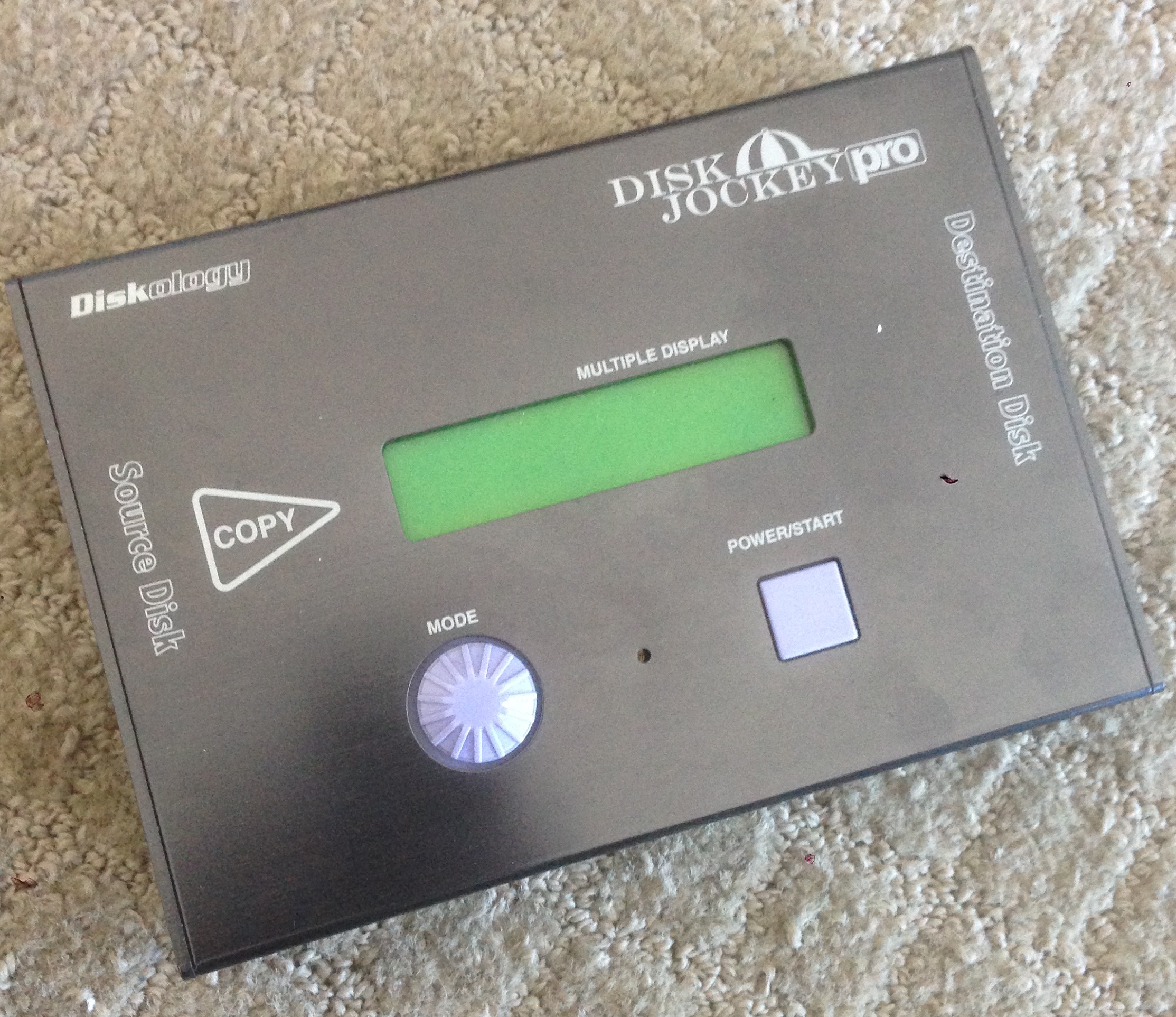 A company called Diskology makes a great product called the Disk Jockey (“DJ”). I own two of these, one attached to my home server, and another on my workstation. This is a fantastic product, albeit with a few minor quirks.

In its simplest form, the DJ operates like any of your run-of-the-mill hard drive dock. Even better, it can function as a two disk dock. On the back are connectors for eSATA and USB, although I tend to prefer eSATA for performance reasons. Scoff at eSATA if you like, and I’ve had my fair share of bullshit with it not working, but this device is rock solid so far as eSATA goes.

When the disk jockey is not plugged in to a computer, it operates as a stand-alone device that can perform a variety of functions: disk copying, wiping, and verification. For any of us who frequently need to duplicate disks, wipe disks, or verify that two disks are identical, these standalone functions are invaluable and a great time saver.

However, the greatest power of the DJ comes from its drive combining options. For example, you can connect two disks to the DJ in what it calls a ‘mirror’ or ‘combine’ volume. When you select one of these options, the DJ then presents itself to your workstation as a logical volume. In the case of a ‘mirror’, it’s a bit like RAID1, and in ‘combine’, it’s a little like RAID0. However, it’s important to realize that the DJ’s ‘mirror’ and ‘combine’ modes are different from traditional RAID.

Mirror: In a traditional RAID1 mirror, the controller has a way to verify the consistency of the volume. That is to say, if you connect two drives in a RAID1, write some data, then remove one drive and replace it with another, it will realize a drive is inconsistent and begin matching up the drives to be consistent with one another. The DJ’s ‘mirror’ mode works differently: any writes go to both drives, but any reads only come from the disk connected to the ‘source’ side of the DJ.

This is an important distinction, because if you manage to connect the wrong disk to the ‘destination’ side of the DJ, it won’t realize that there’s a mismatch and then will blindly overwrite the data there.

We can test this by connecting two disks to the DJ in ‘mirror’ mode and writing a sequence of entirely null bytes to the volume. Examining the disks individually will show that both disks are full of nothing but null bytes. Now, connect one disk of the pair and overwrite the entire disk with hex 0x01. After, reconnect the pair, but keep the disk overwritten on the ‘destination’ side. Write hex 0xFF bytes to the first 512 bytes.

Examining the disks individually will show that both drives indeed have 512 bytes worth of 0xFF at the top. But the first disk will have 0x00 for the remainder, while the second will have 0x01. There is no consistency checking on the DJ.

Combine: This mode of the DJ operates like RAID0, except again, without consistency checking. Thus, it’s easy to accidentally swap the two drives, and the DJ will happily create a stripe without checking that the drives are connected backwards. This isn’t as fatal as in the ‘mirror’ scenario, but can be if the user continues with some kind of write operation.

So long as you’re aware of these quirks, the DJ is an excellent device of superb quality. The mirrored mode is especially useful as part of a on-site/off-site backup strategy. Its standalone functions are great time savers. The eSATA connectivity ensures fast transfer speeds, too. This device is well worth the money.