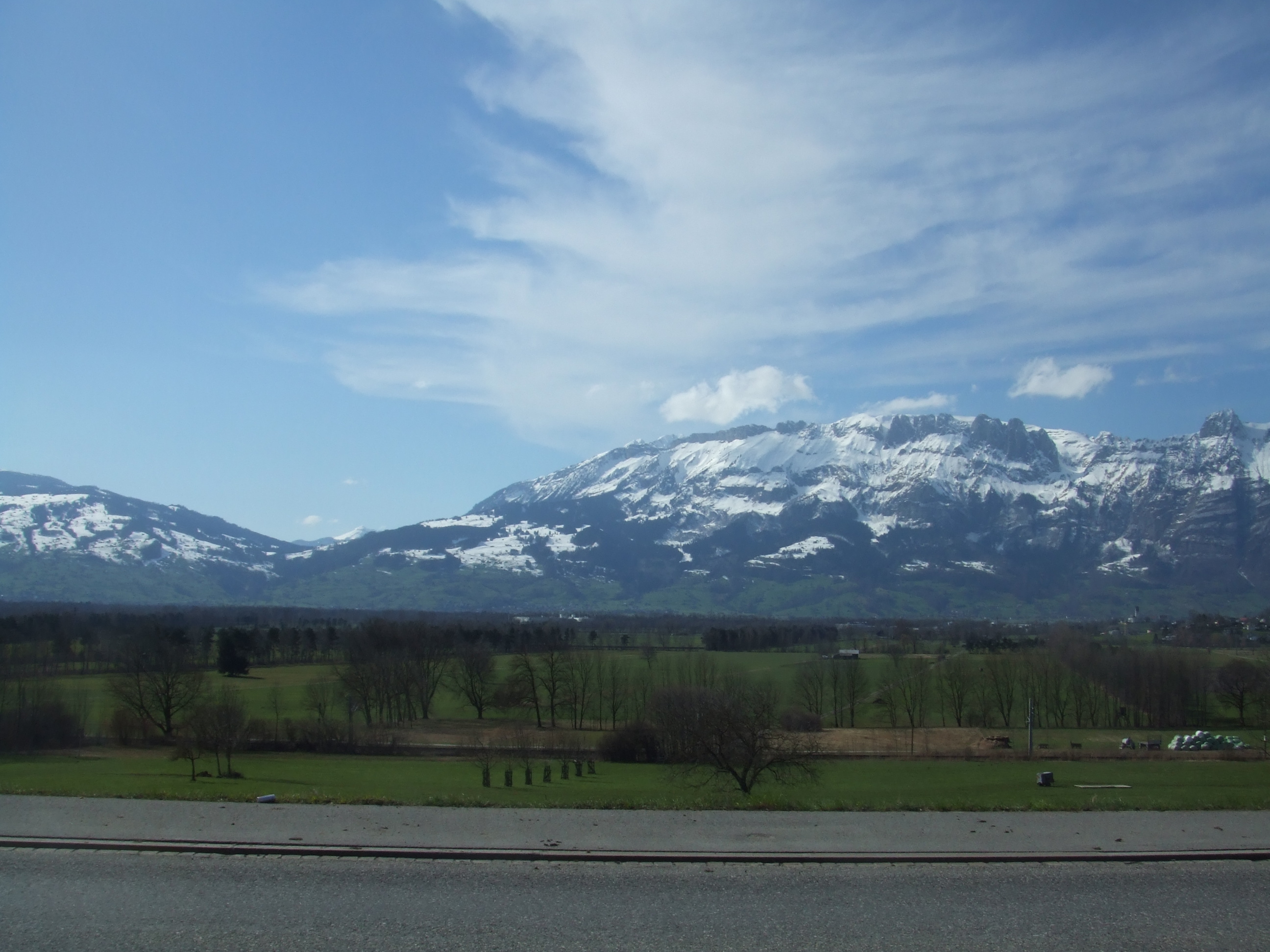 I’ve always wanted to visit a micro-state. There’s just something neat about paying a visit to a truly sovereign country that is smaller than most cities. Liechtenstein is certainly no exception; it’s been settled in one form or another since the Roman days, and has been recognized as a sovereign country for longer than my home country of Canada has.

So, Liechtenstein has always been on my list of ‘must visit’ countries, if only to say that I’ve set foot on the soil there. My original plan called for a train ride from Munich into the heart of Liechtenstein, a short two hour visit, and then back to Munich. But there was something that wasn’t glamorous enough about this plan. It needed something else.

After looking at a map of Liechtenstein, I decided that I could actually walk from one side of the country to the other. An Austrian “OEC” (express) train took me on a breathtaking trip through the Austrian alps from Innsbruck to Feldkirch. After a quick bite to eat at the Feldkirch train station (which turned out to be a very modern, clean facility,) I set off to walk the three kilometers within Feldkirch to the Liechtenstein border. 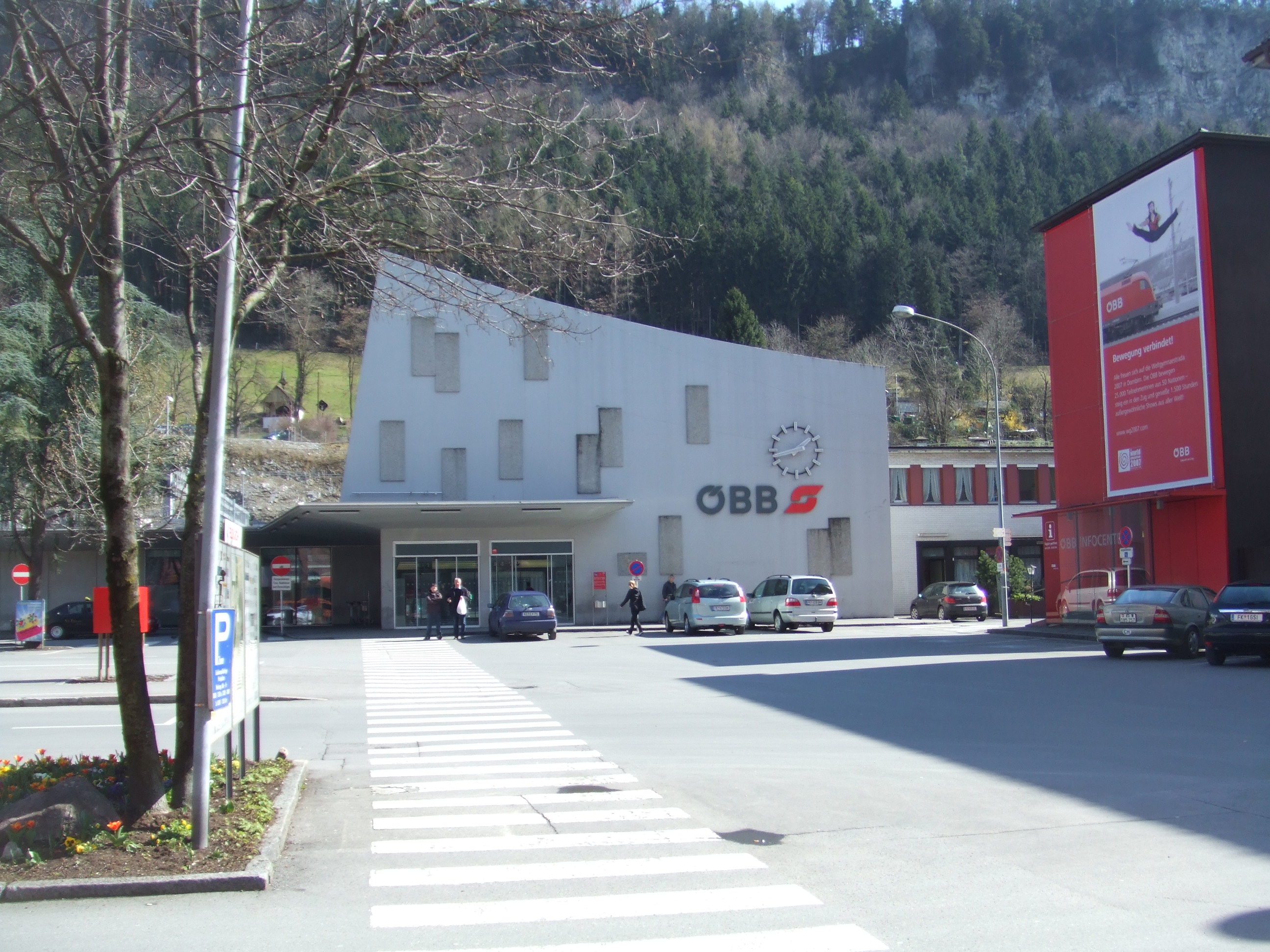 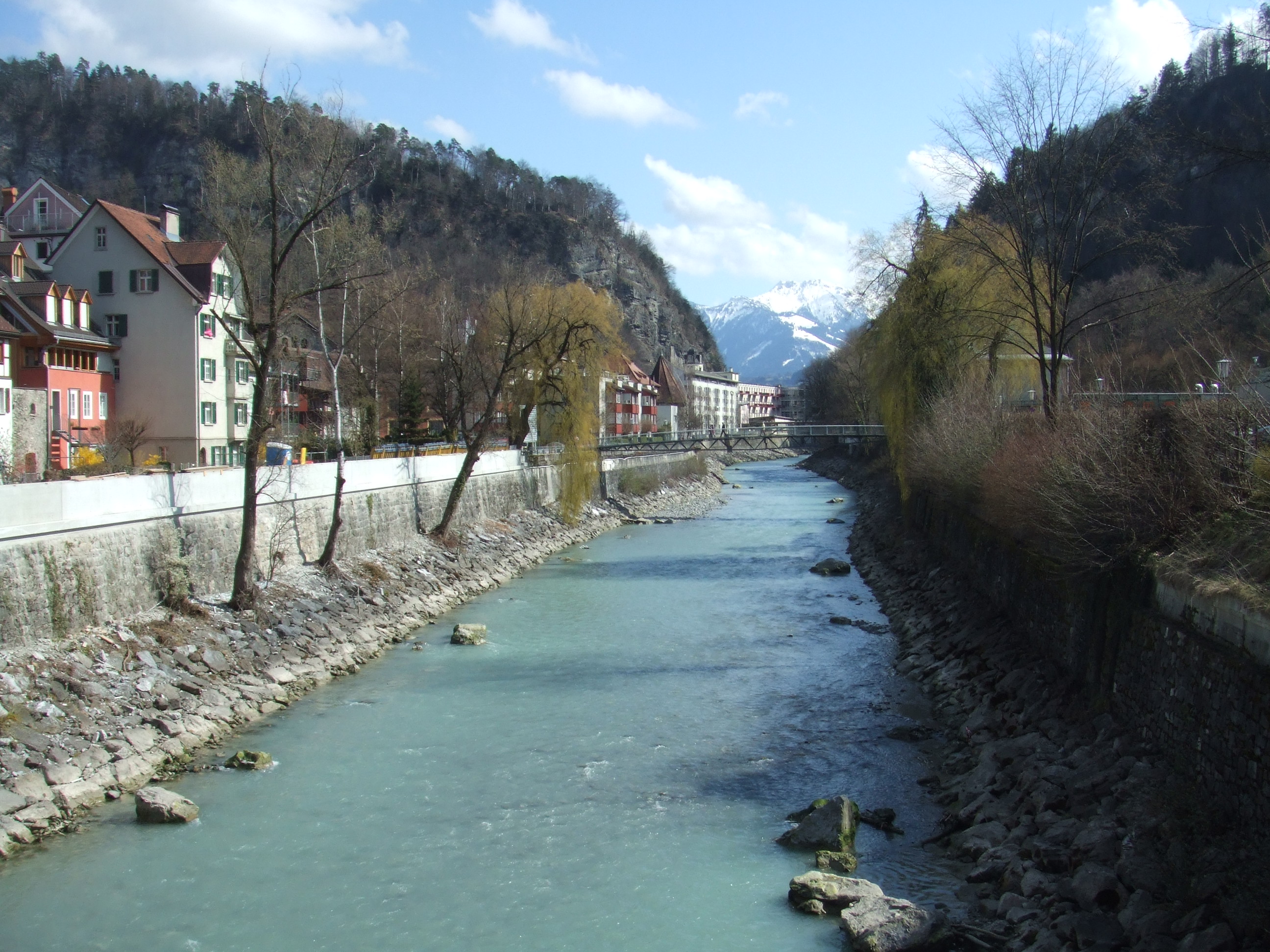 The City of Feldkirch reminded me of the towns of Banff or Jasper in Alberta. It had that nice, high ‘alpine’ feel to it. The water was that ‘national park’ shade of green or blue. The weather was perfect for a hike across a whole country; it was about twelve degrees above and mostly sunny. As I continued to march along, the old European city gave way to a breathtaking view of the Rhine Valley. 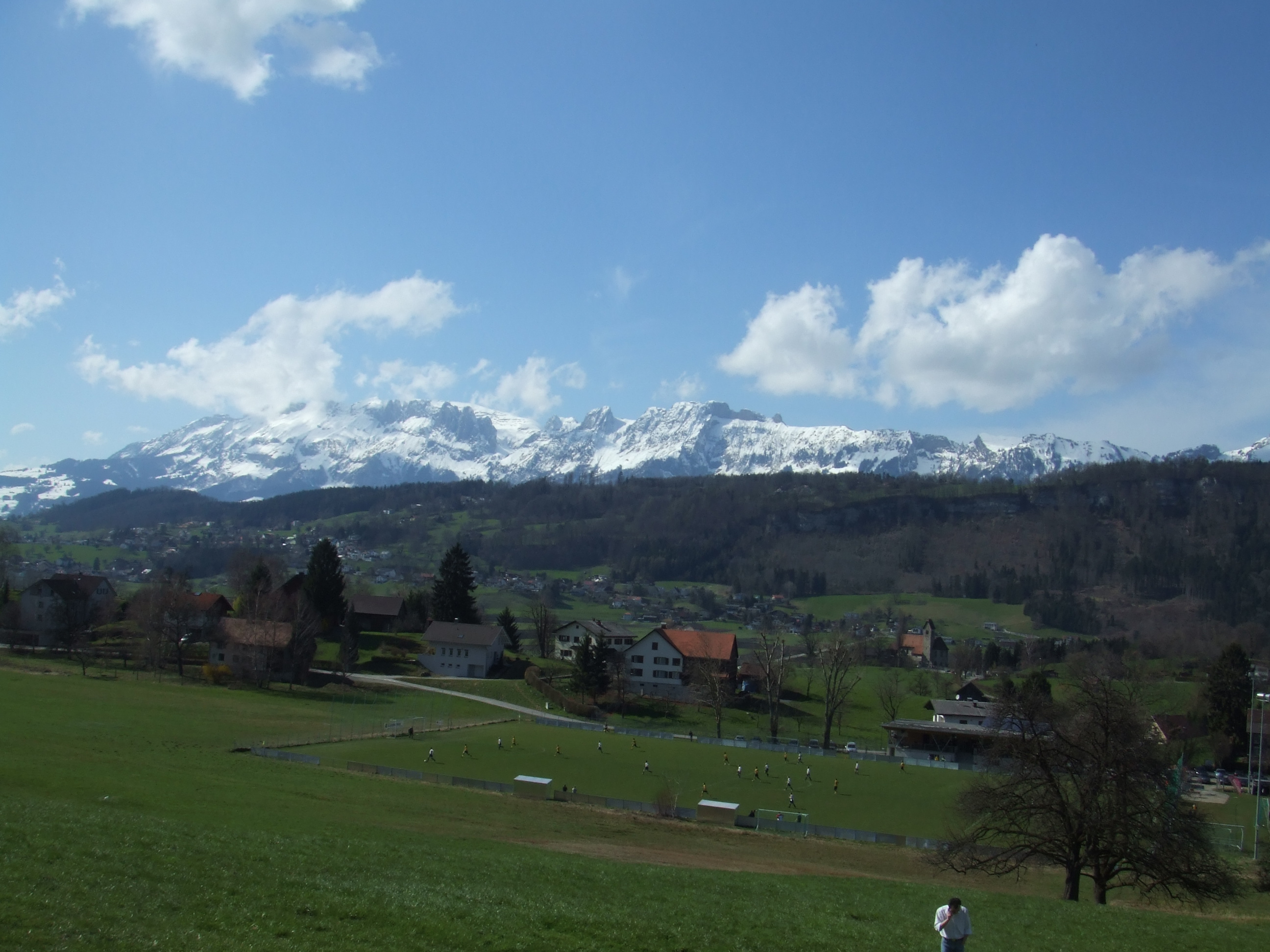 Along the way, you could see people doing all sorts of everyday things. A group of school kids playing soccer, someone walking out of a hardware store with the day’s project supplies, another person lights up a smoke and enjoys the great weather. In this photo, you can see the houses in Feldkirch, Austria in the foreground, and then houses in Schellenberg, Liechtenstein in the background. It also became increasingly clear why people would settle in this area: the Rhine Valley is completely walled in on practically all sides by the towering alps. 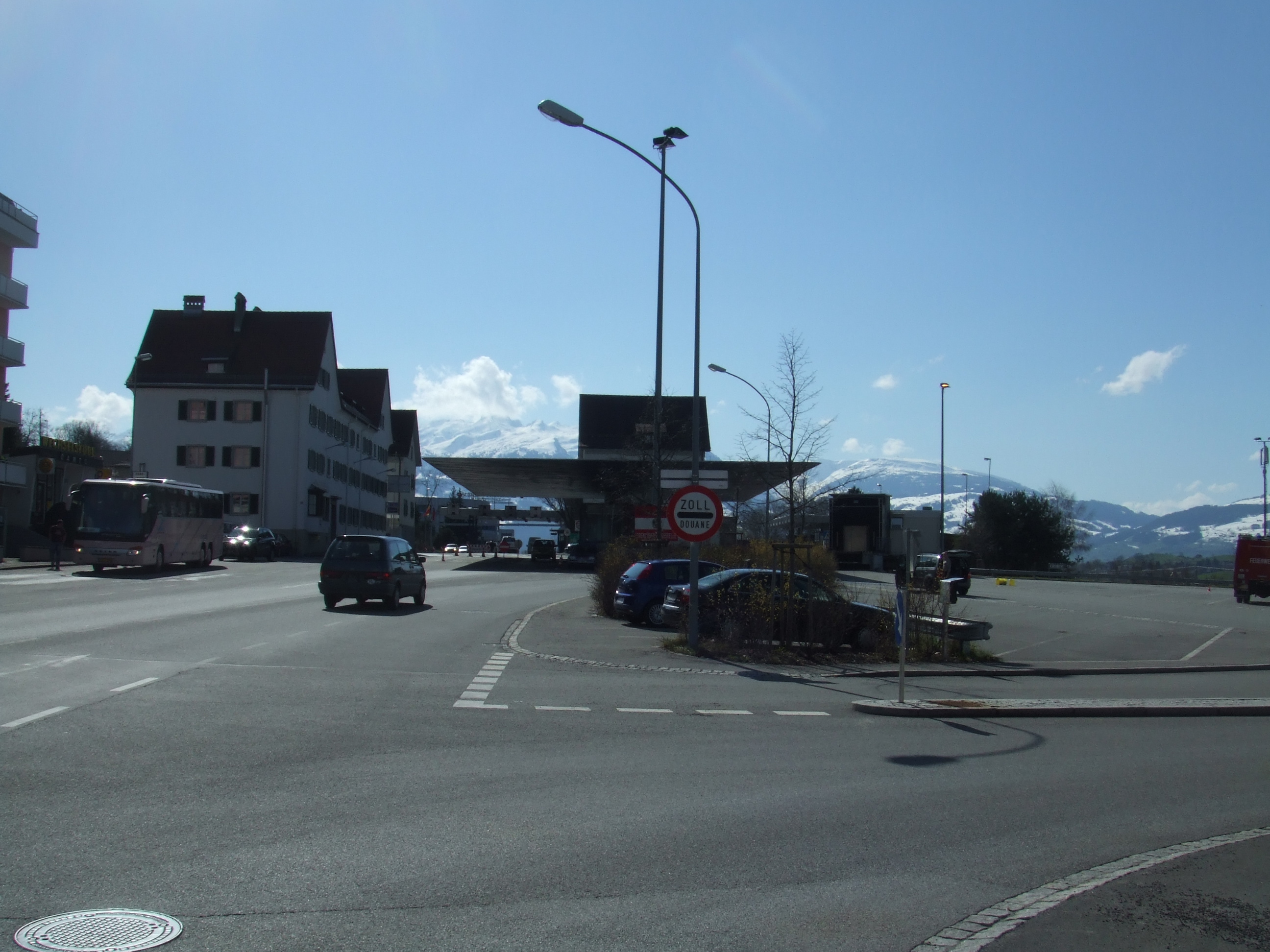 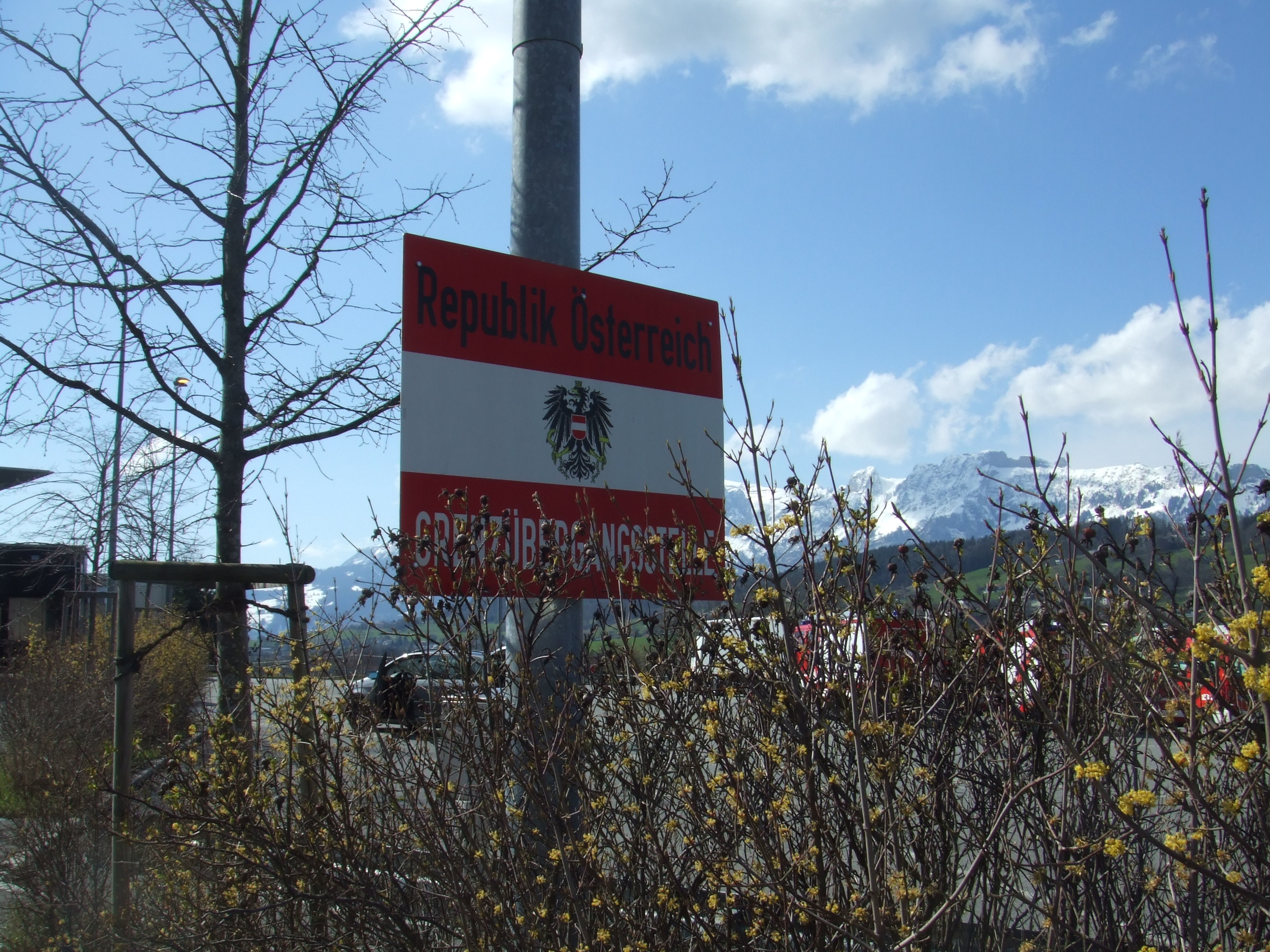 The Principality of Liechtenstein is not a member of the European Union, nor has it implemented the Schengen Agreement which allows free movement of European citizens between sovereign countries. Because of this, there is still a checkpoint at the Liechtenstein-Austria border manned by Swiss guards.

I approached a guard house on foot, and engaged one of the Swiss border agents there. He didn’t seem to be too happy to see me. Whether that was because he was busy doing something else or because I was on foot is still up for debate. I asked the guard if he spoke English, to which he shook his head rapidly and said, “No.” I then frowned and said, “Do I need to show my passport?” The guard sighed and pointed at the desk, motioning that I should put my passport there. I did so, and he scanned it on some sort of imaging device (I presume, to check if I’m a wanted criminal, or something.) He then asked, “Where are you going?” I answered, “Liechtenstein.” That seemed to satisfy him, since he returned the passport and let me go on my way. (The photo to the right shows a sign marking the end of Austria. The word below it, “Grenzuebergangsstelle” means, “Border Crossing Point.” 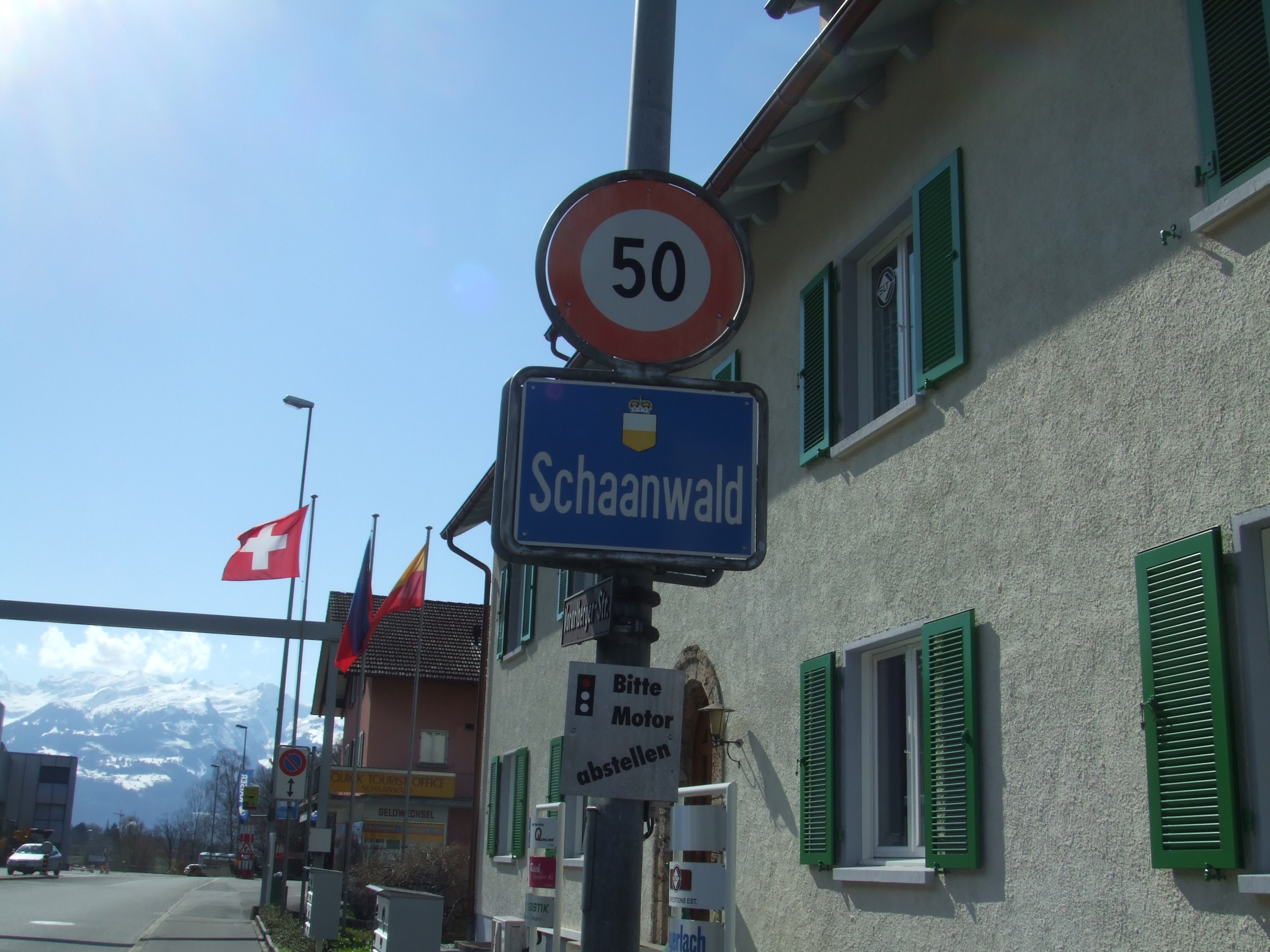 It was at that point that I crossed into the smallest doubly land-locked country in the world, a country with a population barely above the size of a large town or small city. Schaanwald was the first municipality on my trip across the country, a small border town set on a hill looking over the Rhine Valley. I noticed that gas in Liechtenstein was very expensive, almost two Swiss Francs per liter (more than $2.00 Canadian.) The license plates are a simple white on black prefixed with “FL” (Fürstentum Liechtenstein, or “Principality of Liechtenstein.”) 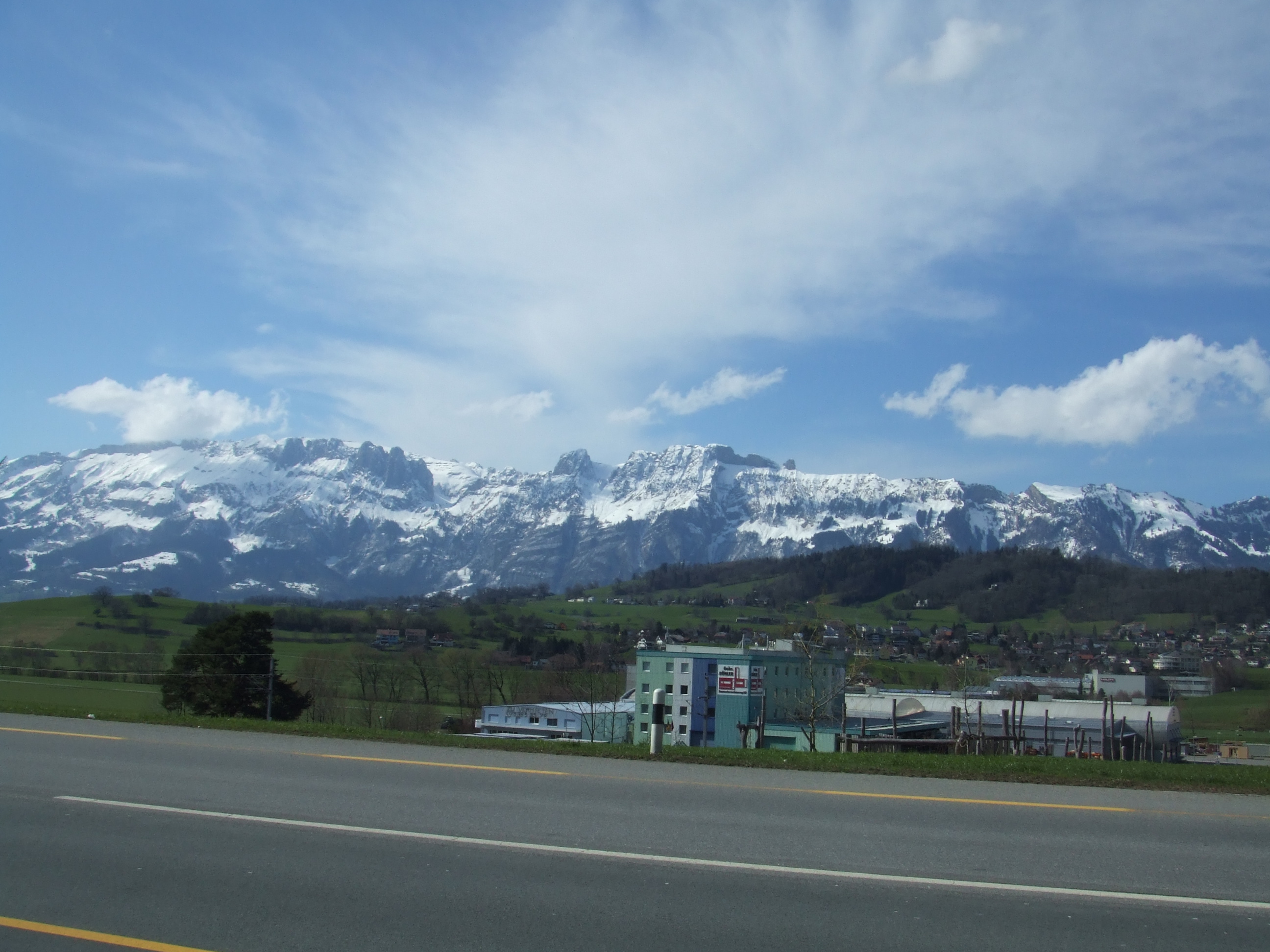 The Liechtenstein countryside is simply a pleasure to hike through. There are multitudes of hiking and biking trails everywhere. The country capitalizes on its natural beauty extensively, promoting all kinds of outdoor activities. It’s almost a shame that I only had five hours to spend in Liechtenstein before I had to catch a train in Switzerland.

I hiked through the small town of Schaanwald, and then the even smaller town of Nendeln. The houses and side streets gave way to a highway that wound its way down around the side of a mountain, into the Rhine Valley. Thanks to the great weather, there were a large number of bikes and motorcycles in attendance. The majority of vehicles on the road were from Liechtenstein, with a healthy minority from Austria, Switzerland, and Germany. 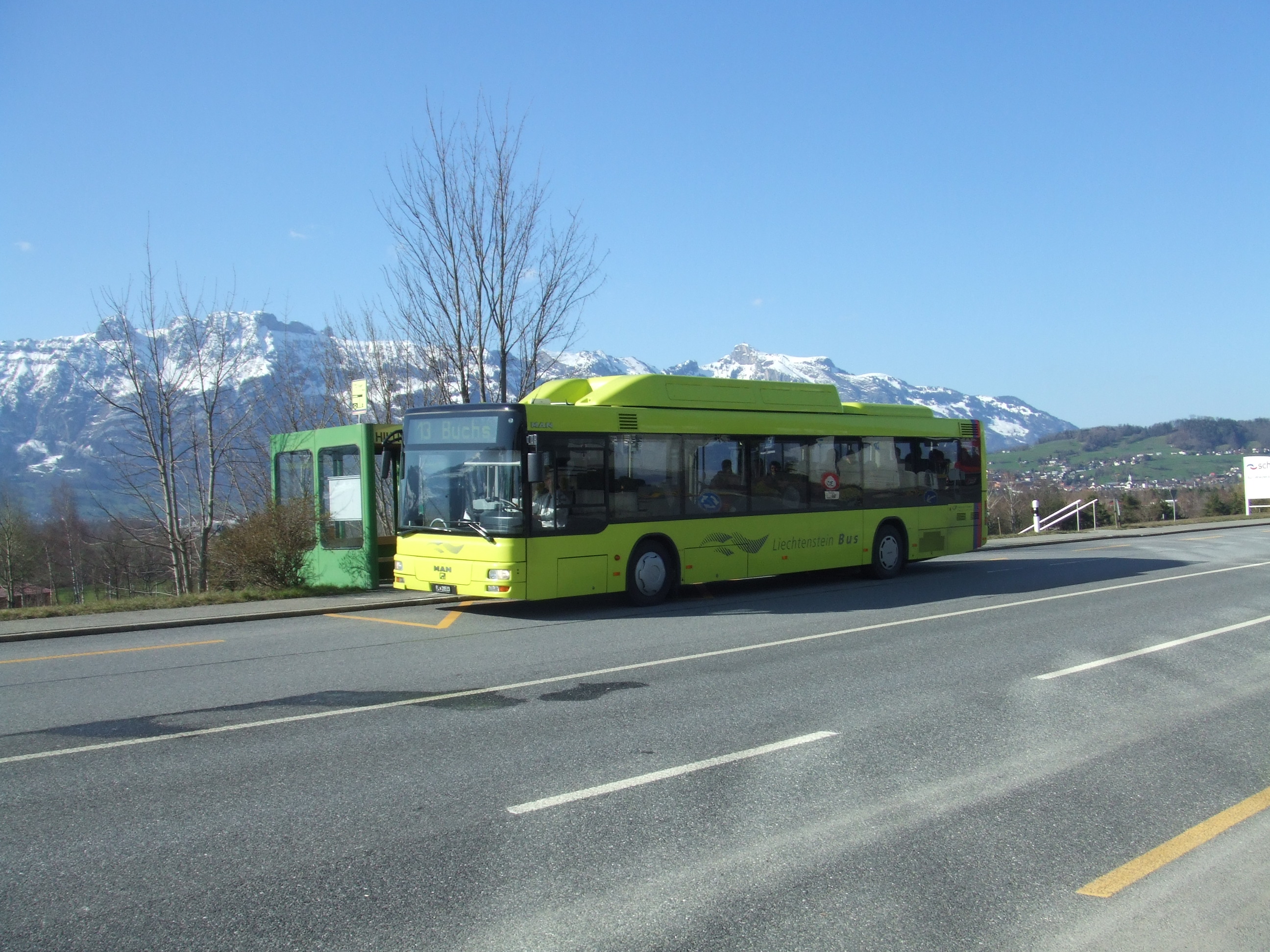 The Principality also has a fantastic transit system. It was great that I was walking from one end of the country to the other, but it would be very easy to catch a bus along the same route. In this photo, you can see the distinctive neon green ‘Liechtenstein Bus’ picking up a passenger across the street from one of the Hilti offices. (Hilti is the largest employer in all of Liechtenstein.) The bus starts in Feldkirch, Austria, goes across Liechtenstein, and ends in Buchs, Switzerland. Thus, this ordinary transit bus crosses two international borders many times in the course of a day. 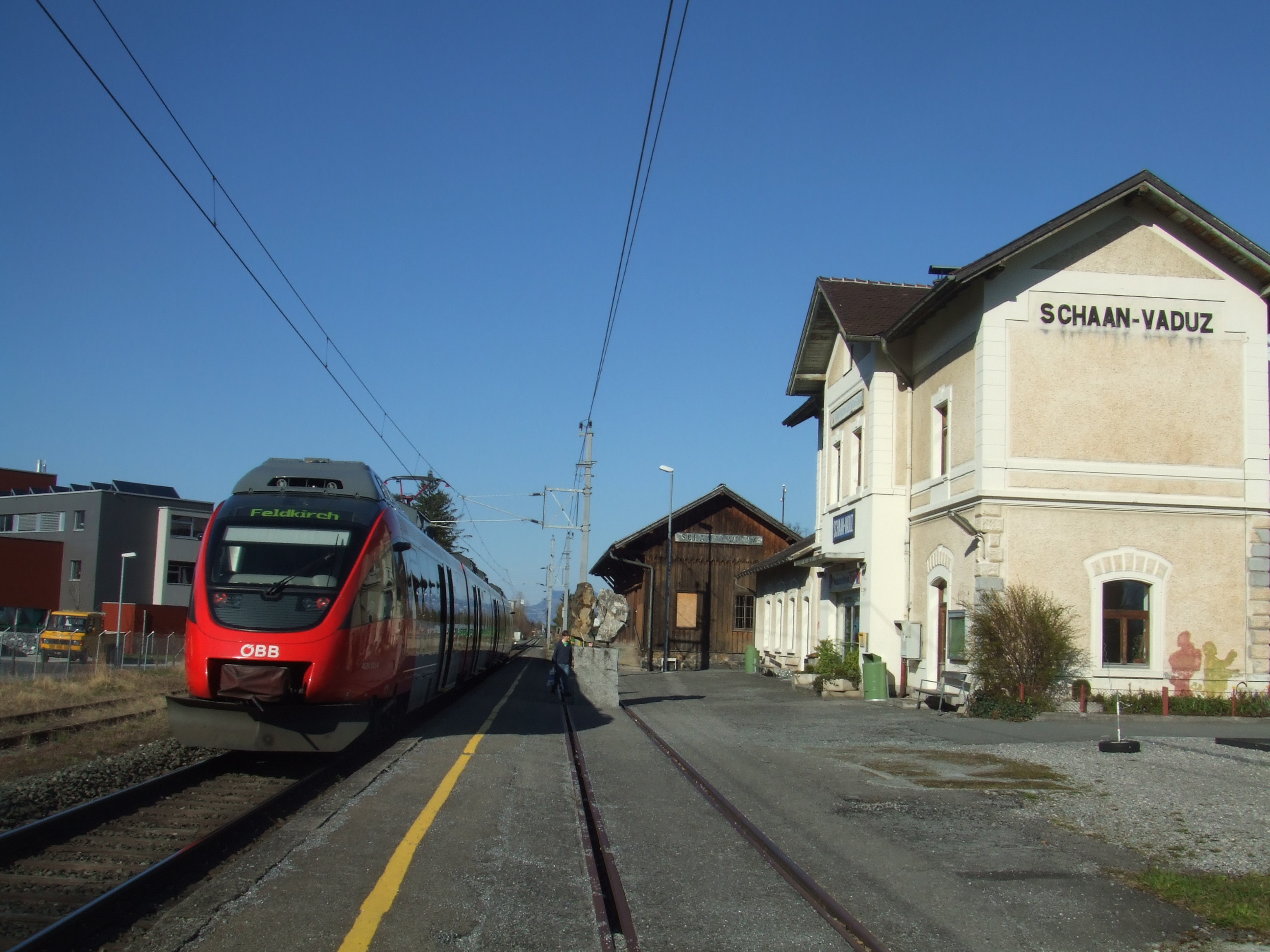 It would have been a great honour to take the bus or train across Liechtenstein, but walking across made the whole journey more interesting. I eventually made it to the city of Schaan, just north of the capital of Vaduz. It was here where I originally intended to take a train. In the above photo, you can see an Austrian train pulling in, stopping on its way to Feldkirch. The railway line that cuts across Liechtenstein (more or less following the same route I was hiking,) is owned by the Austrian railway company. Like the Liechtenstein Bus, several trains travel from Switzerland to Austria (and vice-versa) via Liechtenstein every day. 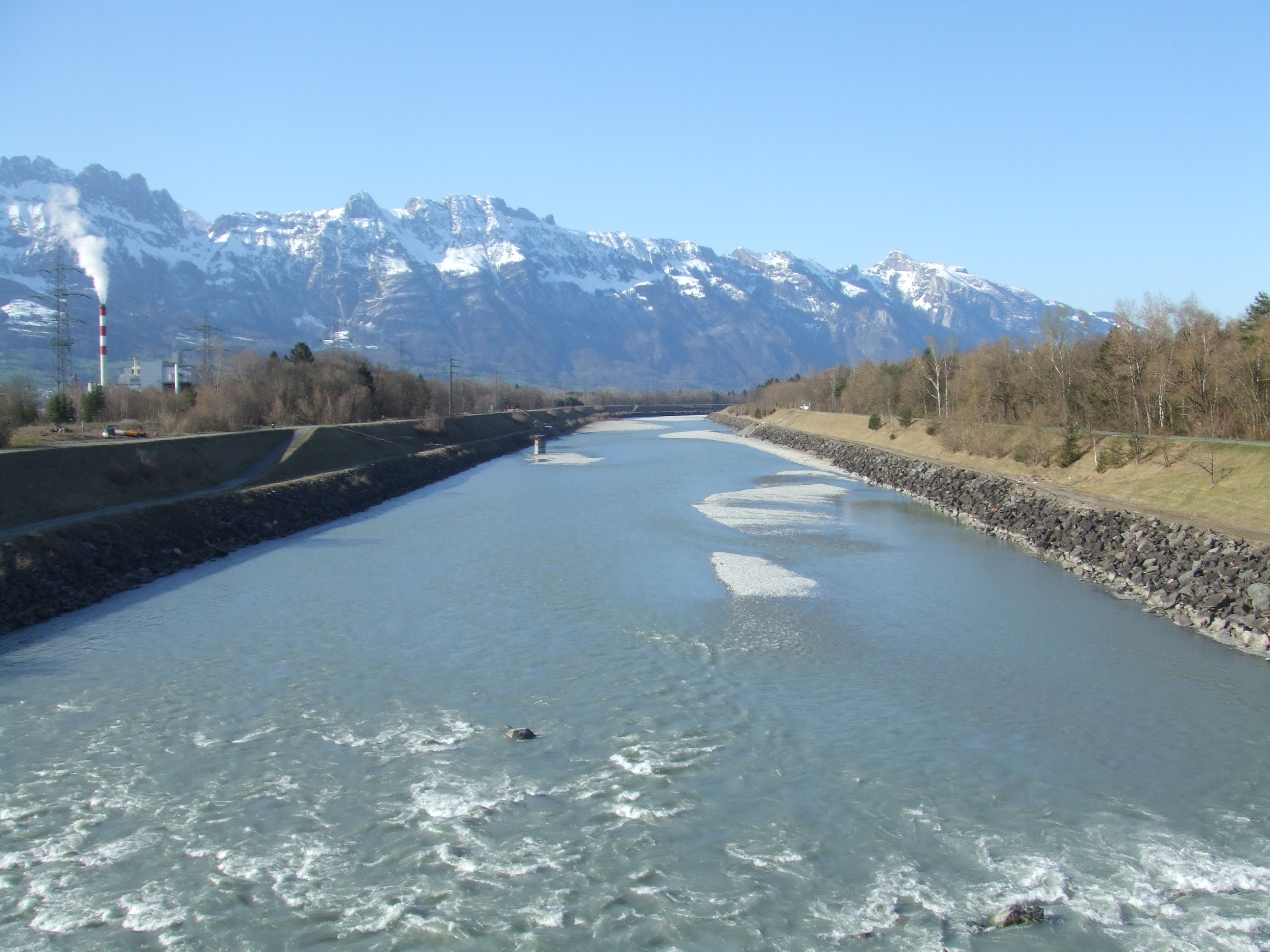 The city of Schaan gave away to the countryside as I continued on, this time looking more like the Fraser Valley than anything else. It wasn’t much more of a walk before I came upon the bridge that crossed the Rhine, marking the western border of the Principality of Liechtenstein. In the above photo, the land to the right is Liechtenstein, and to the left is Switzerland. I had crossed the whole width of the country in about two hours.

I also have to apologize for the poor quality of the photo below, the sign demarcating the beginning of Switzerland. As you can see, the sun was already relatively low on the horizon, making it difficult for me to get a good shot of the demarcation sign and Swiss flag. There are no border controls on the Swiss-Liechtenstein border, since the Swiss guards check everything on the Austrian-Liechtenstein side. 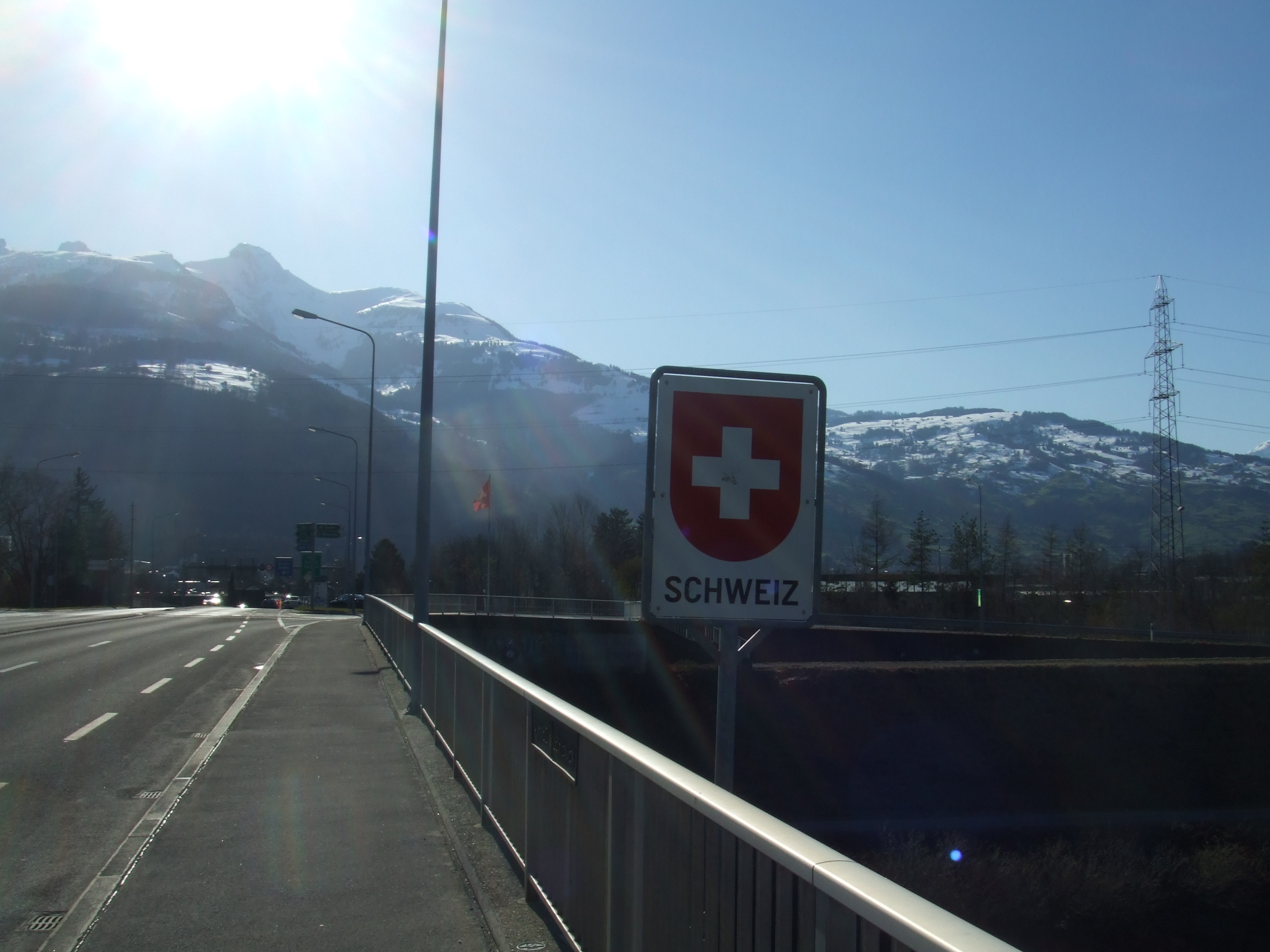 From the bridge it was only a short walk over to Buchs, a town on the eastern border of Switzerland. At the point that I crossed into Switzerland, I had set foot on four separate countries in one day (Germany, Austria, Liechtenstein, and Switzerland.) The picture to the right looks back at the border from Switzerland (the little circular sign on the bridge marks the border,) with a Liechtenstein bus straddling the border in transit to Buchs, Switzerland. I looked back on the Principality one last time before continuing my journey to the Buchs Hauptbahnhof (Central Station,) to endure four more hours on the train back to Munich. 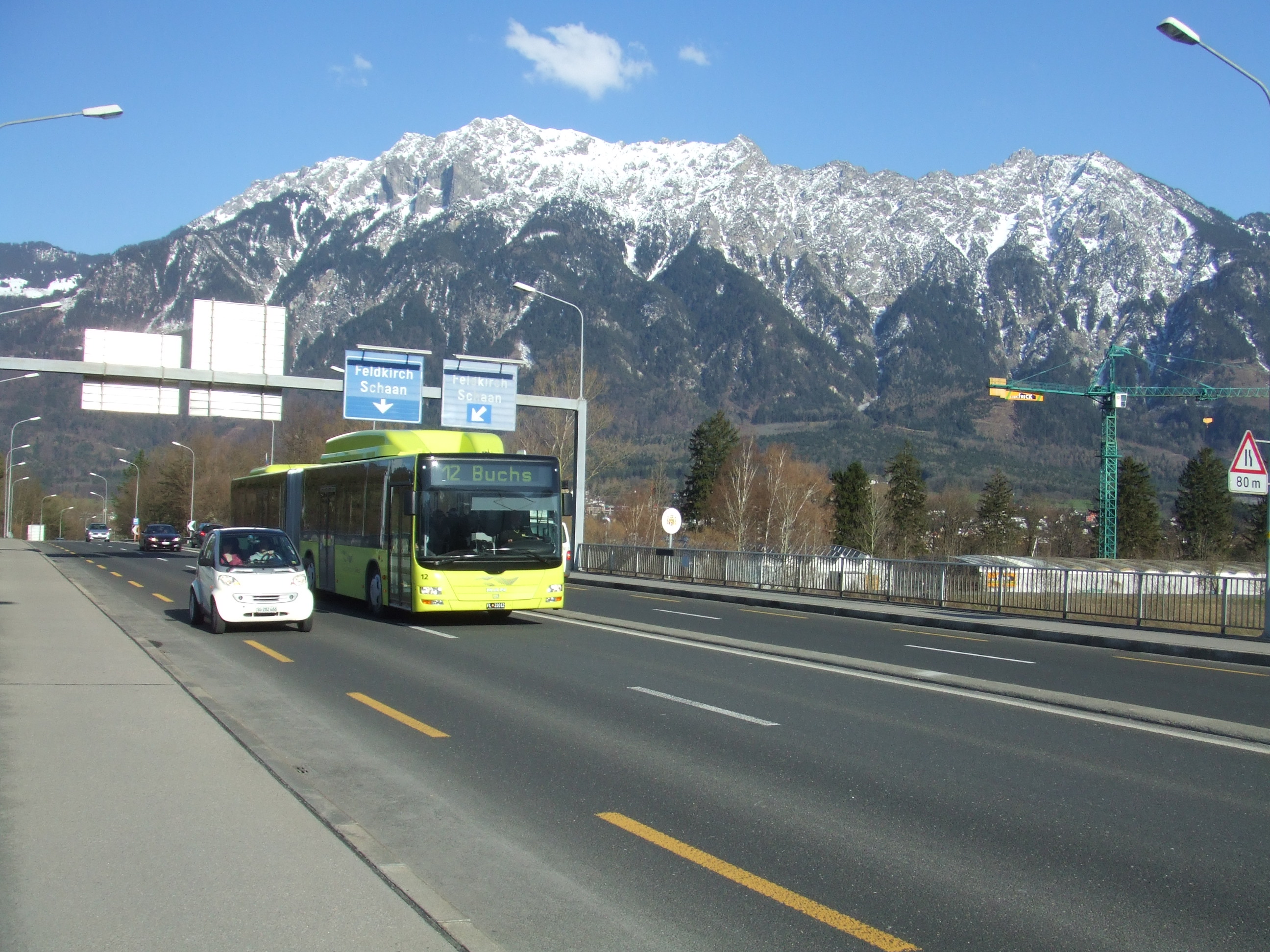