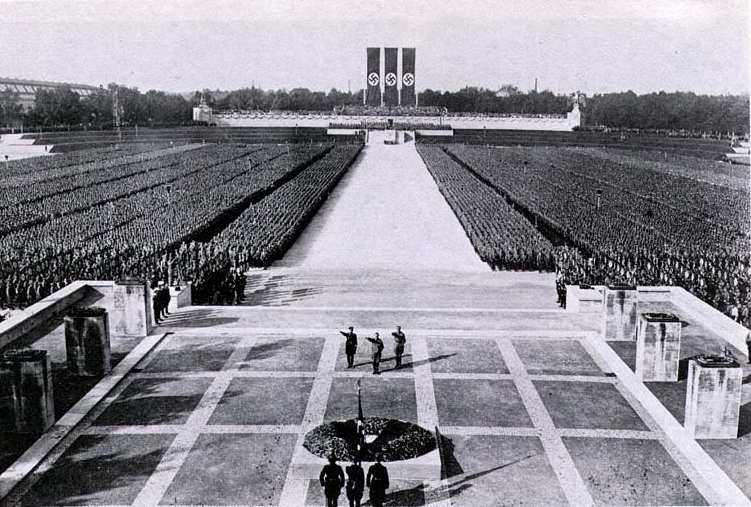 It’s February 6th, 2008, and I’m in Nuremberg, Germany. Being such a fan of history (mostly cold war history, but World War II history piques my interest as well,) I never thought that I’d be in a place so rich with history. Not just World War II history, but ancient Roman history, and medieval history as well. I’ve been here for the past week on an assignment for the company I’m employed by. The hours have been long, which hasn’t given me a whole lot of time to explore my surroundings, but this is my first Saturday off and I wasn’t about to miss the opportunity to go exploring.

My target today is the former Nazi Party Rally Grounds. The grounds take up more than five square kilometers of space, so I allocated most of the day to the purpose of finding each of the most important relics and photographing them, if only to say that I’ve been there. It’s doubtful that I’ll be in Germany ever again, so I’d best take the opportunity while I have it.

Canada is rich with history as well, but it’s entirely a different kind of history. Mostly, Canadian history involves explorers and settlers, stories similar to old westerns. Certainly not anything close to having hundreds of thousands of soldiers meeting in one place to watch their Führer speak. 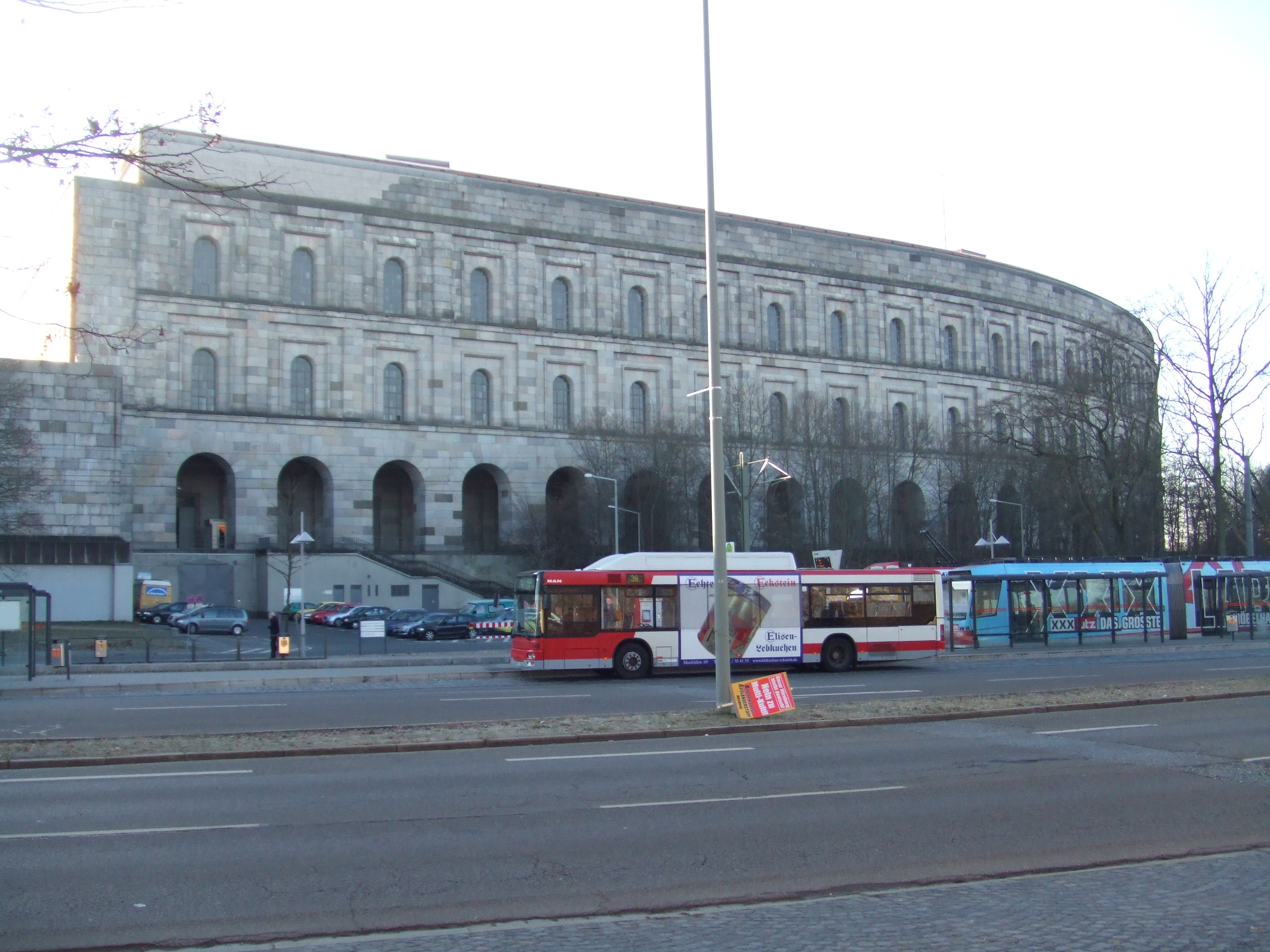 It was a cool day in Nuremberg, -9 degrees Celcius when I left my hotel. Having survived -30 or worse this winter back home, the temperature combined with the brilliantly clear day made it feel like spring. I took the number nine tram to the Documentation Center located in the massive Congress Hall built by Hitler to look like the Roman Coliseum. As the tram rounded the corner to my stop, I knew that I had found the right place.

I knew the place was going to be big, but I wasn’t as prepared for how ominous the thing looked. I also knew that Hitler had a penchant for large, monolithic structures that conveyed power. But I was still somehow unprepared when the tram went around that corner.

My first stop was to see the Ehrenhalle, or ‘Hall of Honour.’ The monument was originally built to honour fallen soldiers of World War I, but Hitler perverted it during the Third Reich to memoralize those who ‘sacrificed their lives’ in the founding of the Nazi party. It became just one of many fantastical gatherings of tens of thousands of soldiers during the Nuremberg Rallies. 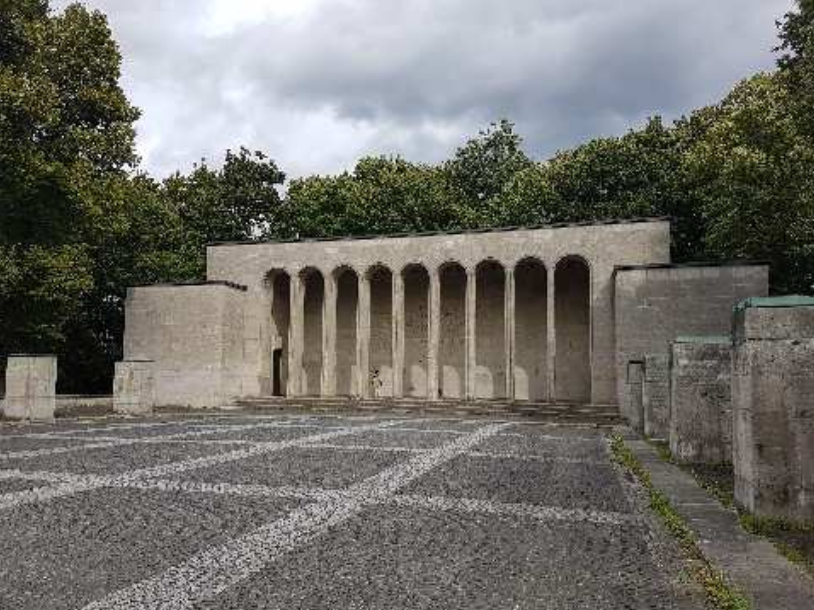 I then turned around to take a stroll across the old Luitpold Arena, now a park for people to walk their dogs or have a picnic lunch. On the face of it, you’d have no idea that this great bowl of trees, grass, and dirt hosted some of the most fearsome military rallies on Earth. Just taking that walk gave me a great sense of the distances involved, and how many soldiers you could pack into such an area. The great rows of seats on the opposite end of the arena were torn down after the war. However, bits and pieces of it can still be found embedded into the hillside. I always knew that Hitler was a big fan of solid granite for all of his construction projects, but I never had an appreciation for how distinctive granite really is. For the rest of the day, it was easy to pick out relics from the Nazi era, if only by the granite appearance alone. 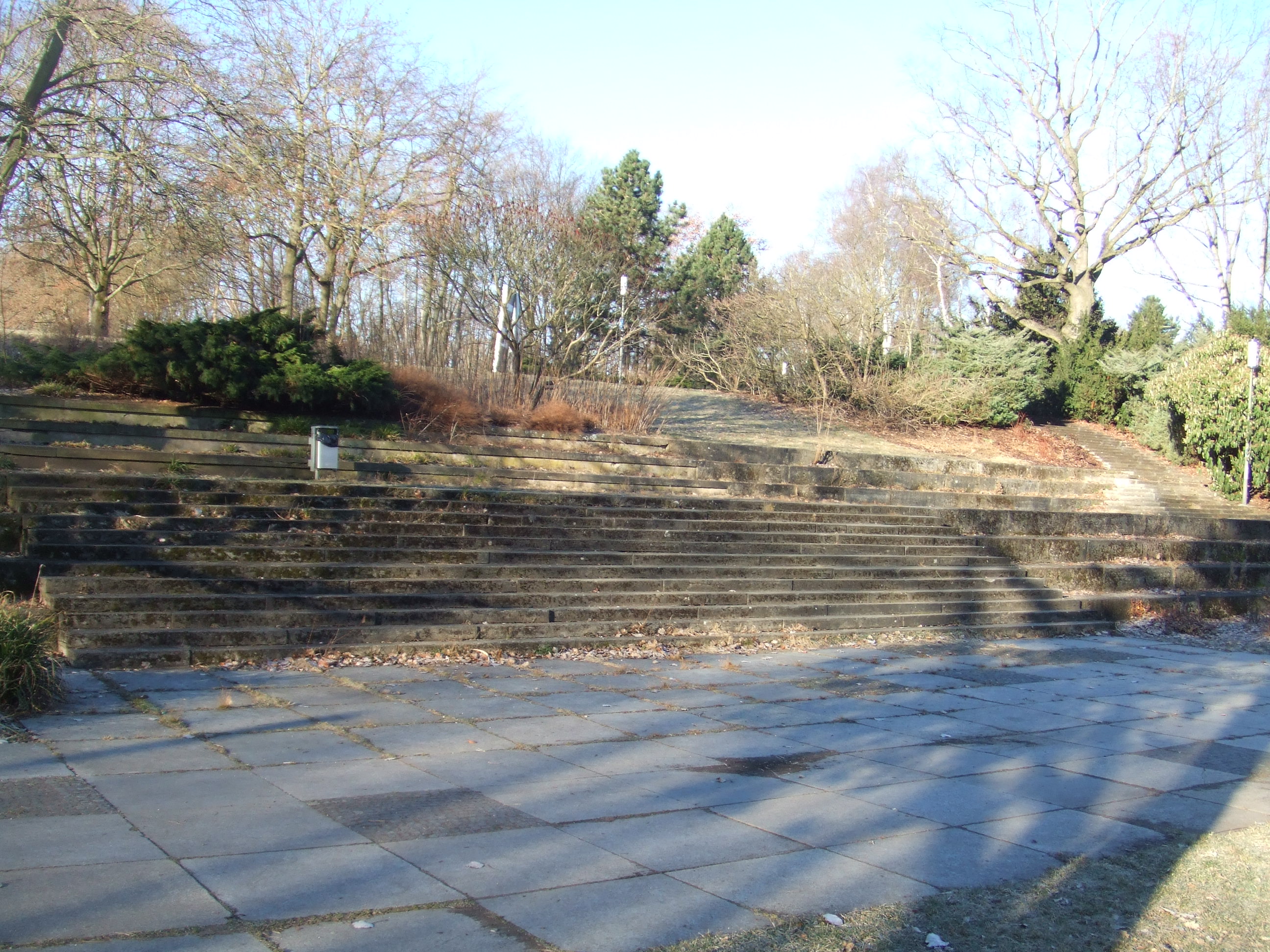 From there, it was time to walk back past the great Congress Hall and the Documentation Center (which wasn’t scheduled to open for another hour) to the Zeppelin Field.

If you’ve seen an old black-and-white video of Hitler making a speech (in his trademarked shouting/commanding style,) then it’s likely that he was speaking from his podium at the Zeppelin Field. This was the first Nazi structure to be built, and perhaps the most famous of them all. 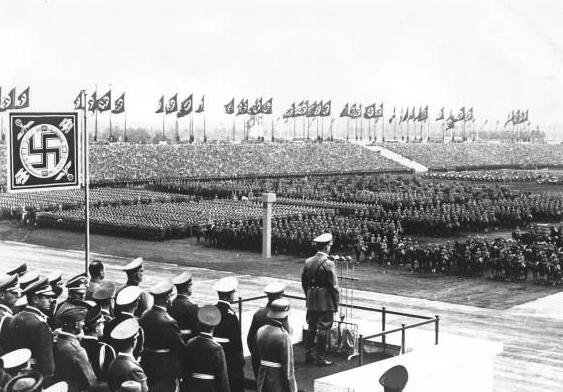 Today, the Zeppelin Field is slowly decaying. Apparently, it was constructed in a hurry, which has caused the City of Nuremberg to remove bits and pieces of it to make it a little more safe. The podium where Hitler stood has been reconstructed, so while that’s not the exact spot he made his speeches, it is a close enough approximation. Fortunately, unlike the Ehrenhalle, the Zeppelin Tribune was open to anyone wishing to have a look, so I took some photos. 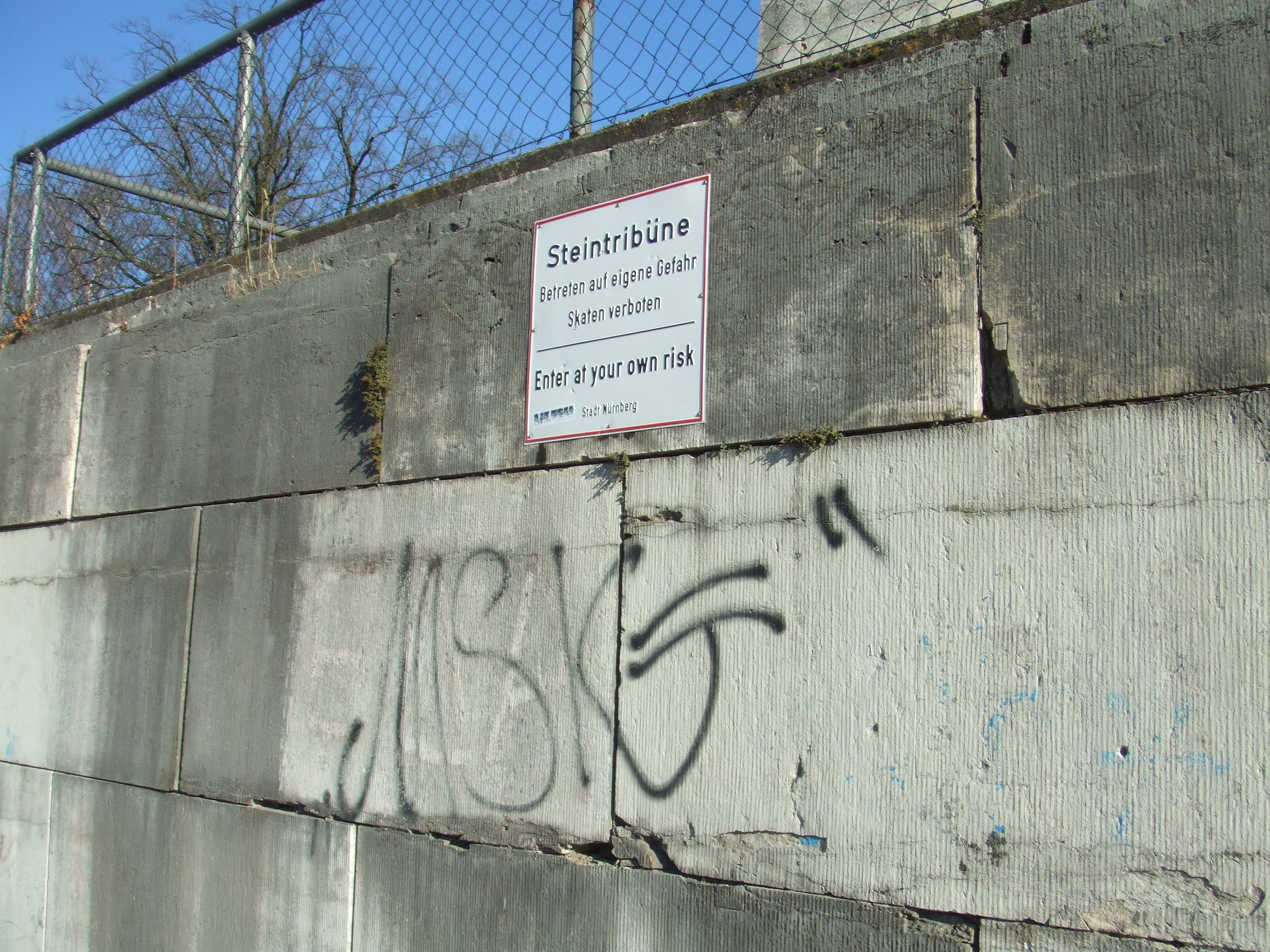 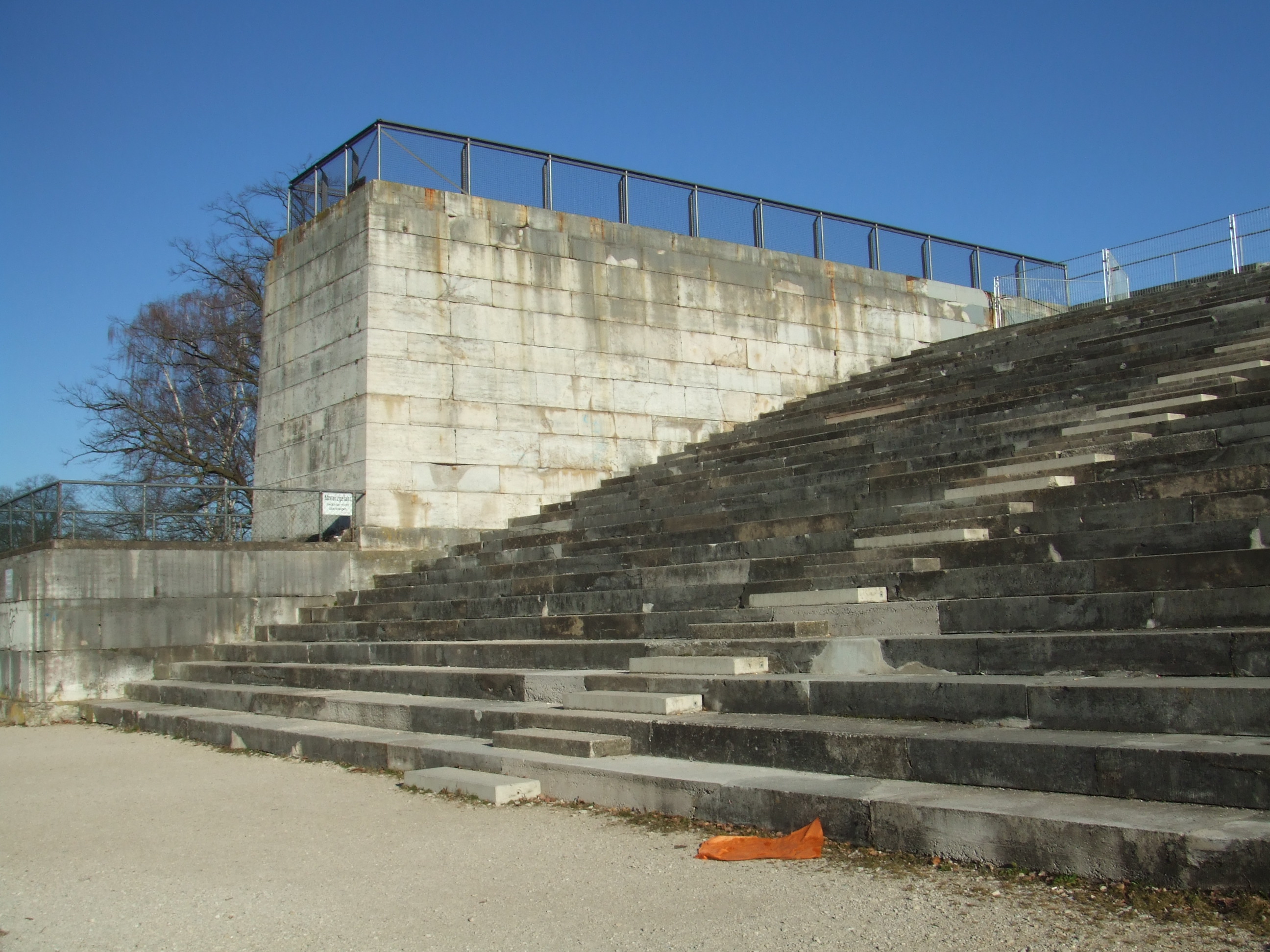 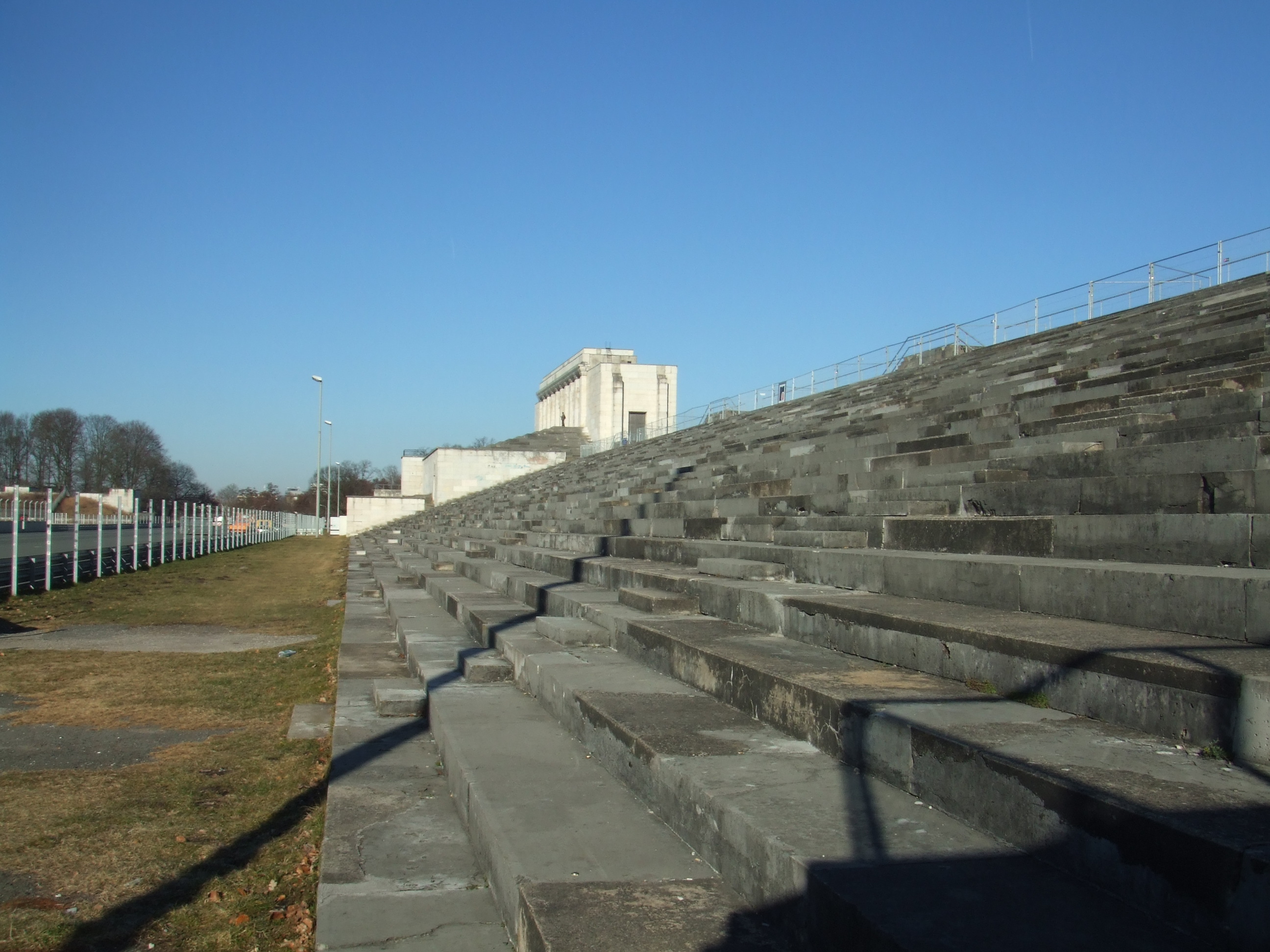 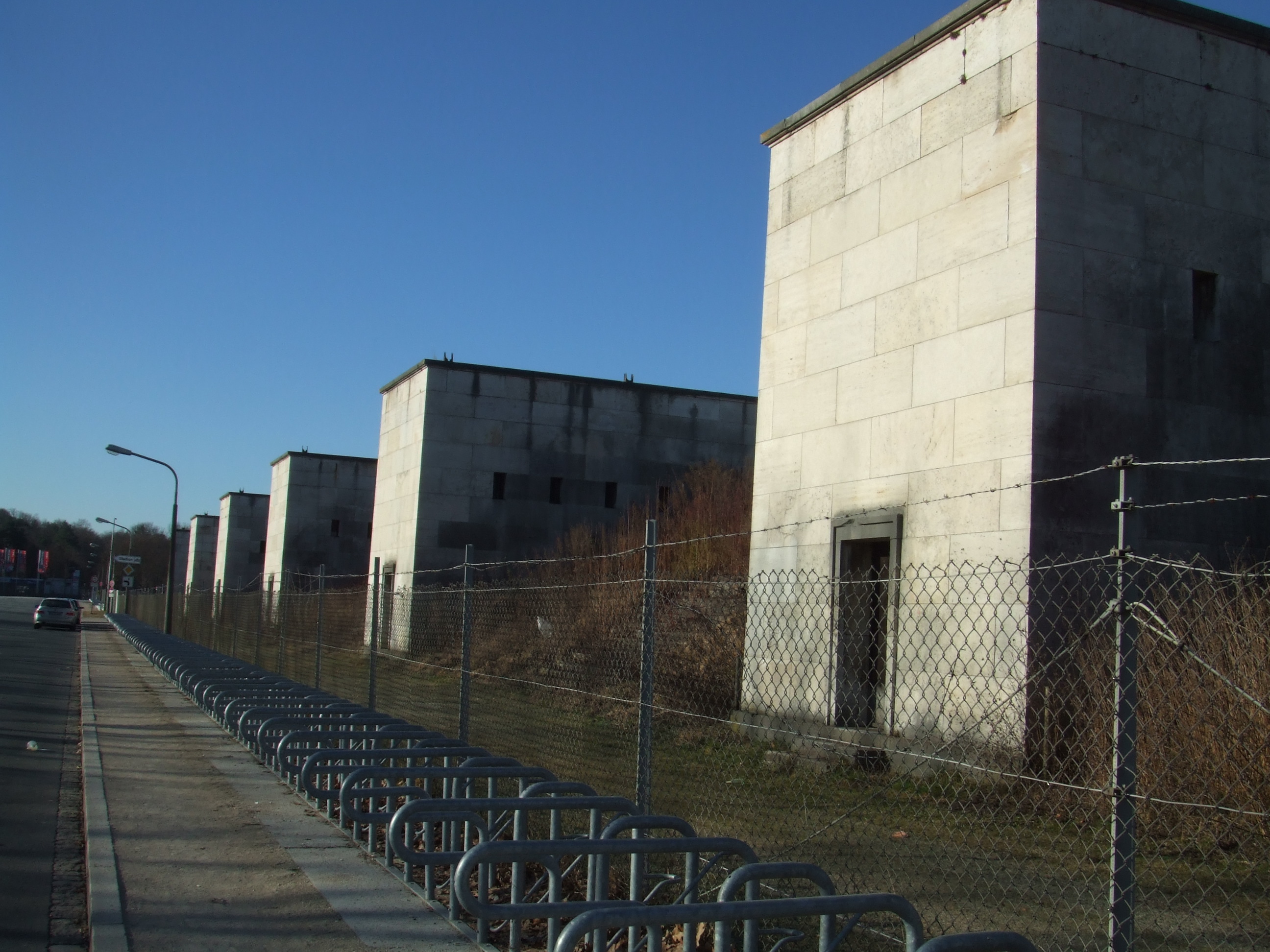 Next, I turned West towards the “Grosse Strasse”, a wide avenue tiled with solid granite blocks. Hitler originally intended for this street to be two kilometers long, used for parading troops and other military implements between a corridor of people lined up to see the spectacle. Only 1.5 kilometers of the road was completed, and it was never used for its intended purpose. I did, however, walk its entire length back to the Congress Hall. It was here where I entered the Documentation Center, a sort of museum established by the City of Nuremberg to document the concequences of Nazism and to preserve the history of the Nuremberg Rally Grounds. Although the information inside of the Documentation Center is well presented, very little of it was news to me. Of course, not everyone is a major history fan like I am. Never the less, it was well worth the five euro admission fee. 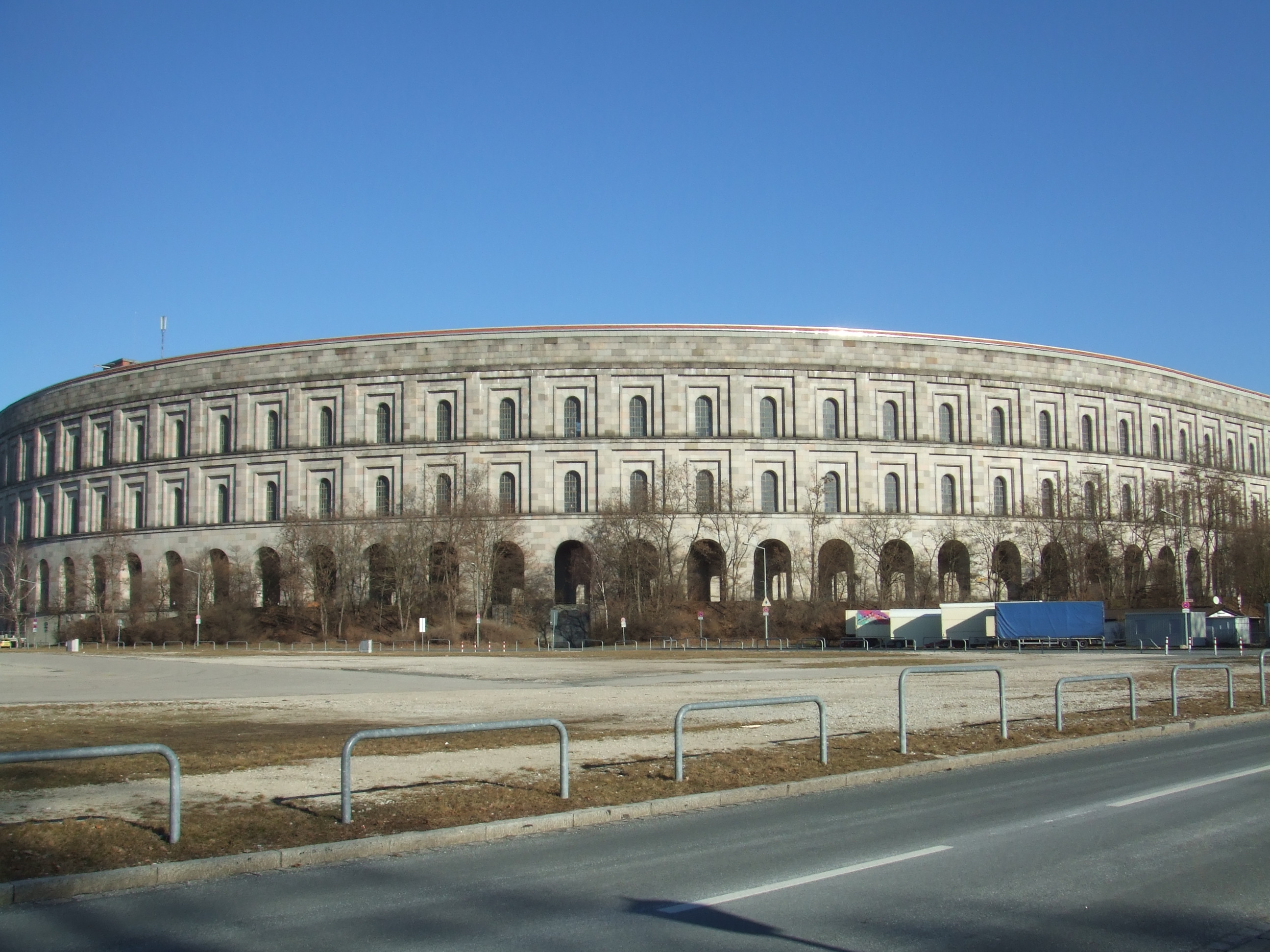 There also wasn’t much within the Documentation Center that was worth photographing. I was also a little disappointed that there was no option to receive a tour of the Congress Hall itself (the Documentation Center is in a small corner of the building.) They did, however, have a viewing deck that overlooked the inner courtyard of the Congress Hall. As you can see from the picture, only the outer layer of the building is granite — everything else was constructed by using regular brick. I was quite hungry after a whole day of exploring the old rallying grounds, so, I decided to go in search of a rather unusual artifact of the Nazi era. The building shown in the photo to the left used to be a power substation created solely for providing power to the over one-hundred spotlights used during the “cathedral of light” at Zeppelin Field. In the photo, you can clearly see where the Nazi eagle perched atop a swatstika was chiseled off of the building. 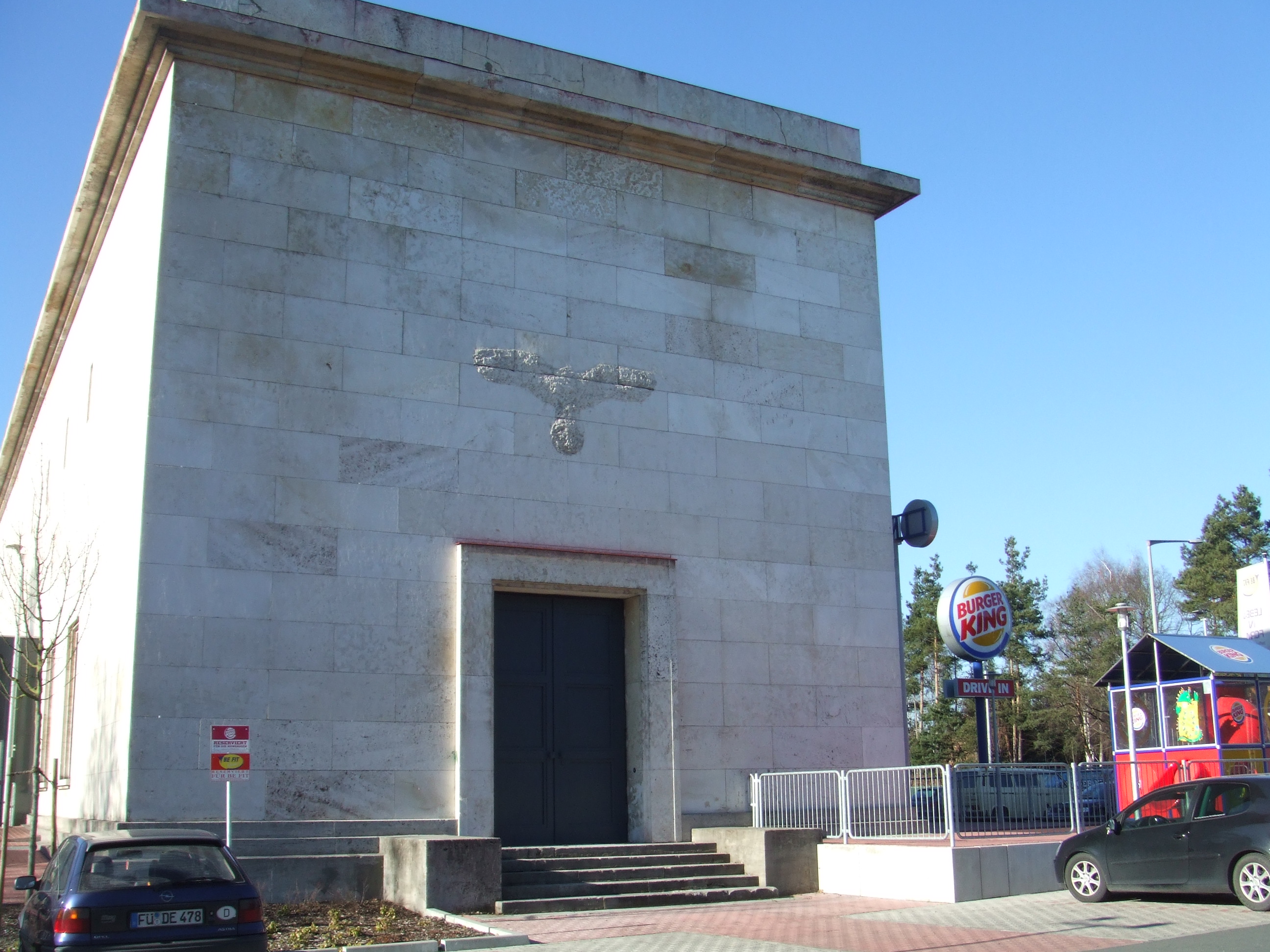 The spotlights used in the creation of the cathedral of light required so much power that its own power substation had to be built. Now, it’s a Burger King fast food restaurant. To be able to have lunch in such a historic building was special in its own right. Most people buying burgers here had no clue about what purpose the building served. 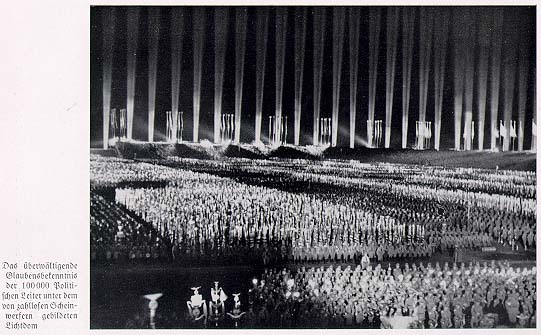 That’s it for now. As I’ll be in Nuremberg for some time, no doubt I will be adding more photos and information here as time goes along. In the meanwhile, here are some more photos of the Congress Hall that I couldn’t fit in anywhere else: 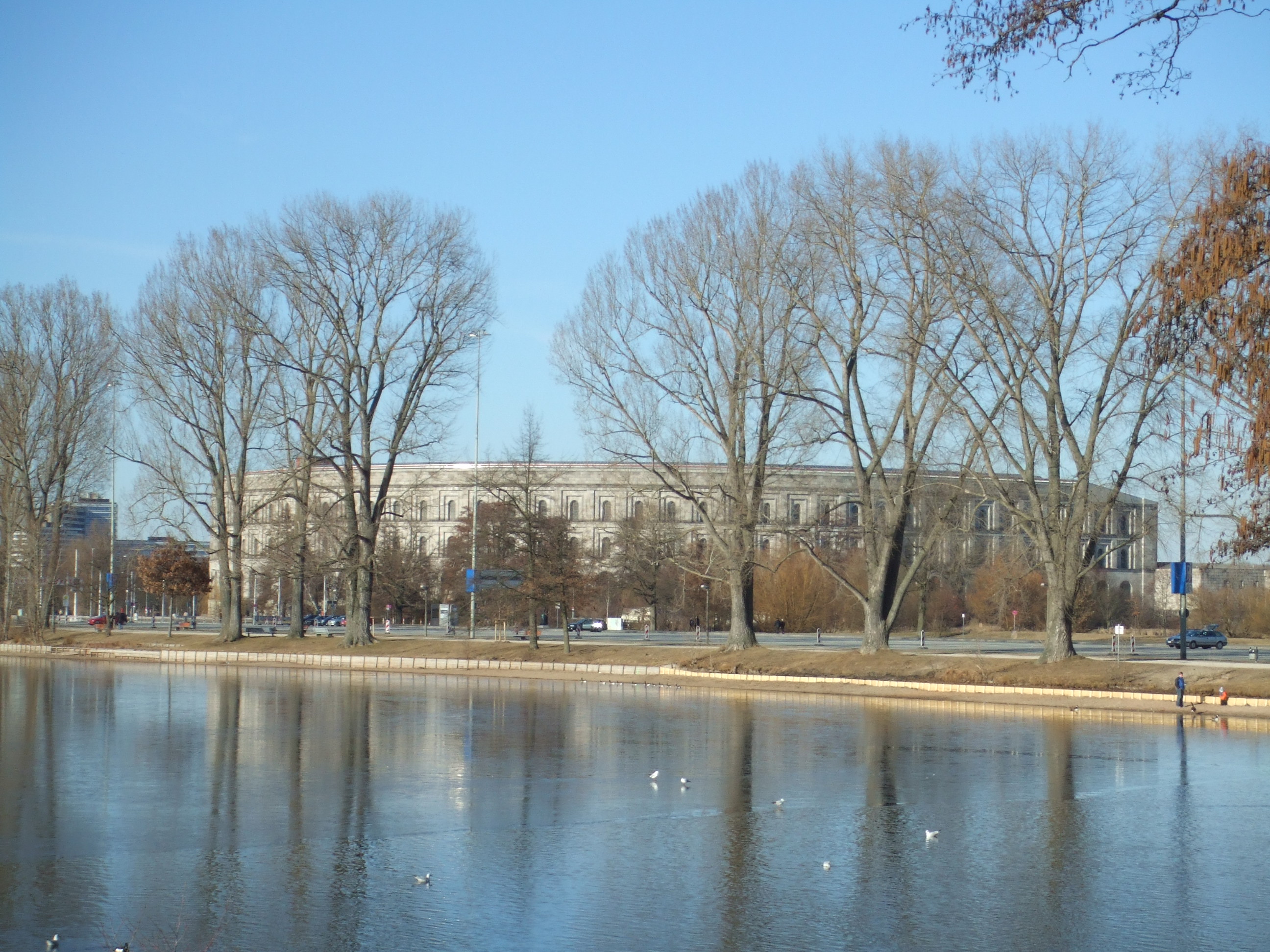 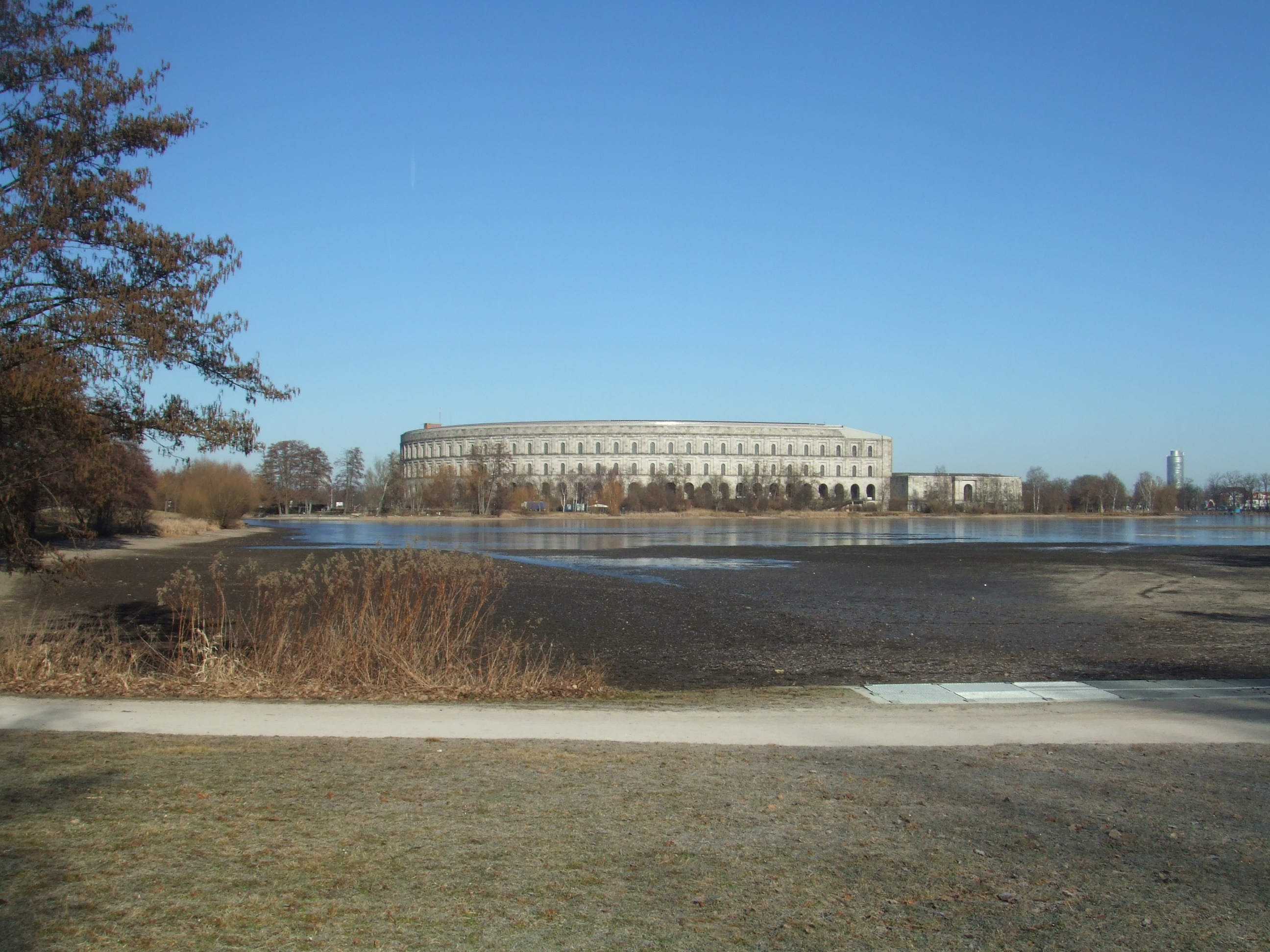