OpenTTD is an open-source clone of the Transport Tycoon series of transport business simulation games. While it’s a lot of fun to play, especially multiplayer, the default gameplay quickly becomes old or stale to experienced players:

This can be solved by changing the Infrastructure Maintenance option (set to false by default) to true. This means any infrastructure (such as rails and rail signals) have a recurring maintenance fee. This heavily penalizes random, long-distance builds, but rewards re-use and efficiency of infrastructure. It’s very easy now to bankrupt yourself even in the late game with this turned on, so builds need to be thought out strategically instead of just built out like a model railway set.

FIRS is a complete industry replacement set that’s been in development for years. The developers have carefully planned out complex economies that make for interesting, dynamic gameplay. For example, you might want to start with a company that specializes in transporting oil products, or metal cargoes. Each of these sub-economies are each individually more complex than the default OpenTTD economy. 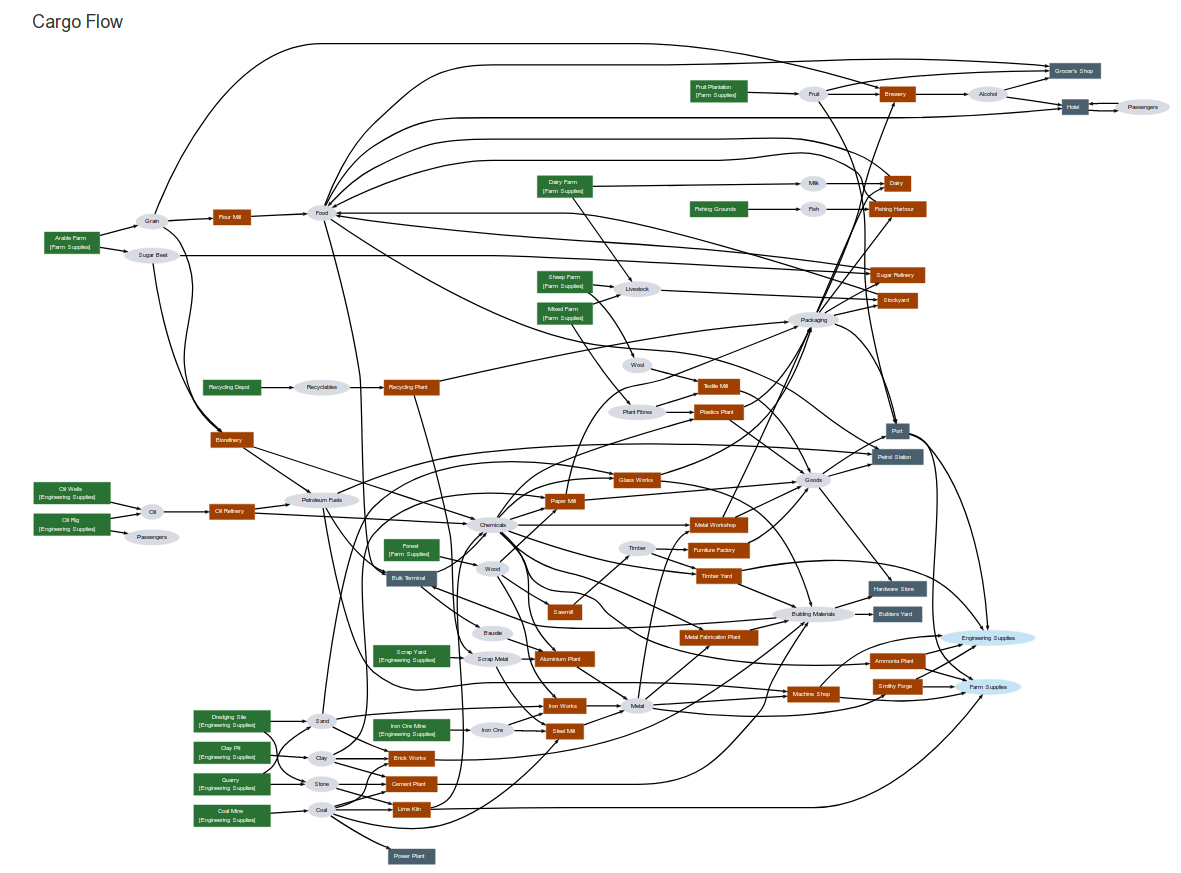 (You should be able to see an enlarged, up to date version of the economy map here, but that link might go stale as this article ages.)

A lot of the economy in FIRS is circular. For example, you can run iron ore from a mine to a steel mill. The mill produces metal, which you can take to a smithy. Then the smithy makes engineering supplies from that metal, which you can run back to the iron ore mine. This increases production at the mine due to the increased efficiency of having engineering supplies on hand. This makes for very interesting and rewarding gameplay and solves the low industry variety problem of stock OpenTTD.

FIRS also allows you to manipulate how industries open or close. Changing “Allow secondary industries to close” to “off” fixes the ‘industries disappear’ problem. Now all industries on the map at generation time will remain there until the end of the game, presenting an interesting puzzle to be solved over time instead of a race against the clock to supply industries before they disappear.

FIRS combined with the Iron Horse train set completely eliminate monorail and maglev vehicles available in stock OpenTTD. This is a good thing. It means that from the start of the game to the end, all of your cargo will run on regular railway tracks, and there’s no need to upgrade to monorail or maglev. The only upgrade you’ll perform the entire game is to electrify your tracks, which can be done in-place without the tedious “destroy and replace” upgrade process necessary in stock OpenTTD.

The types of engines available in Iron Horse has been well thought out by the author, presenting interesting choices throughout the duration of the game.

Typically in the real world passenger rail networks (commuter rail, subways, or LRT’s) are segregated from heavy freight railway networks. There’s no reason why OpenTTD should be any different. These track sets add the ability to construct unique passenger rail networks with distinctly different properties from regular FIRS rail. Since FIRS doesn’t concern itself much with moving passengers around, these sets fit the missing piece of the puzzle very well.

Since FIRS combined with Iron Horse don’t provide monorail or maglev, there’s no need to upgrade your freight network from regular rail (be it steam, electric, or diesel.) Regular, “heavy” rail will remain in use throughout the game from beginning to end as a core part of gameplay, which wasn’t true in stock OpenTTD.

In the early game, simple tram stations stimulate city growth. In the late game, only high speed rail operates at very high speeds (up to 600kph), but since high speed rail can only transport passengers or mail, it can’t be abused like in stock OpenTTD to transport heavy industrial cargoes. This makes for much more interesting gameplay with a great amount of variety. It also eliminates the need to tediously upgrade your freight network from standard rail to maglev or monorail, and creates realistic passenger networks.

With all of these modifications, OpenTTD is transformed into a long-running, complex simulation with high difficulty and strong variation between games. It remains interesting throughout as key milestones are reached. I like to start at the year 1860 to allow for a long time to develop the freight networks:

As of this writing, here are the exact versions of each NewGRF set used. The station sets are cosmetic only, but are great for building unique stations: