The BC pavilion at Expo ’86. Stadium Gate Station can be seen at the far end of the monorail track in the center of the photo. Courtesy of Jerrye and Roy Klotz MD.

The theme of the 1986 World Exposition in Vancouver was Transportation. Vancouver’s state of the art driverless, computer-driven SkyTrain mass transit system had just opened, showcasing the best in Canadian engineering talent. The expo grounds were filled with varying examples of transportation. Japan had its HSST high-speed rail system on display. Gondolas transported expo-goers high above from one podium to the next, giving breathtaking views of the expo grounds. Water ferries carried passengers across False Creek from one area of the expo to the next. The history of world transportation was chronicled at Expo ’86, from the steam engine to modern magnetic propulsion.

Most attractions were built as temporary features, and the Expo ’86 Monorail was no exception. Built as both an exhibit and method to transport expo-goers from one site to the other quickly, the monorail spanned the entire length of the expo grounds. Because of this, the monorail can be seen in the background of many Expo ’86 photos, and was fondly remembered by attendees. After the expo, the monorail was dismantled and sold to the Alton Towers amusement park in England. 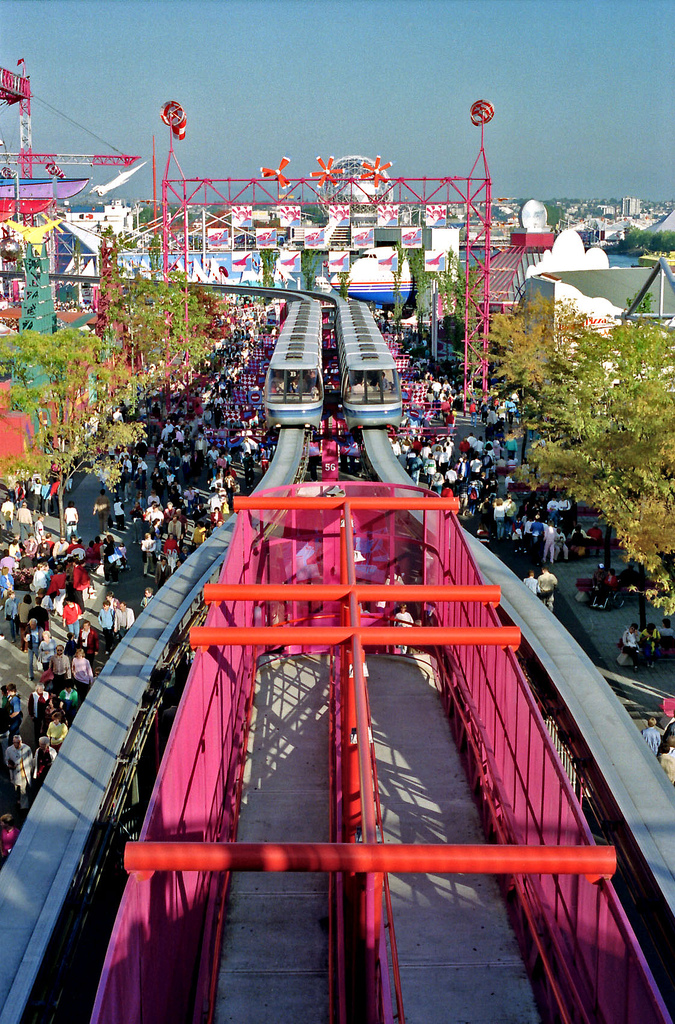 When most people think of abandoned transit stations, they think of New York or London, with their maze of tracks and tunnels going back a hundred years. Most people attending an event or concert in the Plaza of Nations have no clue that an abandoned station is just over their shoulder, footsteps away. 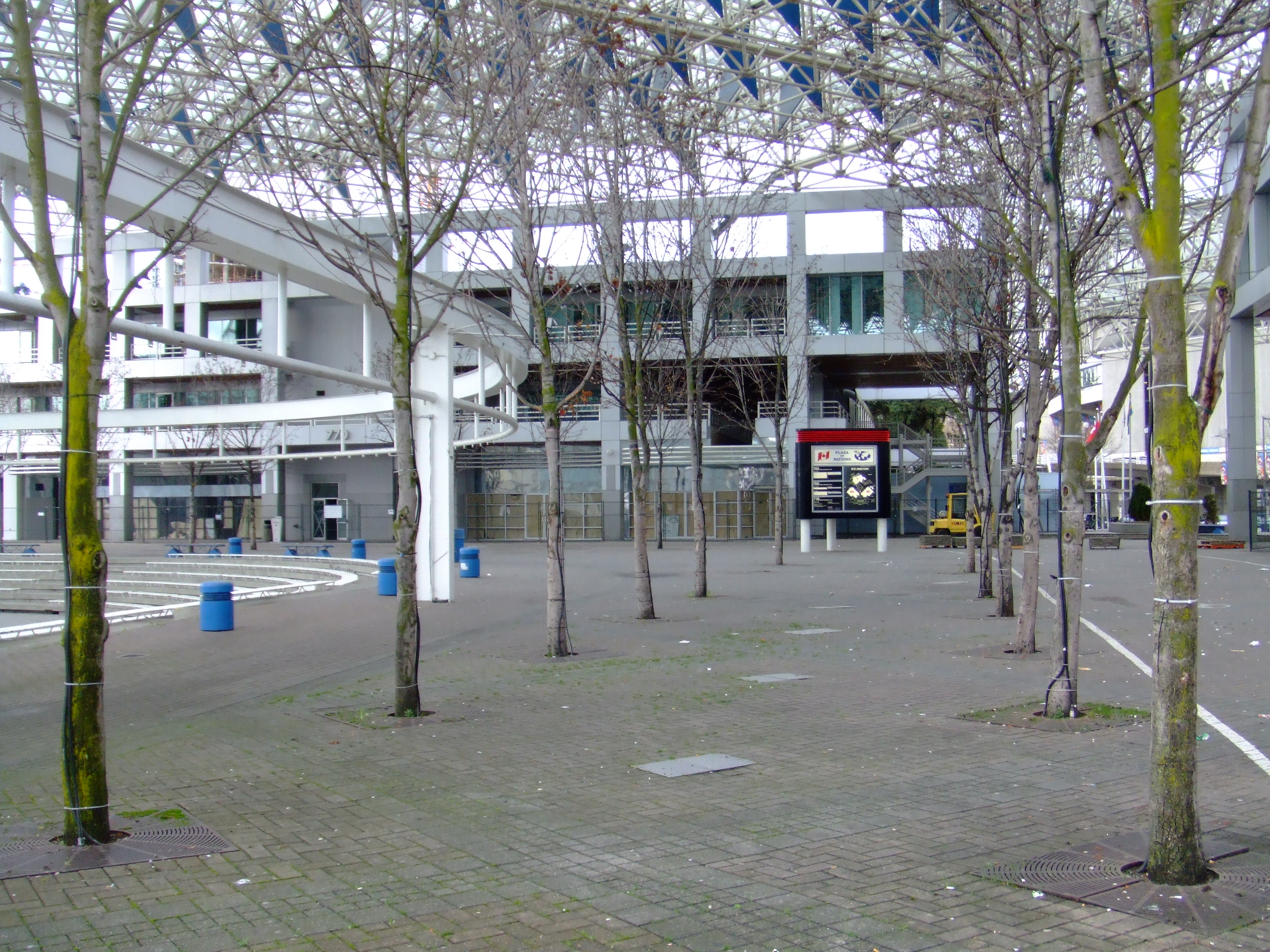 Plaza of Nations, which housed the BC Pavilion, in 2007.

A section of the monorail actually ran through several of the temporary buildings. One trio of temporary buildings, the Plaza of Nations, still stood as it did in 1986, a full twenty years after the expo was over. Few people will remember that Stadium Gate Station was a stop on the monorail route, and actually stopped within the Plaza of Nations building itself.  In fact, rumours circulated the Vancouver Transit mailing list for some time about an ‘abandoned’ monorail station, so I decided to go for a walk around the Plaza of Nations to find it. In the photo to the left above, you can see the last remnants of the monorail track, held up by metalic, white pillars as it curves around.

Finding the station itself proved to be a bit of a challenge. I walked around all three buildings numerous times before spotting the telltale ‘U’ shape of a guideway where the rail would have gone. You can clearly see this, on the second floor of the building in the picture to the right. Gaining access was a simple matter of climing up a set of stairs (used as exit stairs while the station was active) that was only blocked off by a chain. As you can see from the photo, there is equipment all around, preparing for the building demolition. 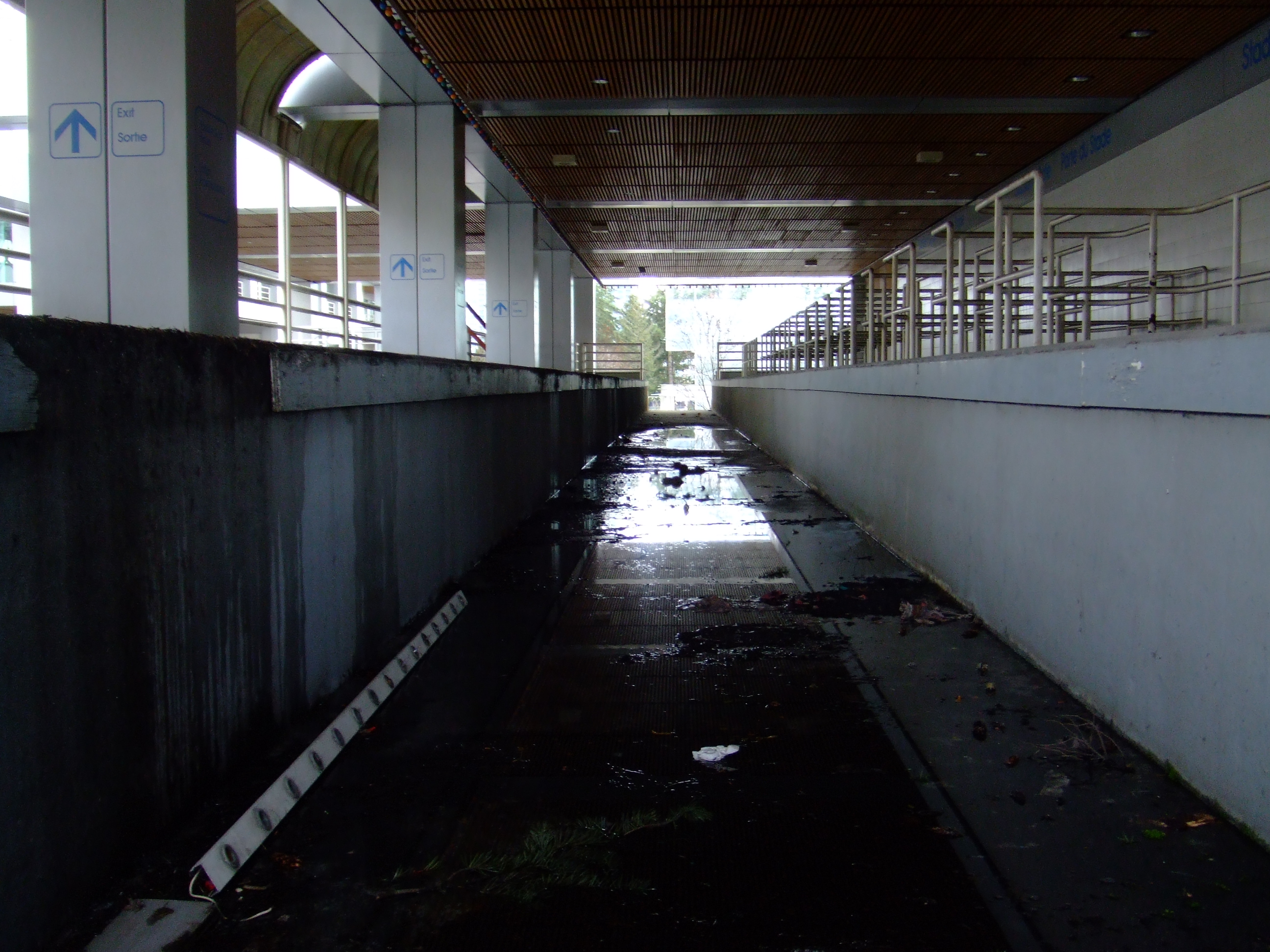 Stepping into the station is like stepping back in time. It is amazingly free of graffiti and vandalism, thanks to its inconspicuous location. In fact, with a little cleanup and restoration, the station could be ready to resume full service the next day.

As you can see from the photo above, the station is surprisingly intact. The wooden slats along the roof are all in pristine condition, the station signs in excellent shape. The metal bars guide passengers to the individual train doors. Even the lights and speakers are still all intact. All that’s missing is the one solid rail down the middle of the guideway, and you’d have a perfectly functional station.

The exit markings are still in perfect condition, used to guide passengers out of the station. We get a good look down the center of the empty guideway. You can still see most of the intact multi-colored lights where the wooden slats end on the roof. 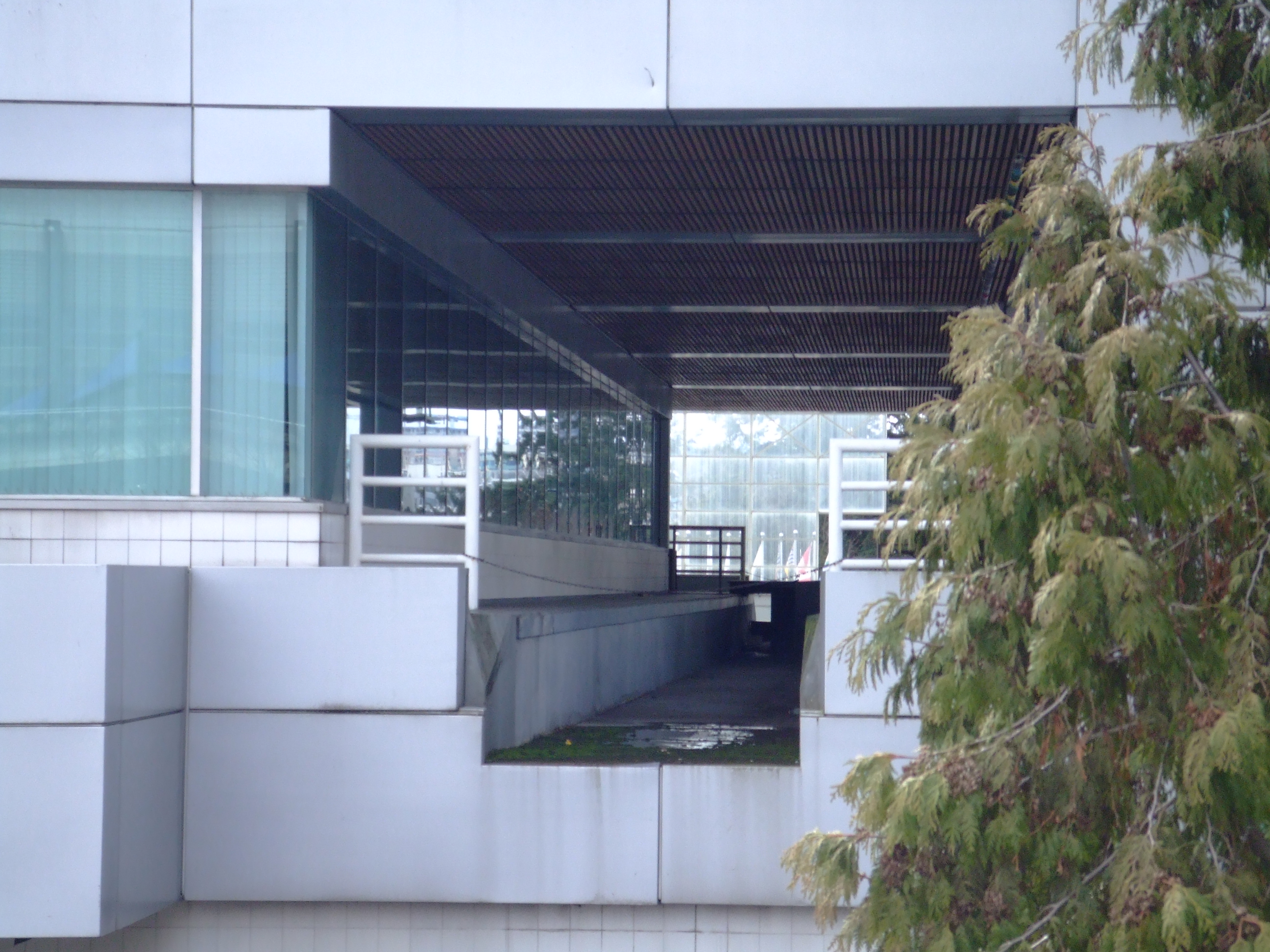 Unfortunately, this piece of history is now gone – it’s been demolished. The Plaza of Nations, which housed Stadium Gate Station, was originally built as a temporary structure. It was supposed to be destroyed immediately after Expo ’86, along with the rest of the temporary structures. However, the Government of BC saw new possibilities in the use of the Plaza of Nations, so it (and Stadium Gate Station along with it) stood for over twenty years after the expo. Now, the only remaining remnant of the Expo ’86 Monorail is a short section where it passed through the opposite building. 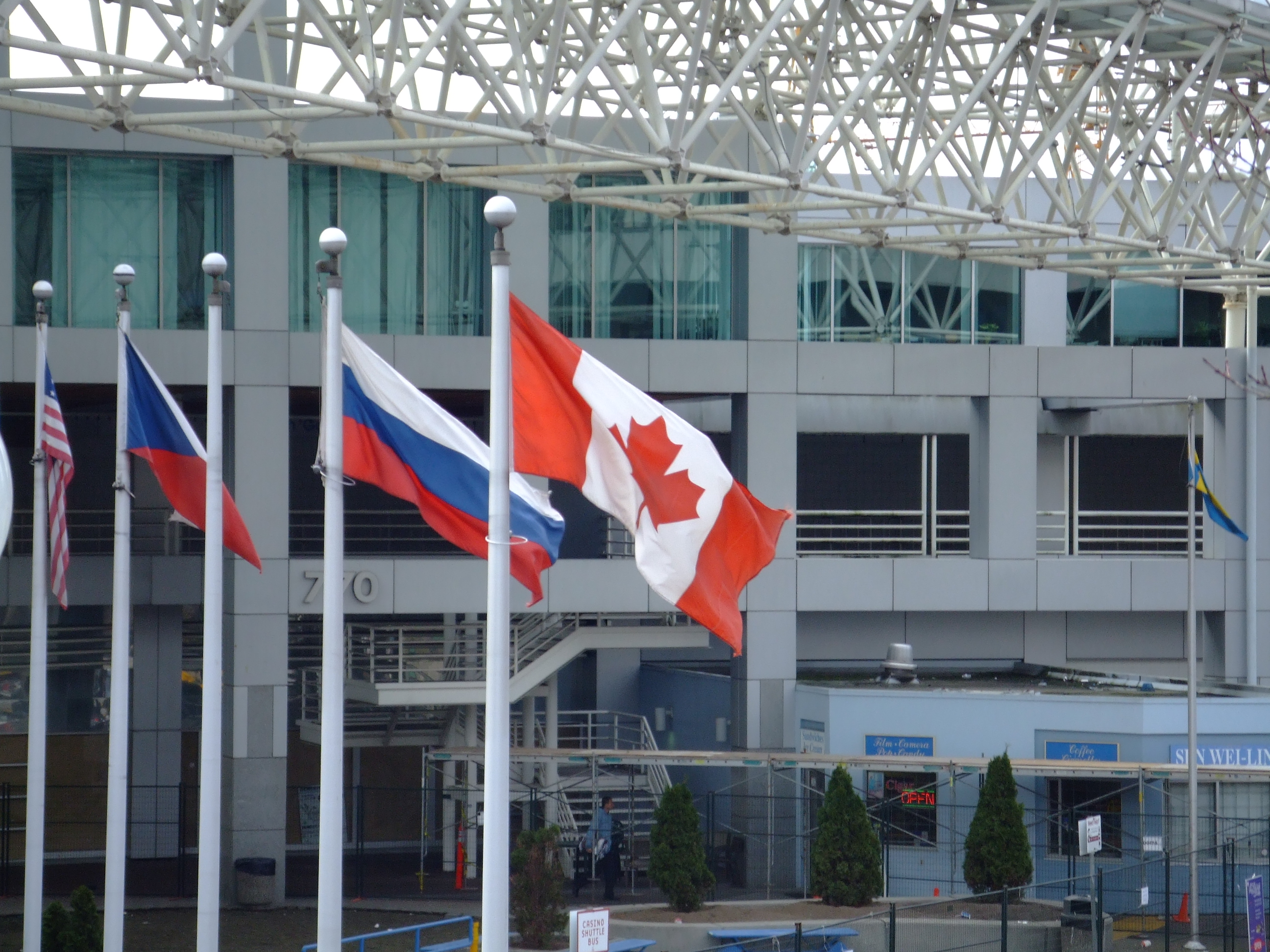