Let’s be clear. From a film critique standpoint, there’s nothing good about The Wizard. I’m not going to rehash the variety of film reviews out there, but I’m not quite sure how the script got approved (either by the film execs or by Nintendo.) How did anyone think writing a script about a bunch of kids gambling and hitch-hiking across the country was a good idea?

When this film premiered, I was just a kid myself, and I was completely blind to how terrible this film was. All I could see were video games, and the liberating freedom of travel. Now, as an adult, of course I need to indulge in my childish fantasies to travel to those same places the kids in the film did.

This guide will be focusing on the filming locations in the area of Reno, Nevada. The majority of the film was shot in the area. However, a minority of scenes were not: This is the “Twin Peaks Motel”, one of the very few filming location that nobody’s been able to find. The phone booth does show a “Nevada Bell” sign, but the film makers have masqueraded locations in California as Nevada before. For example, these scenes filmed at Agua Dulce Airpark, a favourite Hollywood filming location that was also used in MacGuyver: 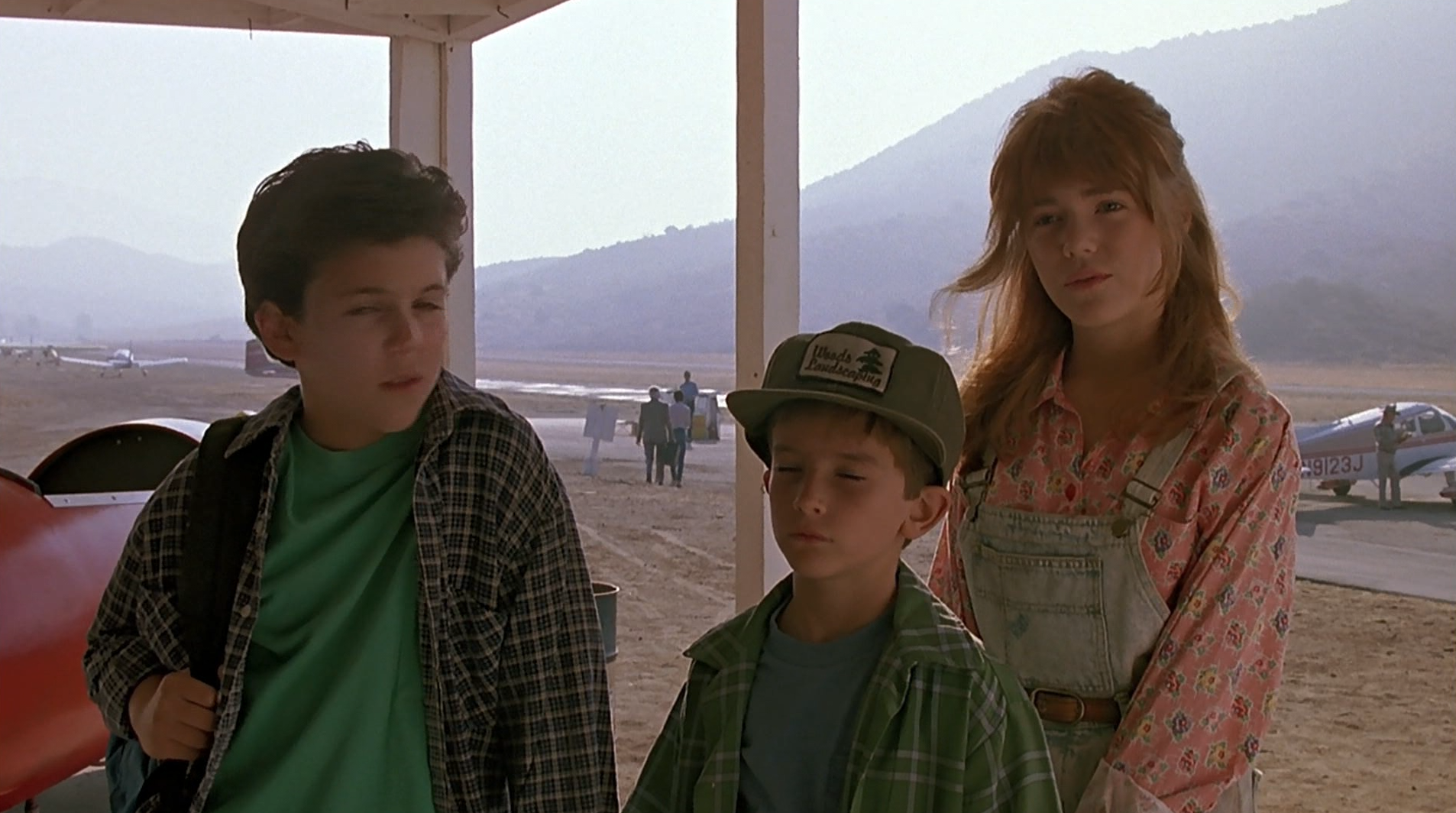 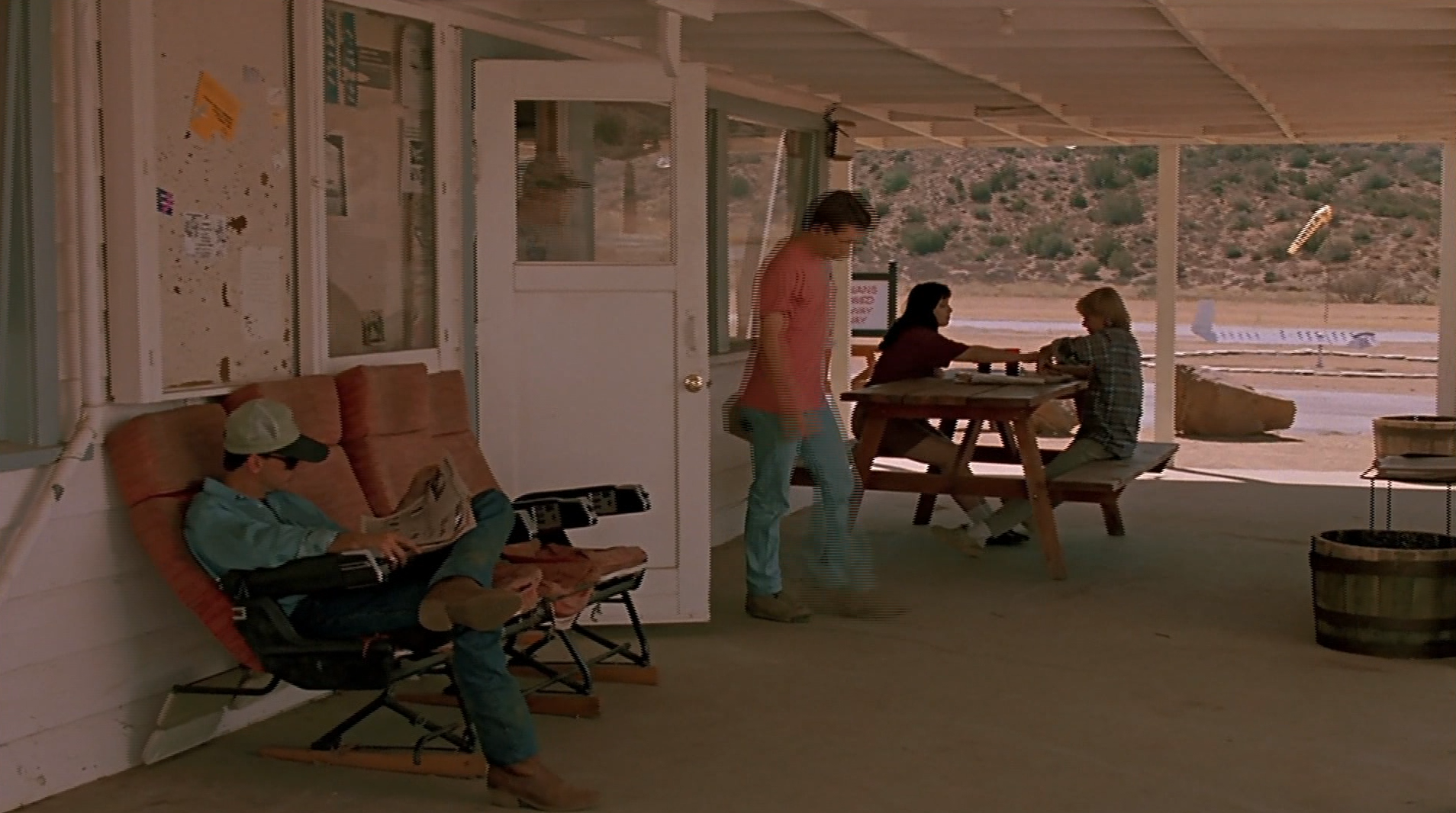 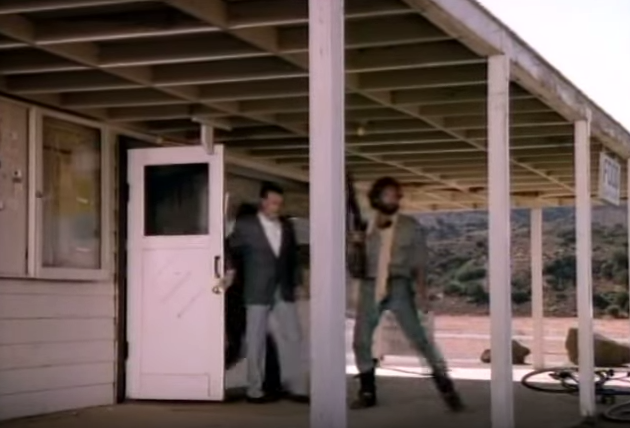 Also worth mentioning are the scenes filmed at Universal City and Cabazon in California. These are popular tourist destinations that speak for themselves.

The Biggest Little City in the World⌗

The best and most obvious place to stage any tour of the remainder of The Wizard filming locations is Reno. Hotel rooms are plentiful and cheap, it itself was a filming location, it has a major commercial airport with on-site rental cars, and the filming locations make a circle that start and end there. Staying in downtown Reno will let you see how the strip along Virginia Street near the “Biggest Little City” sign has changed and evolved since The Wizard was filmed.

The Peppermill Casino, south of downtown Reno, was used as a filming location during the “training montage” scenes where Haley sits poolside while Corey relays messages to Jimmy from Nintendo. However, the Peppermill has been heavily renovated since then, so it’s now unrecognizable compared to what was shot for the film.

This guide will be following a clockwise direction starting in Reno. Note that this is not the chronological order of scenes, I tried to lay this out in a way to be easy to drive from one point to another.

Total round trip, without accounting for “stop and look” time is about 6.5 hours. Adding 15 minutes per stop (there are ten stops total) brings this up to about 9 hours, so this is definitely a long tour that will take an entire day to complete! Please take the time to study the route carefully until you understand it all on your own. In winter, some of these routes might be dangerous or impassable, especially around Lake Tahoe. 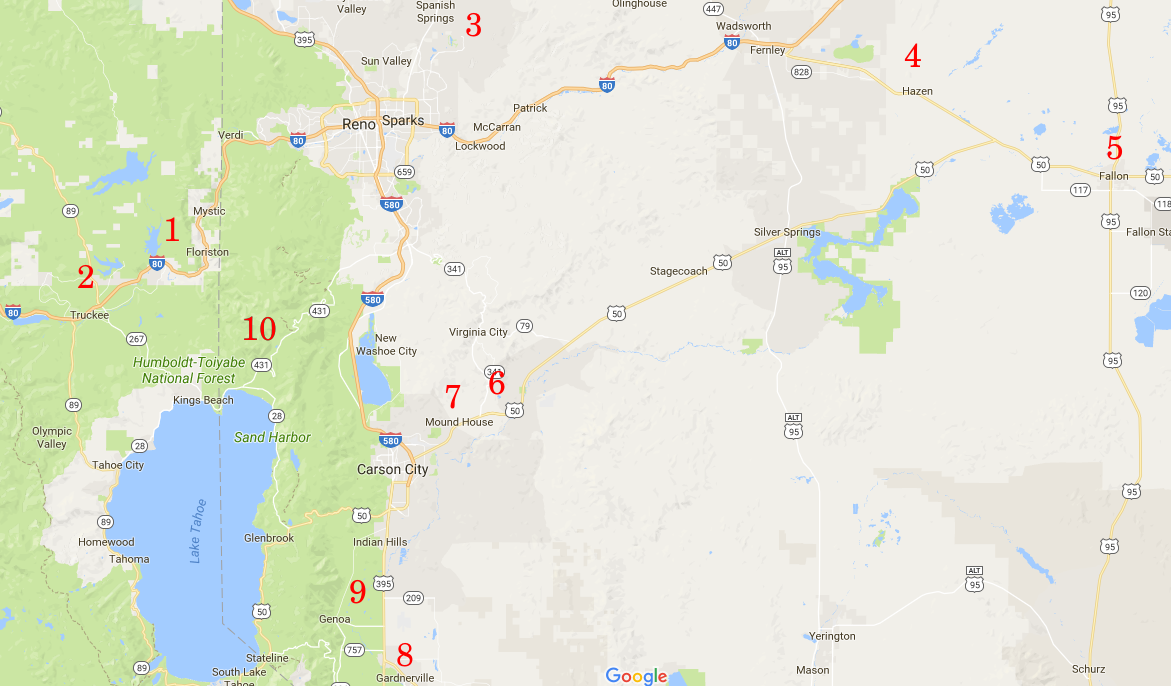 Take the I-80 west from Reno across the California border until you reach Exit 194 marked for “Hirschdale Road”. If you look at the above picture closely, you’ll see the company name clearly on the banner near the top of the frame. Compare the picture to your location and you should be able to find the exact spot it was filmed.

The story goes that Hirschdale Auto Wrecking was forced to close and move away from the area due to environmental concerns.

From here go back the way you came along Hirschdale Road, until you go under the I-80 overpass. Pull over and look behind you – this is the exact spot where the kids were filmed walking under the overpass, towards Hirschdale Auto Wreckers, to spend the night in the wrecked truck cab.

Continue along I-80 west until you reach Truckee. It’s a town that’s well signposted and easy to find. Downtown Truckee is where the “in the shorts” scene was filmed, as well as the brief part of the “Send Me An Angel” montage where the kids were sitting outside a shop holding a “Reno or Bust” sign.

Take the I-80 eastbound back to Reno, and turn north onto Nevada Highway 445 (Exit 18). This is a long drive through some picturesque Nevada high desert. You’ll eventually connect with Nevada Highway 446, turn right (eastbound) here and enjoy the view of Pyramid Lake to your left. Drive until you reach the rest stop at the end of the lake. Not too far further east from here you should be able to find the tree on the right-hand side of the highway where the film’s opening sequences were filmed.

Here’s the tree from the film: 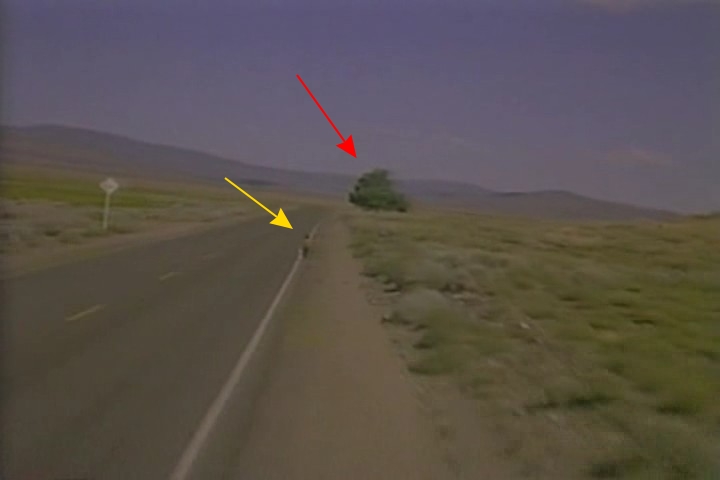 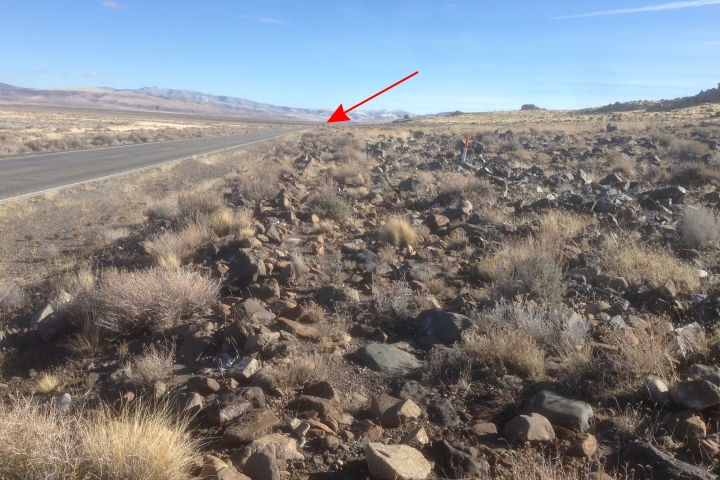 The image above was taken in 2016 at this location near Pyramid Lake – you can clearly see the tree in Google’s satellite view. Google provides a street view as well. You can compare the landscape and see that it’s an exact match to the shot from the film.

Here’s an “up close” view of the tree in 2016 without its leaves in winter: 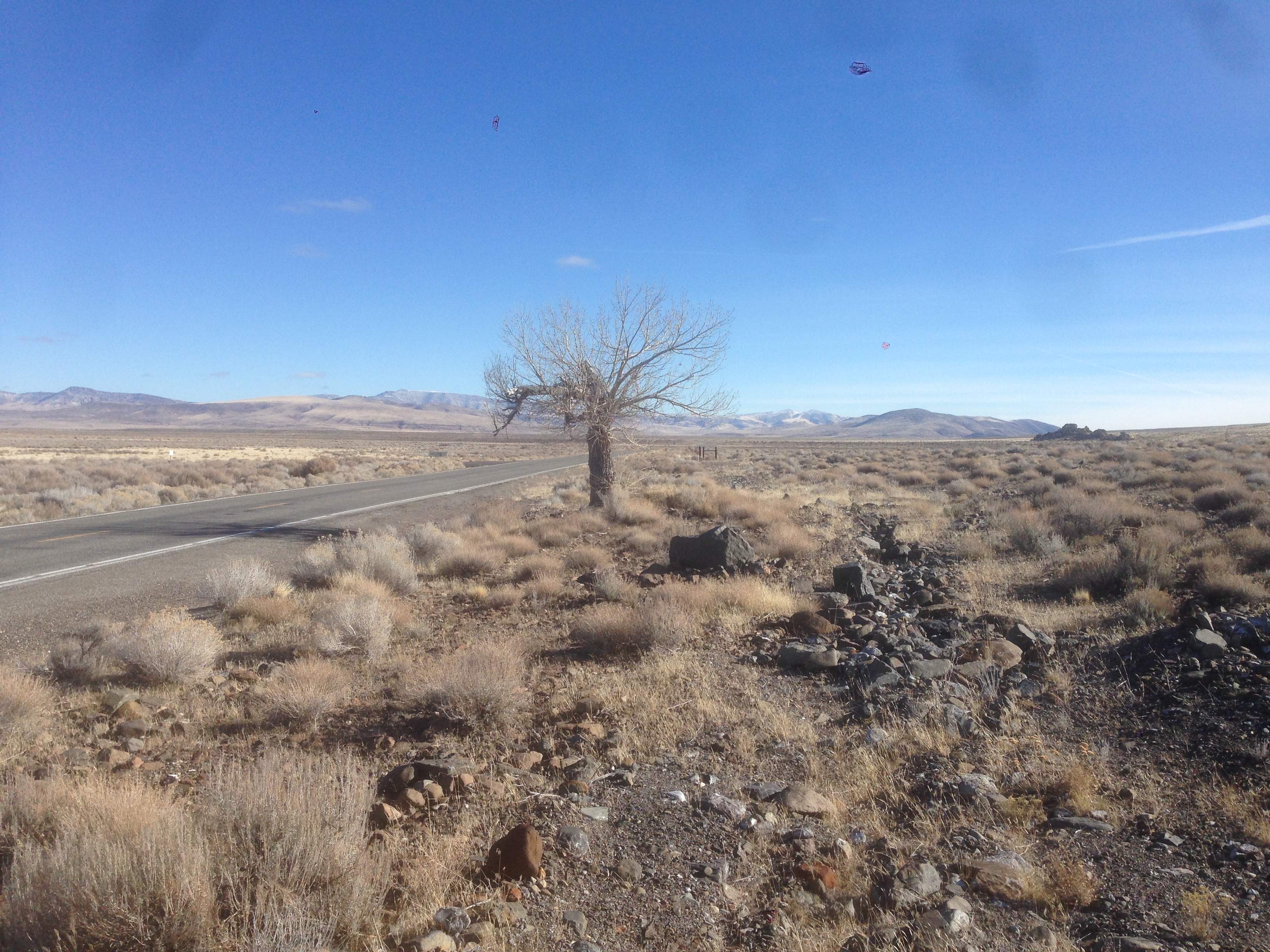 While researching all of this, I noticed that the opening sequence with Jimmy is actually made of two different filming locations. Taking a look at the geography around the tree above, and then comparing it to this cut of Jimmy walking along the highway: 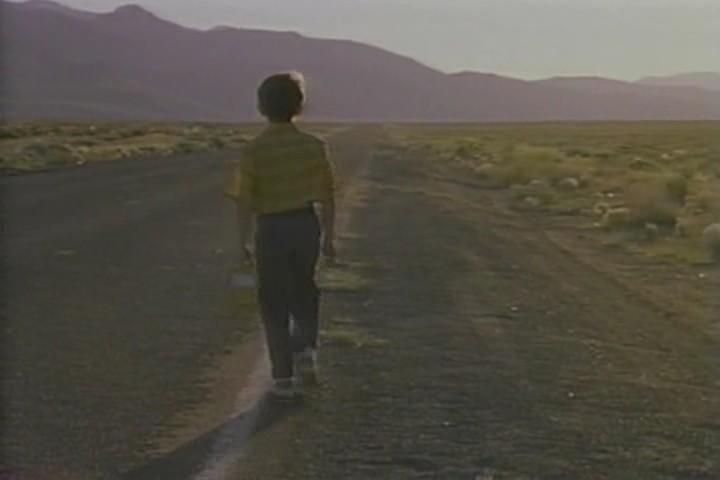 Notice how the mountains in the background changed? There are also other inconsistencies in the opening sequence. Consider that the tree appears just to the left of the frame (but in front of the vehicle) where the officer stops Jimmy: Then the tree is nowhere in sight when the vehicle pulls away: 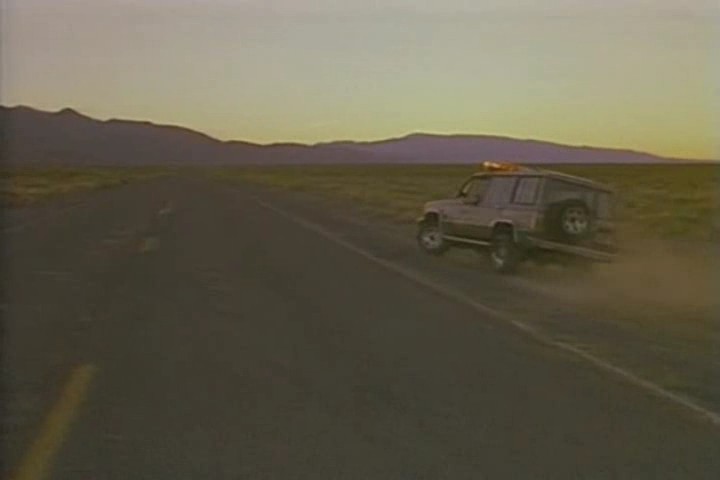 Even the colors of the shots dramatically shift from one cut to the next. The shots filmed near the tree were taken during the day, but the other shots taken at the unknown location during sunset. The slope to the right of the shot mysteriously disappears with the tree as well. Once you reach Hazen, you’ll need to turn left to come back around to Hazen Market. Notice how in the film, US50 was a simple two-lane highway, but today, has been upgraded to four lanes. This is a big part of why, as of this writing, Hazen Market is permanently closed. The barrier separating westbound from eastbound traffic caused visits to this iconic market to drop significantly.

As you proceed east, US50 Alternate will meet up with US50 proper. Continue east until you reach 7227 Reno Highway just outside of Fallon. At the time of this writing, it was easy to spot thanks to the large “for sale” sign there: 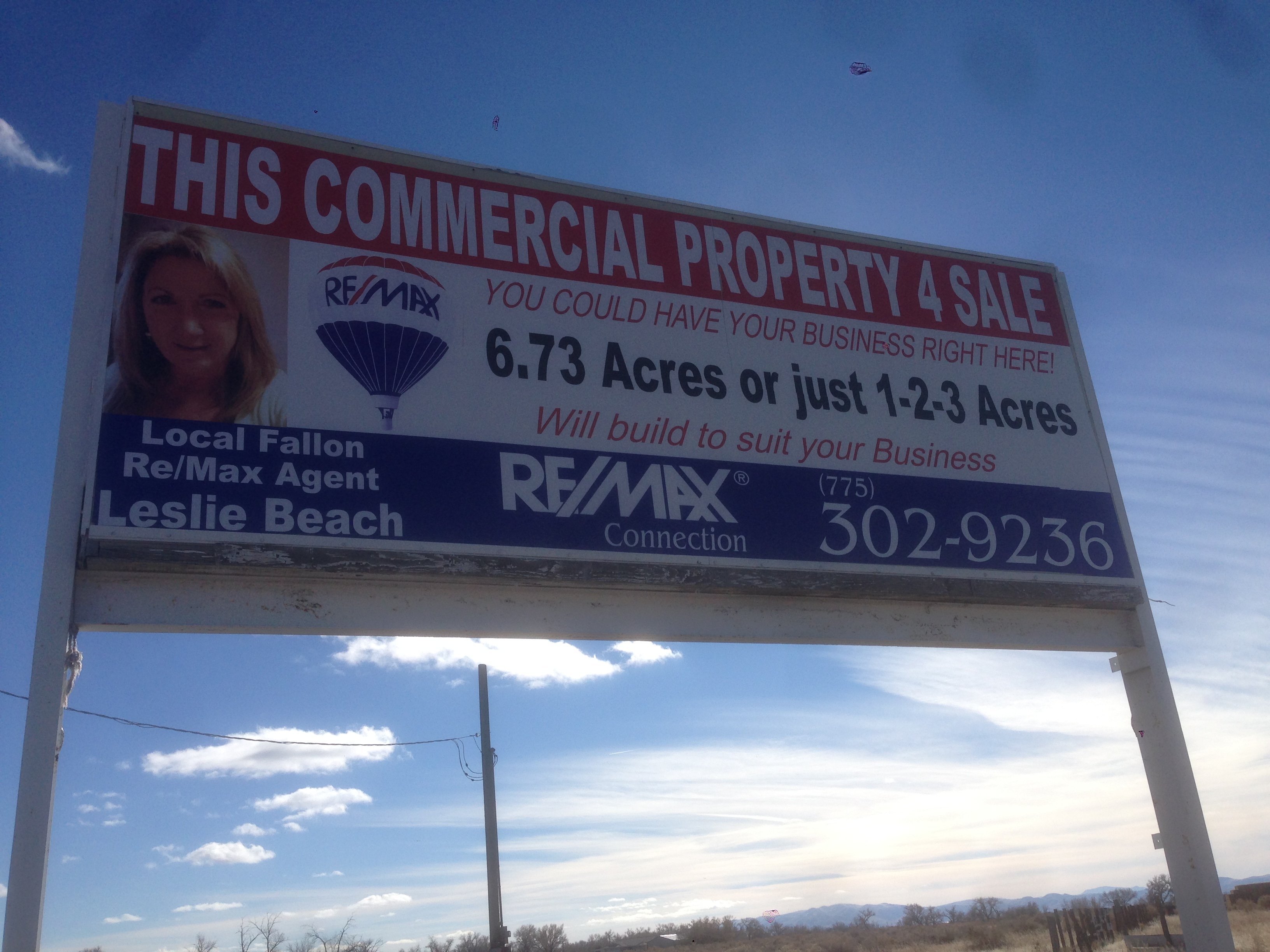 This is the location of the old Star-Vu Drive-In Theatre. It’s mostly a barren field now, but the theater concession/projection building was still standing at the time of this writing, complete with old projectors inside. Here’s where Haley, Corey, and Jimmy talked after discovering the contents of Jimmy’s lunchbox: 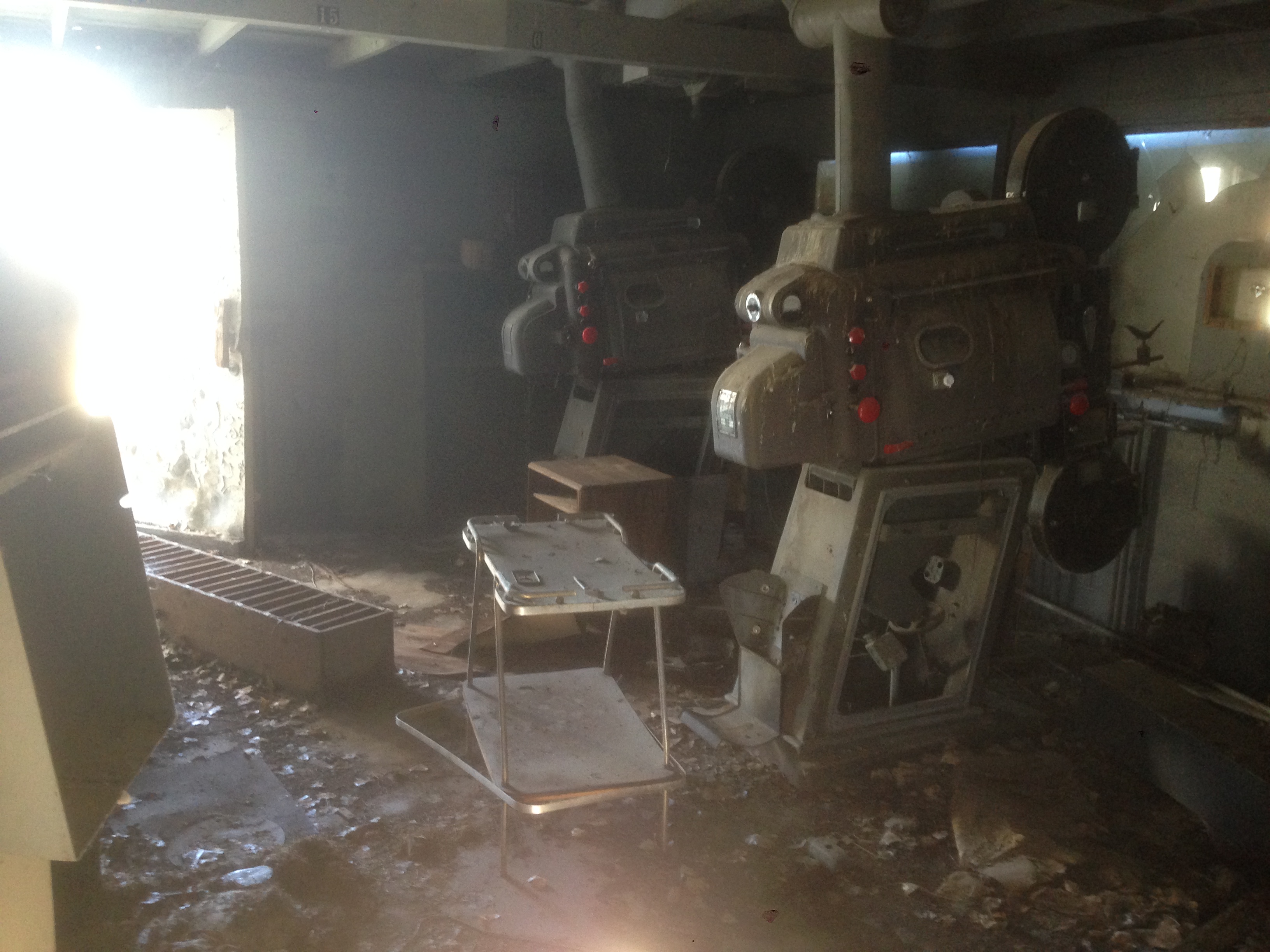 Turn around on the US50 back westbound until it intersects with US50 Alternate (the “Reno Highway”). Turn southwest towards Carson City to continue along US50 proper (the “Lincoln Highway”). Once in Dayton, turn right onto Main Street from US50, and you should be in the heart of historic downtown Dayton. The Fox Hotel is easily recognizable on the left-hand side. 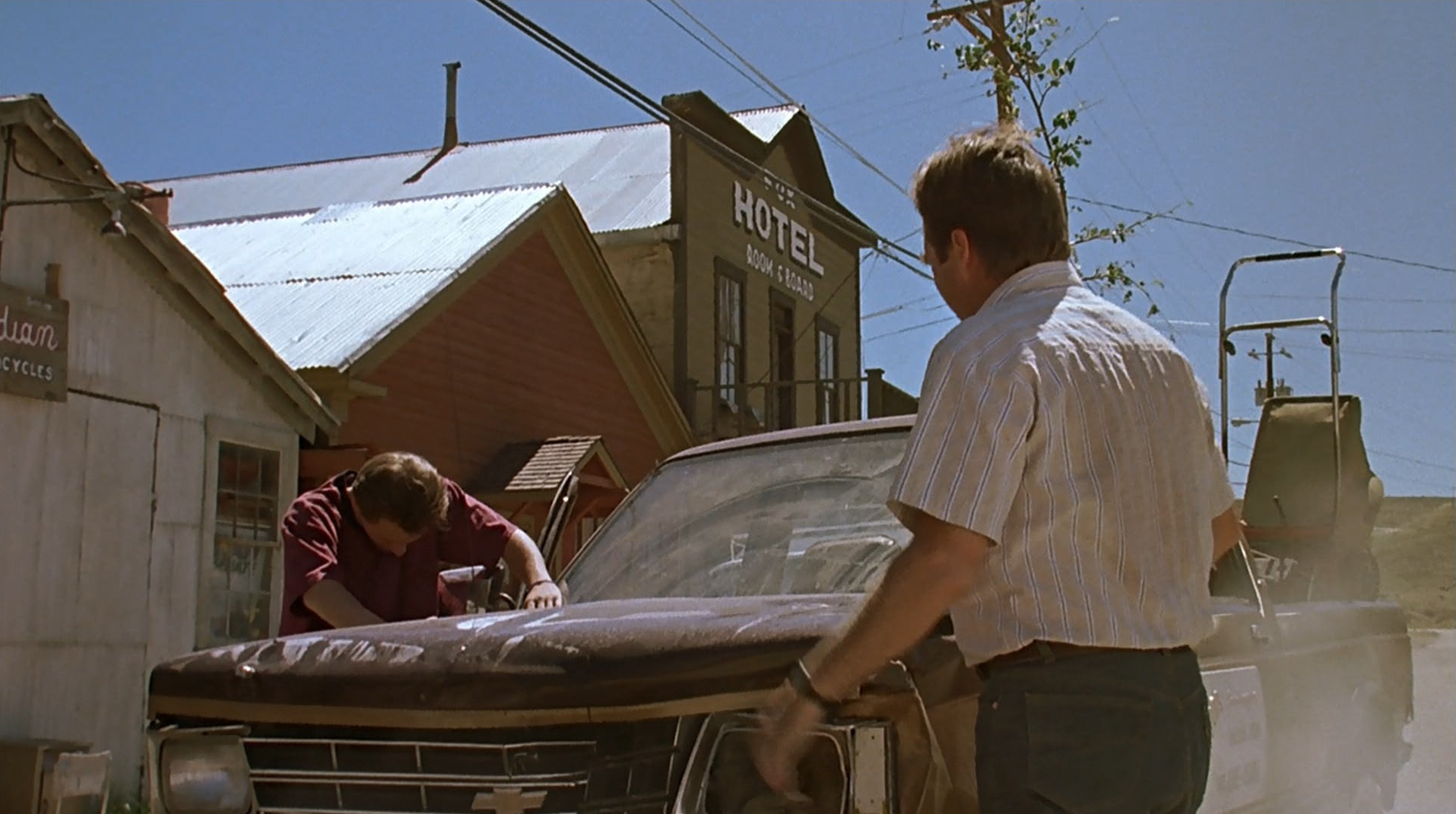 Not far west from Dayton along US50 is Mound House. Specifically, stop at 10087 Highway 50 East, and if you’re lucky, this “black widow” from the “Send Me An Angel” montage might still be there: 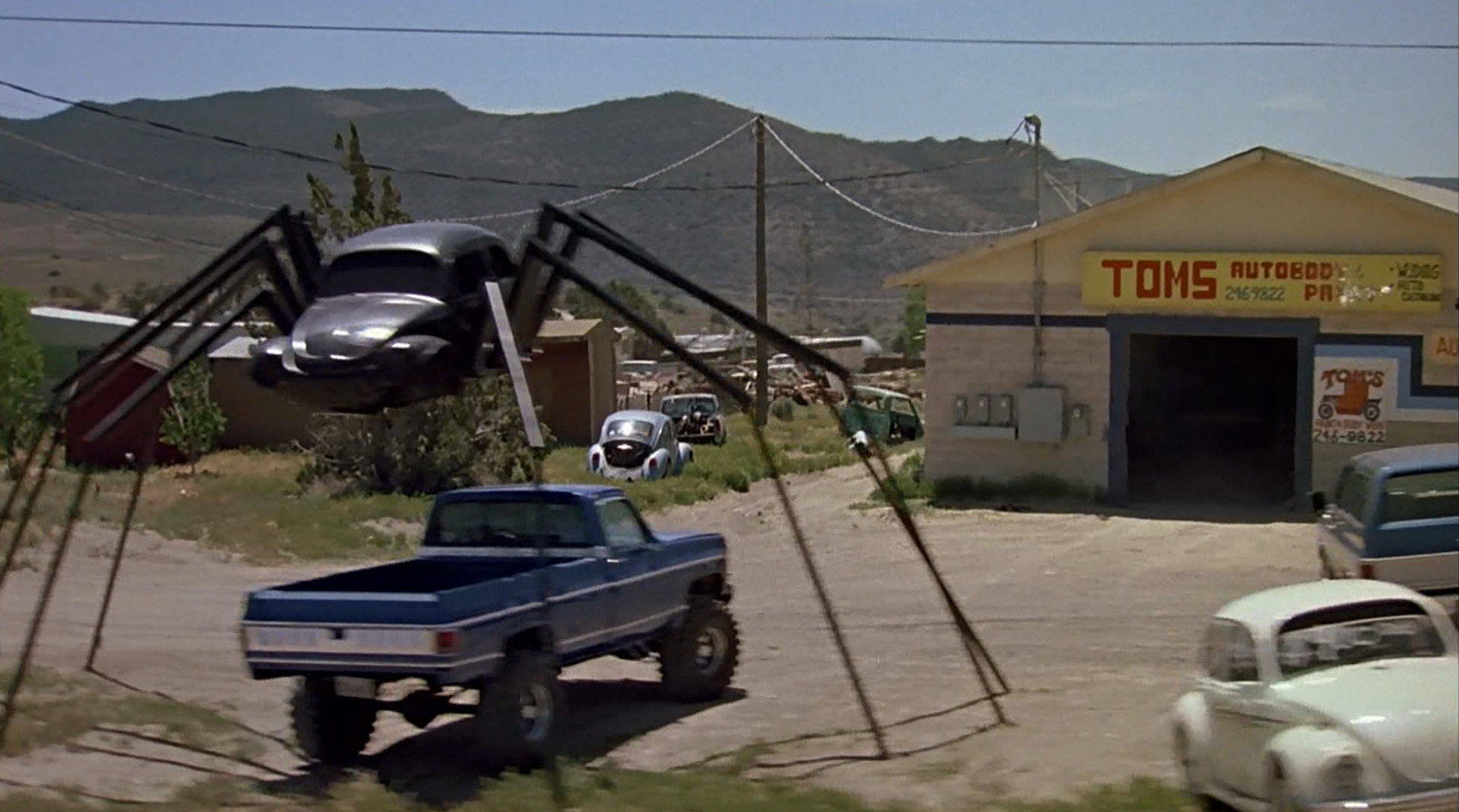 In Gardnerville, turn left off of US395 onto Eddy Street. At the end of the street you’ll find Reid Mansion, or what was known as the “Greenriver Institution” in the film, where Corey absconded with Jimmy.

Take US395 back north until you reach Minden and turn left onto Esmeralda Avenue. This strip was used to film a variety of shots. For example, the bus station where Corey and Jimmy met Haley for the first time is now a casino: 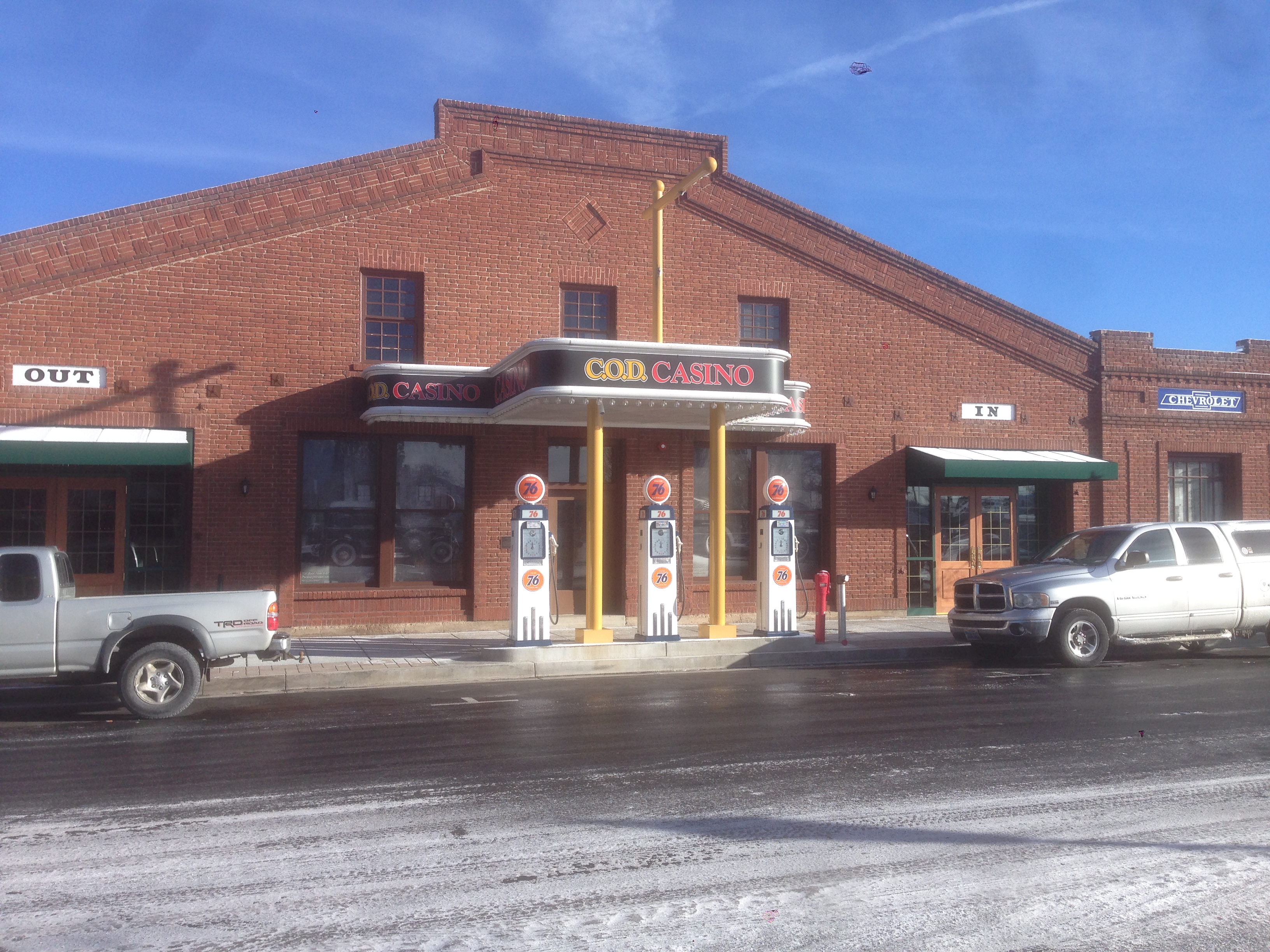 Across the street, the Minden Inn was converted to a restaurant specifically for the film. The scene where Putnam pops the tires of Sam’s truck was filmed here, too.

Take the US395 north and turn left onto Genoa Lane, and about halfway between US395 and Genoa, you should find a view like this: This is where Haley, Corey, and Jimmy were robbed of a few bucks by a group of cow farmers.

Take US395 back north until it intersects with US50 again, but this time, turn left to go westbound towards Lake Tahoe. Once near the lake, turn right to take Nevada Highway 20 north. It follows the shore of Lake Tahoe a little and takes you through some picturesque vacation villages before intersecting with Nevada Highway 431. Turn right there to go eastbound and climb back up into the mountains. You won’t have to go far before finding this iconic outlook on the right-hand side: Be sure to take the time to celebrate the end of the tour by playing “Send Me An Angel” as loud as you can while you drive along highway 431 back to Reno!