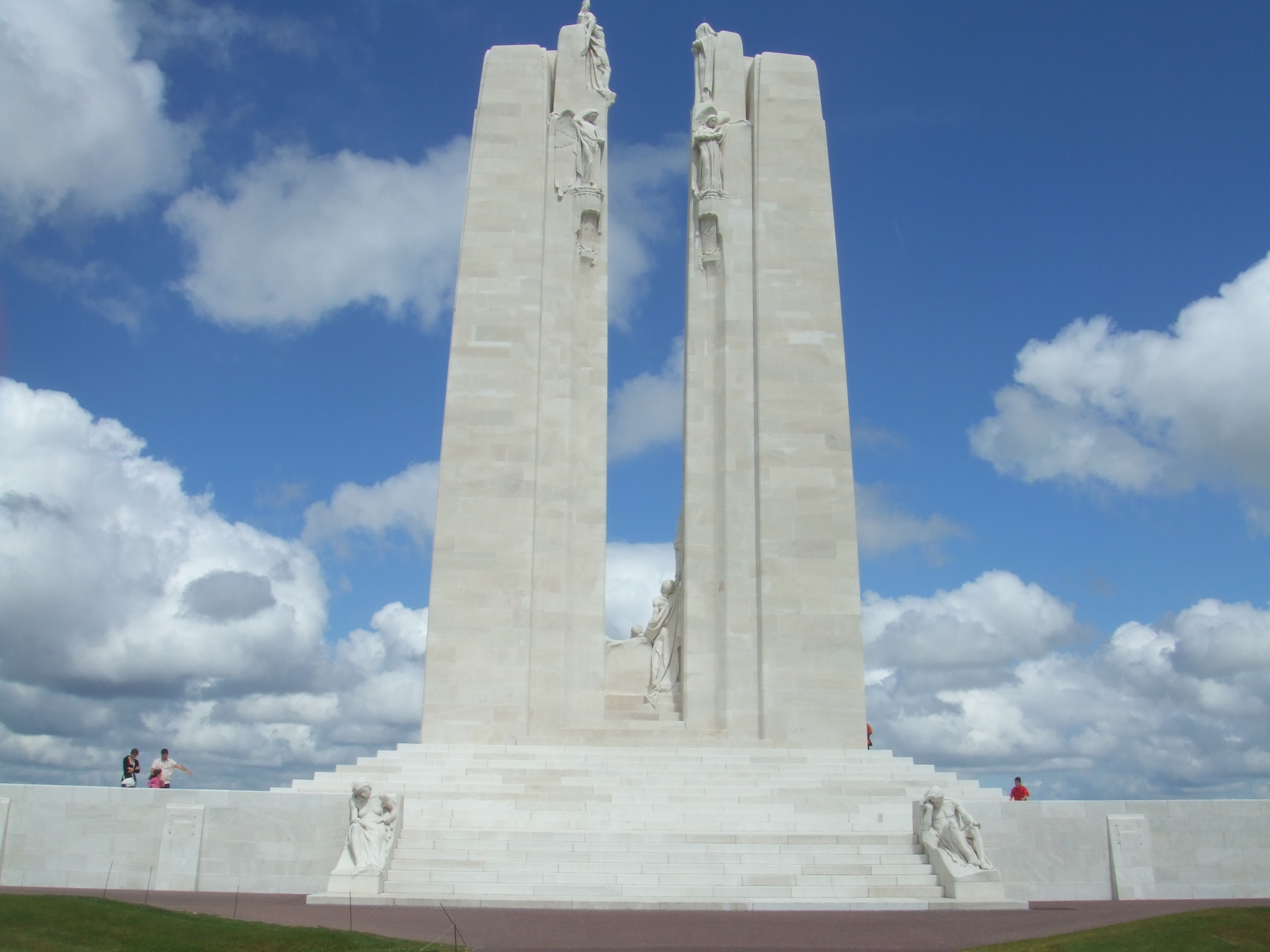 The Battle of Vimy Ridge is the most important battle in all of Canadian history. It was also a very important strategic win by the allied forces in World War I, where Canadians and other Commonwealth troops smashed through hardened German trenches that had been solidified for years thanks to the war of attrition. The battle is taught to every Canadian child in school, and represents a turning point in Canada’s independence from Great Britain.

Some people like to say that the United States paid for its independence with blood and that Canada won its independence through peace. This isn’t entirely true. It was the Battle of Vimy Ridge that caused the British to look at Canadians in an entirely new light. For it was a British General that said of the Battle of Vimy Ridge, “In those few minutes, I witnessed the birth of a nation.”

After the war, France gave a piece of land at Vimy Ridge to the People of Canada in perpetuity, as a show of gratitude. The Government of Canada then built a monument on this soil, now technically Canadian soil, a testament to the strength and resilliance of Canadian troops that carries on to this very day. The monument at Vimy Ridge is the largest Canadian monument anywhere in the world. One could consider it our very own Statue of Liberty; an irony given that the Statue of Liberty was also given as a gift to the United States from France in celebration their very own independence.

It was always a dream of mine to visit Vimy Ridge, to pay my respects to what is the most important Canadian monument anywhere in the world. But I never thought that I’d have the opportunity. Being in Germany for a few months on company business allowed me to make a quick weekend flight over to Paris from Munich. That’s where my trip started, in the Paris Gare du Nord, or Paris North Train Station. I took a TGV train, which flew along the tracks at speeds upwards of 200 kilometers per hour, to Lens, just north-east of the memorial. 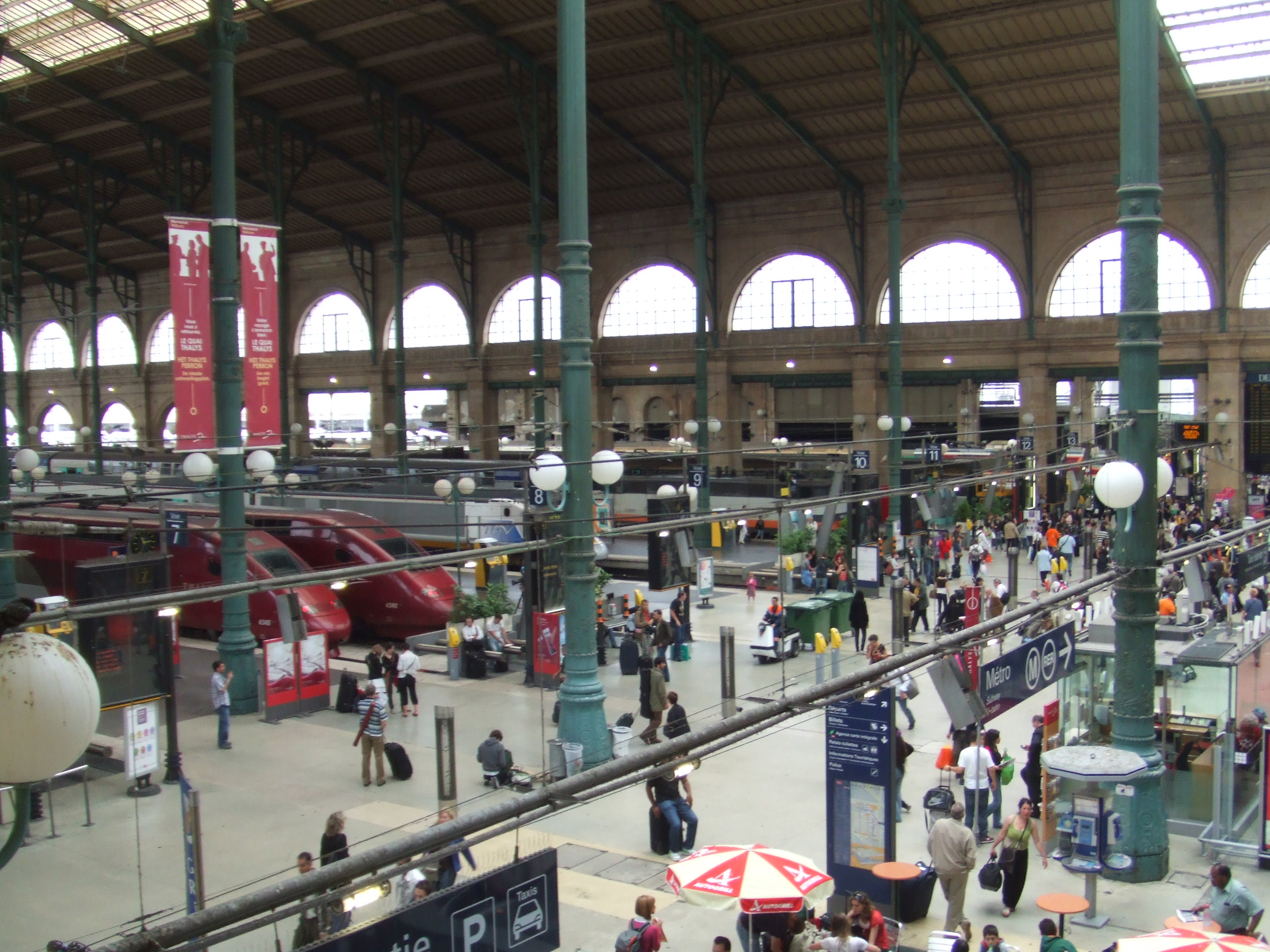 From Lens, I caught a bus to the small village of Vimy, where the ridge that bore its name stood out prominently against the skyline. On the western edge of the ridge, the monument was clearly visible. Poking up above the trees, it viewable for miles around. Indeed, the locals are more than aware of the monument, which is also lit by bright floodlights at night. 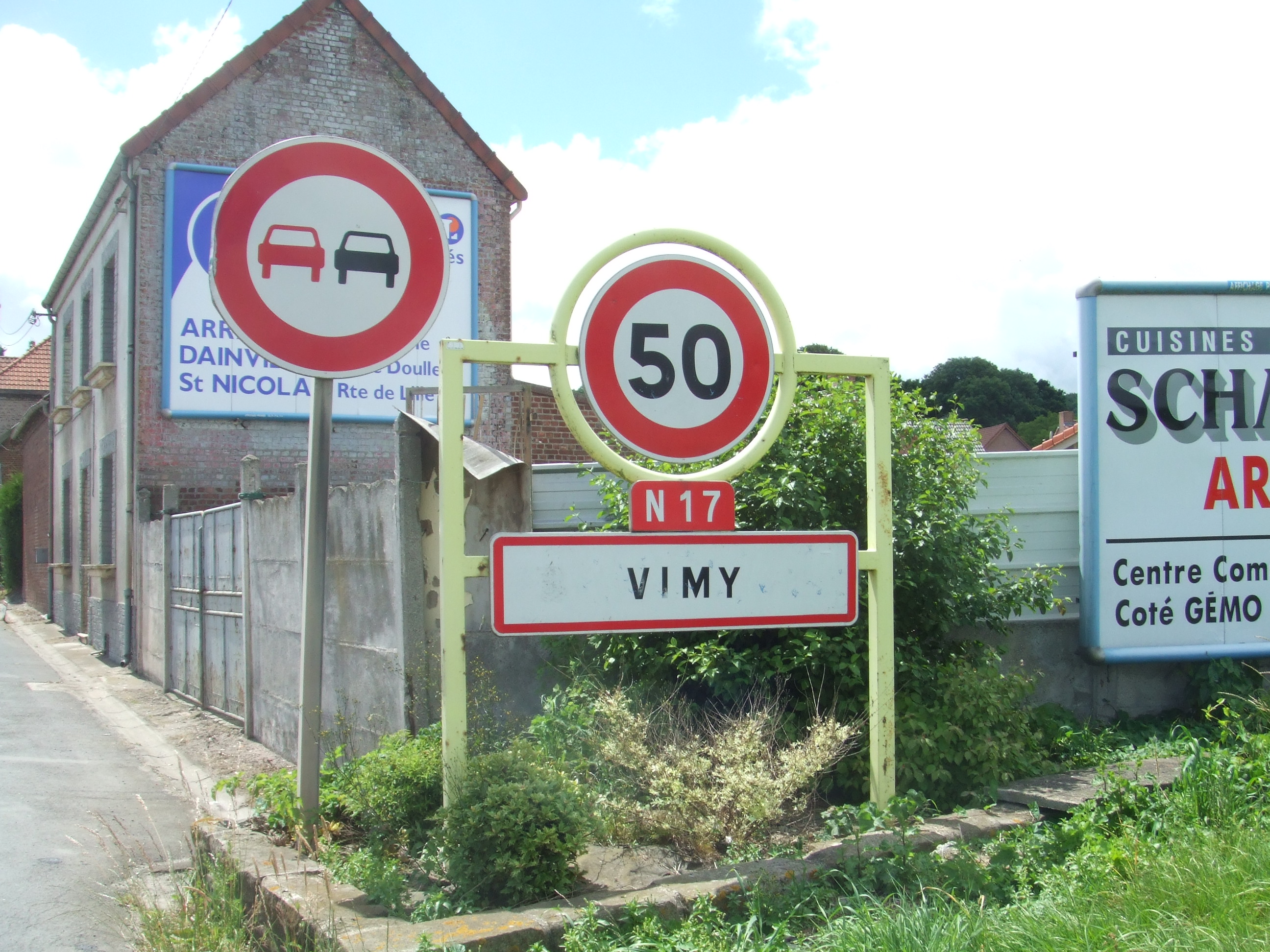 The monument is a fair distance from the village of Vimy itself. There is a road that comes up the ridge from the south side, but I decided to approach it from the north. This let me meander through a few kilometers of pristine French countryside, where I had to jump over fences and cross farmer’s fields to make my way to the monument. It was difficult to imagine something so pure being at one time scarred with mud and shell craters. During World War I, my approach would have come from the German side. 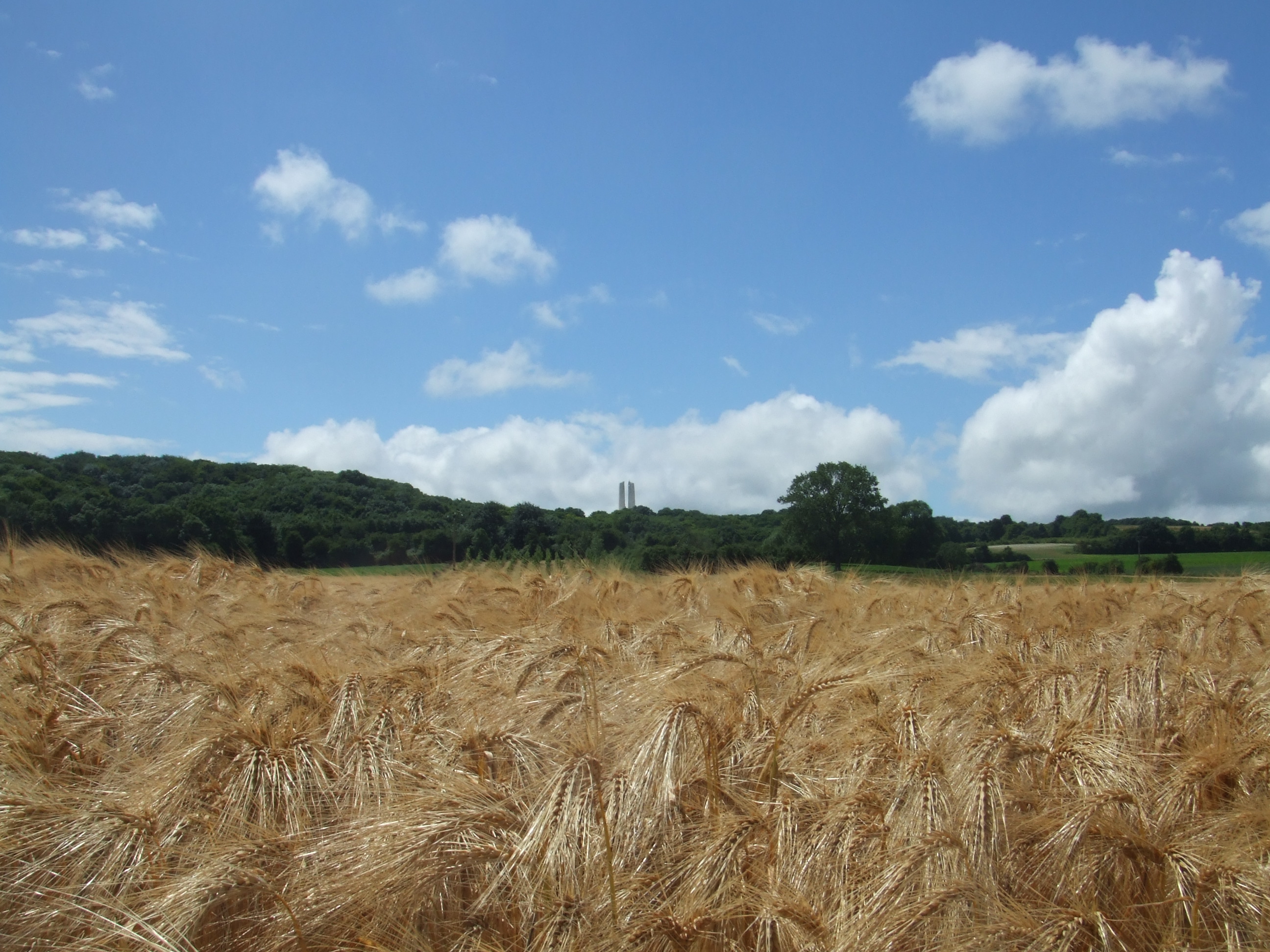 The long fields eventually turned to brush, and then a deep forest as I hiked my way up the ridge. I was most certainly taking the difficult route as the fences became taller and the forest much thicker. Eventually, I saw a bright break through the trees, just up a steep incline, and over a particularly tall fence. I then emerged out onto a field of brilliantly green grass, the sun shining warmly overhead, illuminating the massive monument ahead of me. That’s when I turned around and observed a red sign in the signature Government of Canada font that every Canadian knows so well, in both of our national languages: 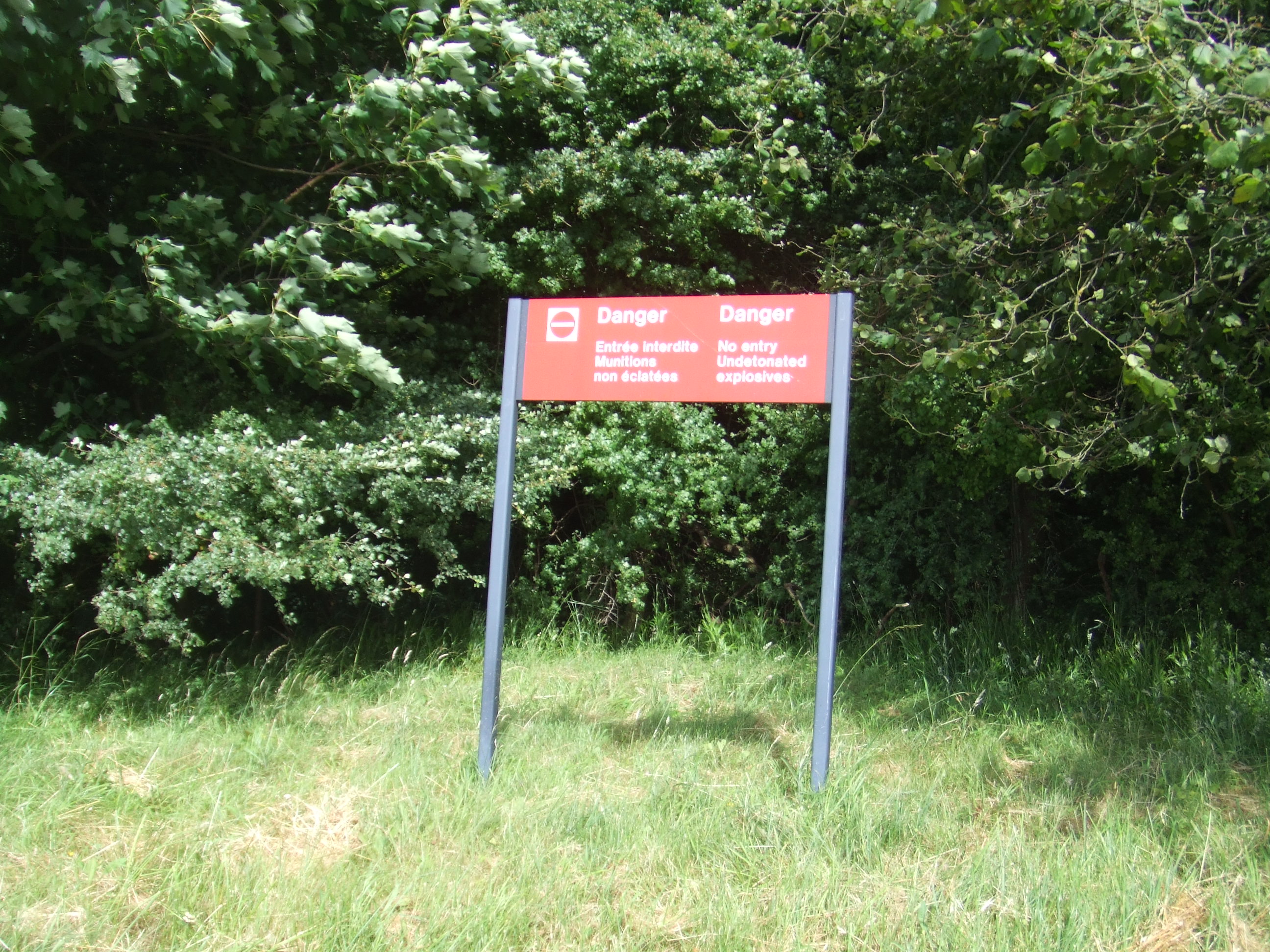 “Danger. No entry. Undetonated explosives.” That’s right, in walking up the north side of the ridge and through the forest, I had plowed right through pieces of land that were yet to be combed for possibly still-active ordinance from a bygone era. My sight then returned to the monument to take it in. I hadn’t expected anyone to be there, but it was simply crawling with people enjoying the weekend off. 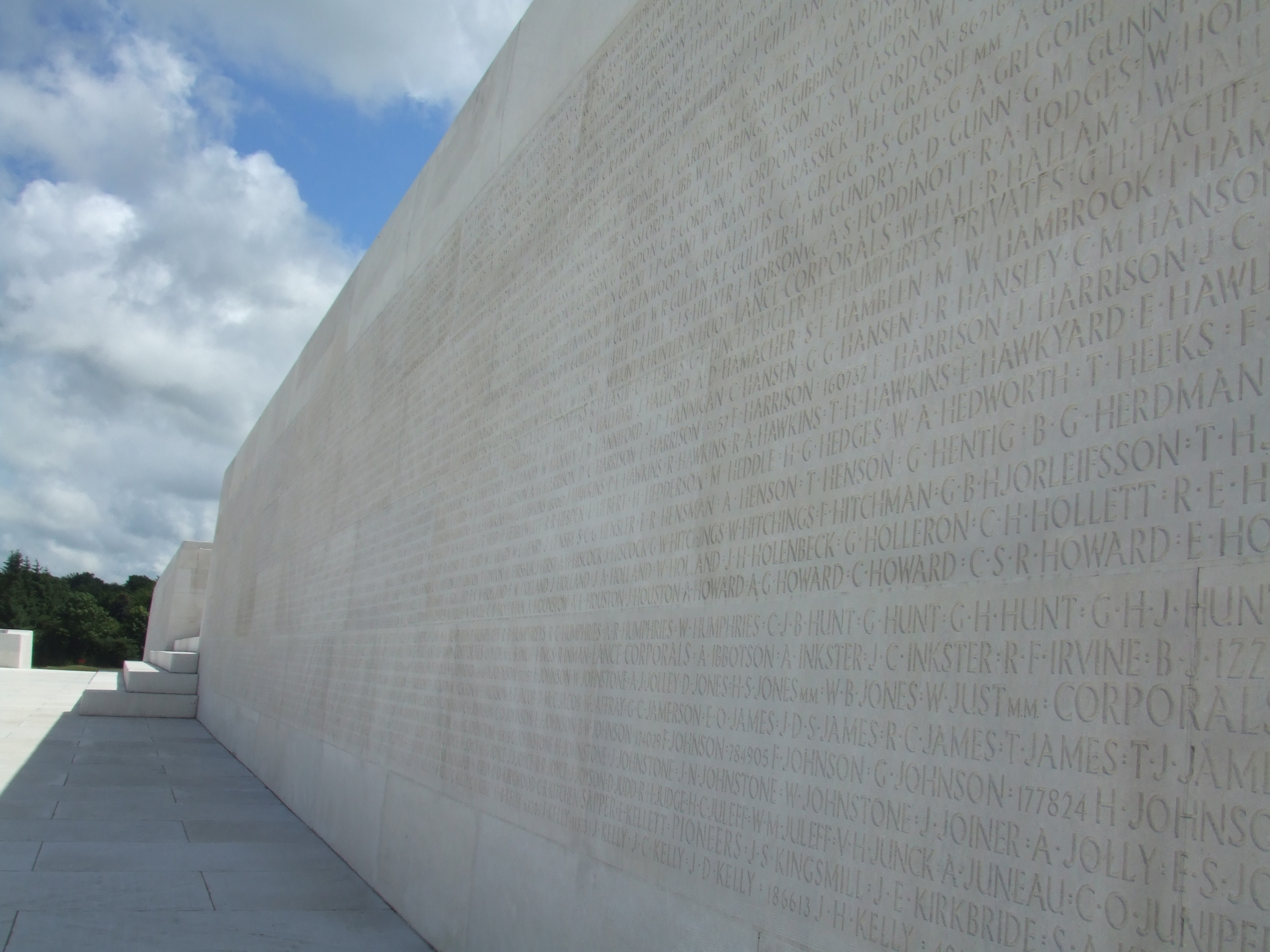 The wall that wrapped around the base of the monument was chiseled out with the names of countless soldiers who had paid the ultimate price. I took a few minutes to sit down with my back against the wall, looking over a view that let me see Lens just off to the north. A couple also took in the view a few steps above, talking quietly to one another in French. 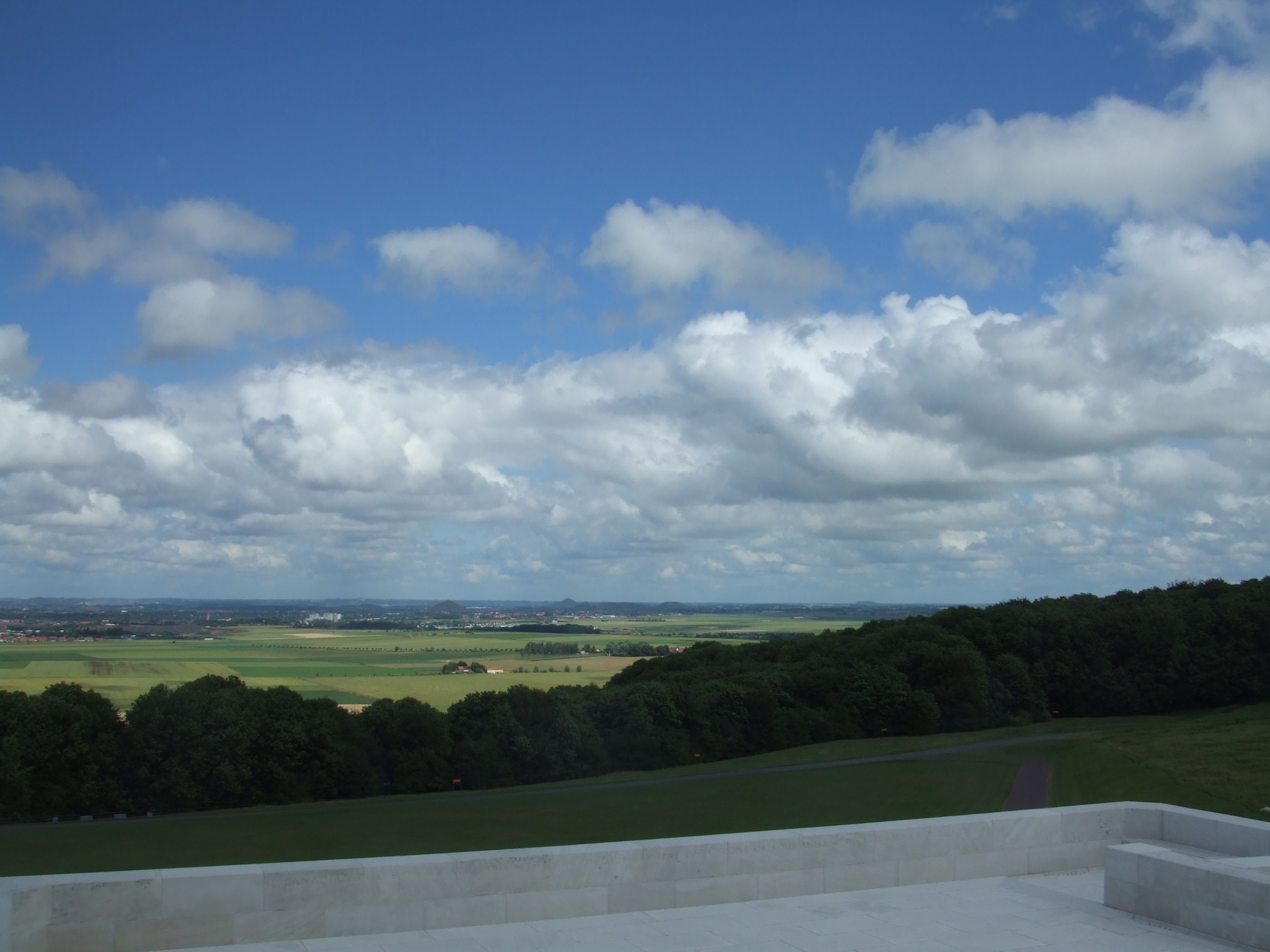 But there were people there who spoke English as well, Canadians mostly, and a surprising number given that the monument is in a remote area of France. To the east side of the monument a flock of sheep calmly grazed on the grass. I climbed my way up to the top of the steps, taking in the surroundings, again having difficulty imagining this ridge devoid of trees. During World War I, this place would be a deadly maze of barbed wire, mines, trenches, and mud. Now, families casually stroll on the paths surrounding the monument, and the loudest rapport heard on the ridge these days is not from mortar fire, but from parents telling their kids to stay away from the edge of the field where the ‘danger’ signs are.

The monument itself is huge, the tip of it an impressive 110 meters above the surrounding landscape. It shines brilliantly white in the sun, bearing over the surroundings in a way that can’t help but draw attention to itself. So impressive was this monument, that Hitler himself paid a visit and protected it throughout the duration of World War II with a special branch of SS guards. It was only for the lack of mentioning victory over Germany, in addition to its impressive architecture, that saved the monument from a demise similar to that of other World War I monuments in France.

Walking along the path, away from the monument, I spoke with a Canadian girl from Quebec for a while about how lucky we were to be able to visit such a historically significant site. I said my goodbyes and continued my way along the path, pausing for a moment to watch the modern Candadian flag fly alongside the Canadian Red Ensign that the soldiers of the Battle of Vimy Ridge would’ve fought under. 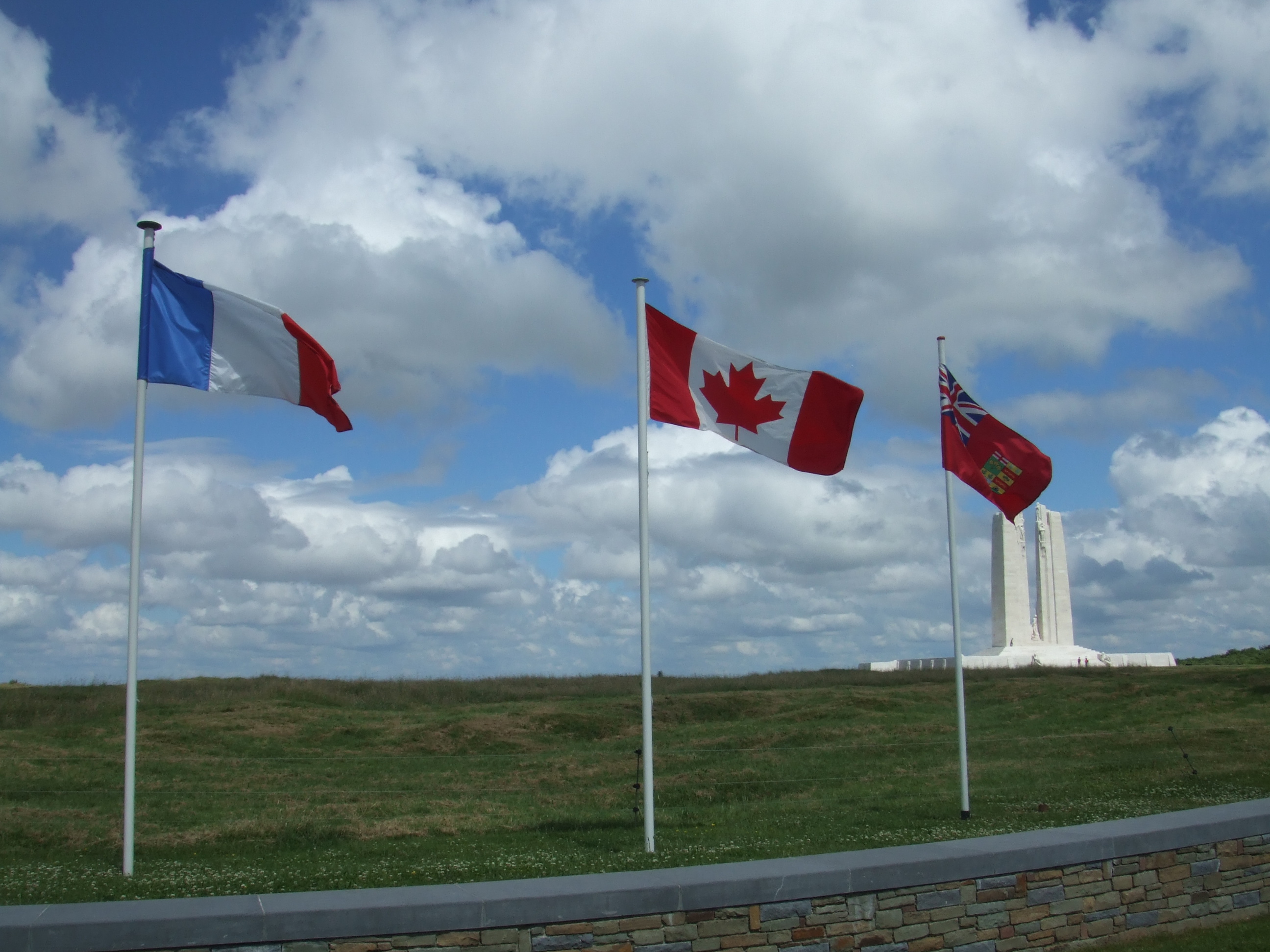 From there it was down a road to the allied side of the ridge, where a graveyard was started almost a hundred years ago. The graveyard was hastily started on the day that fighting began, in April of 1917, to bury the dead from the assault on Vimy Ridge. 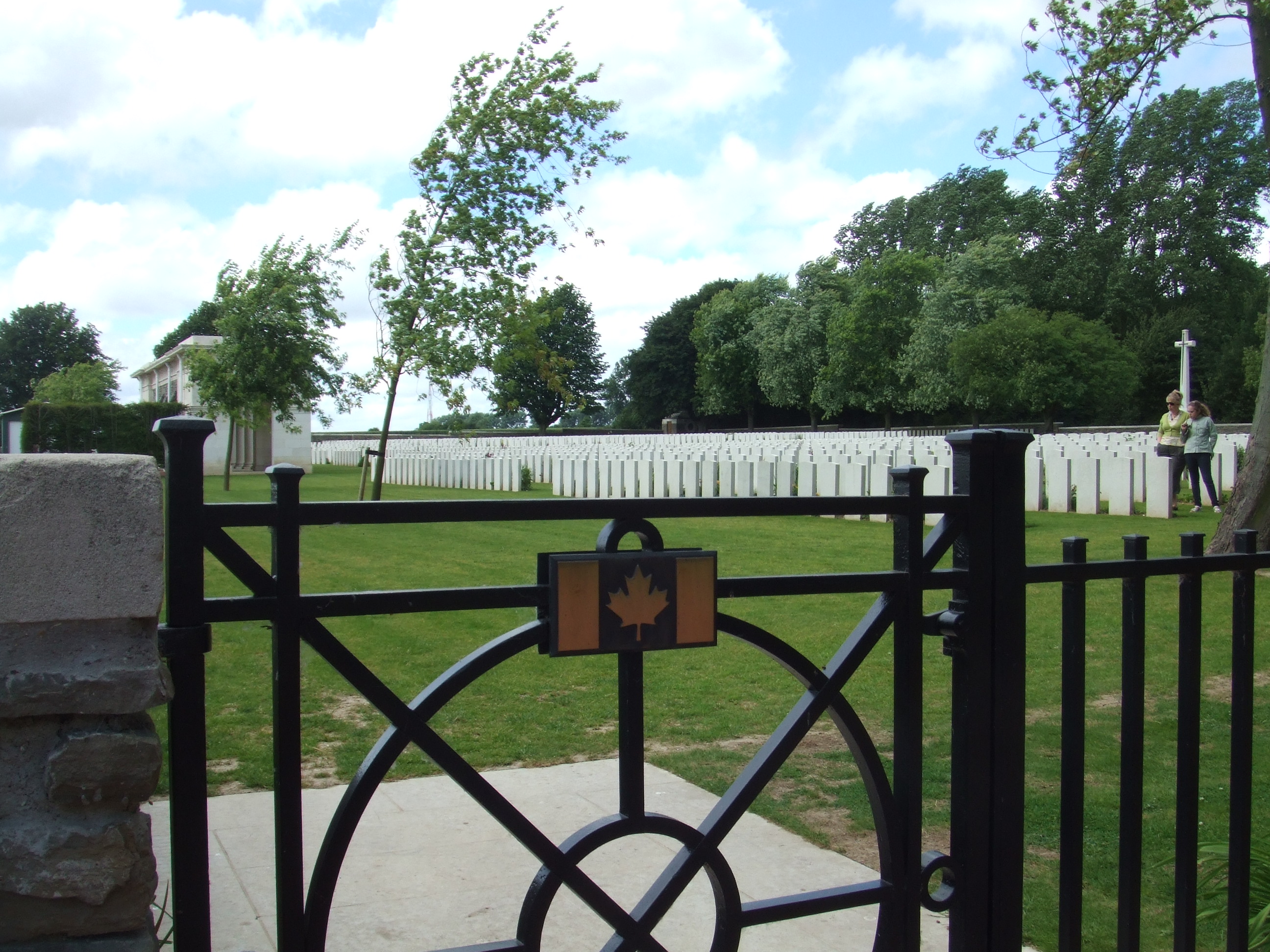 Today, the graveyard is a pristine field of white tombstones preserved by the Government of Canada. Maple leaf after maple leaf adorn the monuments, commemorating the unknown soldiers buried here. The graveyard was like something straight out of Saving Private Ryan, or the poem ‘In Flanders Fields’: “We are the dead. Short days ago we lived, felt dawn, saw sunset glow. Loved, and were loved, and now we lie…” It was an experience that I will take with me to my own grave. 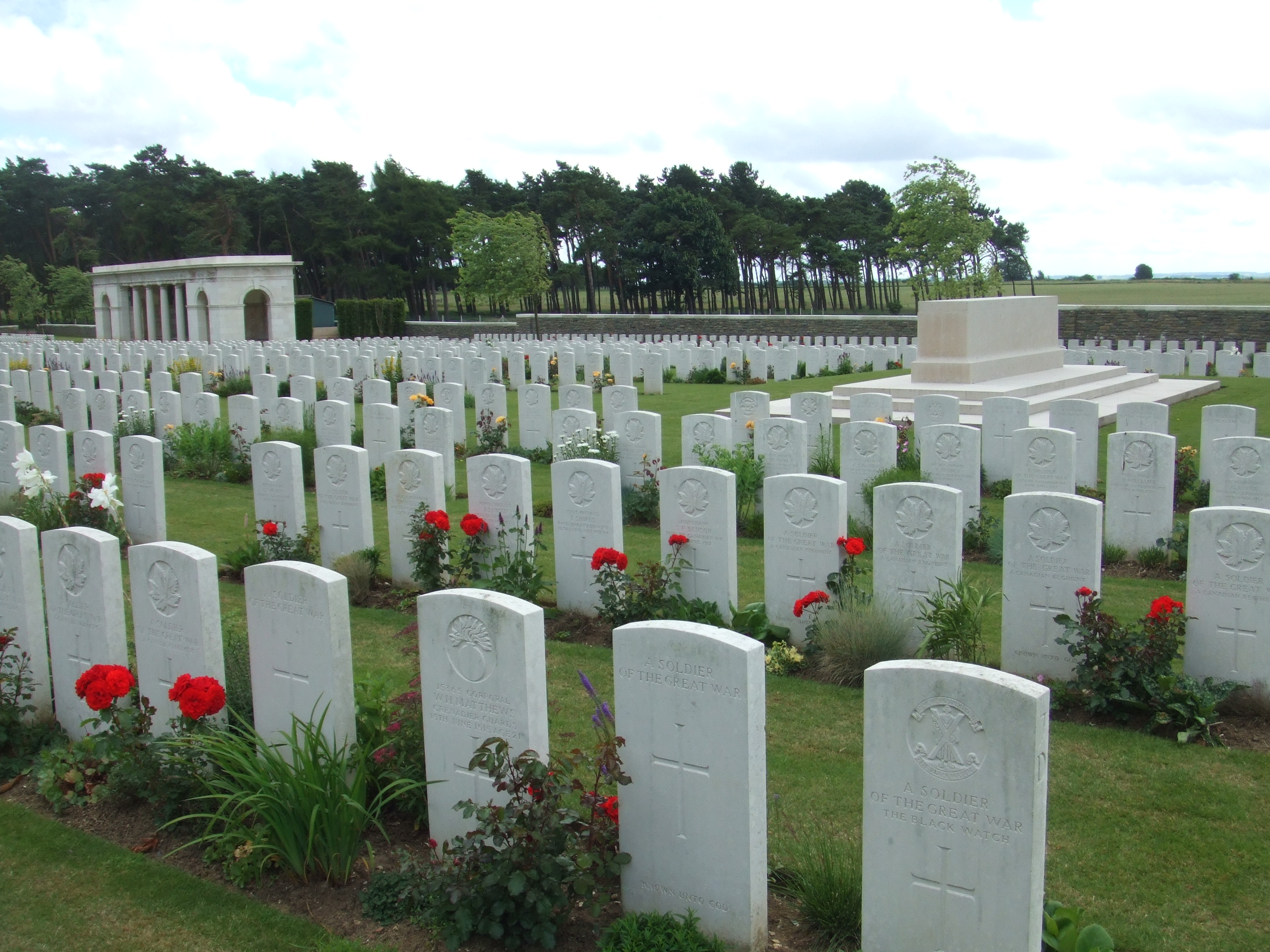 The last stop on my walk out of the memorial park was to the preserved trenches, which sit between mounds of grass, remnants of shell craters immacuately preserved by the Government of Canada. Here also sit numerous tunnels dug by Canadian troops to literally come under and around to the German side in the most unexpected of places. An interpretive center is also here, the Canadian flag flapping proudly in the wind.

As I exited the memorial grounds, I turned back to notice a sign in that iconic Government of Canada font, the same kind of sign in front of all of our federal Government buildings. But although the sign technically sits on Canadian soil, it felt somehow strange to be reading that sign, a font that I was so intimately familiar with back home, in a foreign country. It was on that note when I continued to walk south-east along the highway, along the south side of Vimy Ridge, towards the city of Arras to catch my train back to Paris. 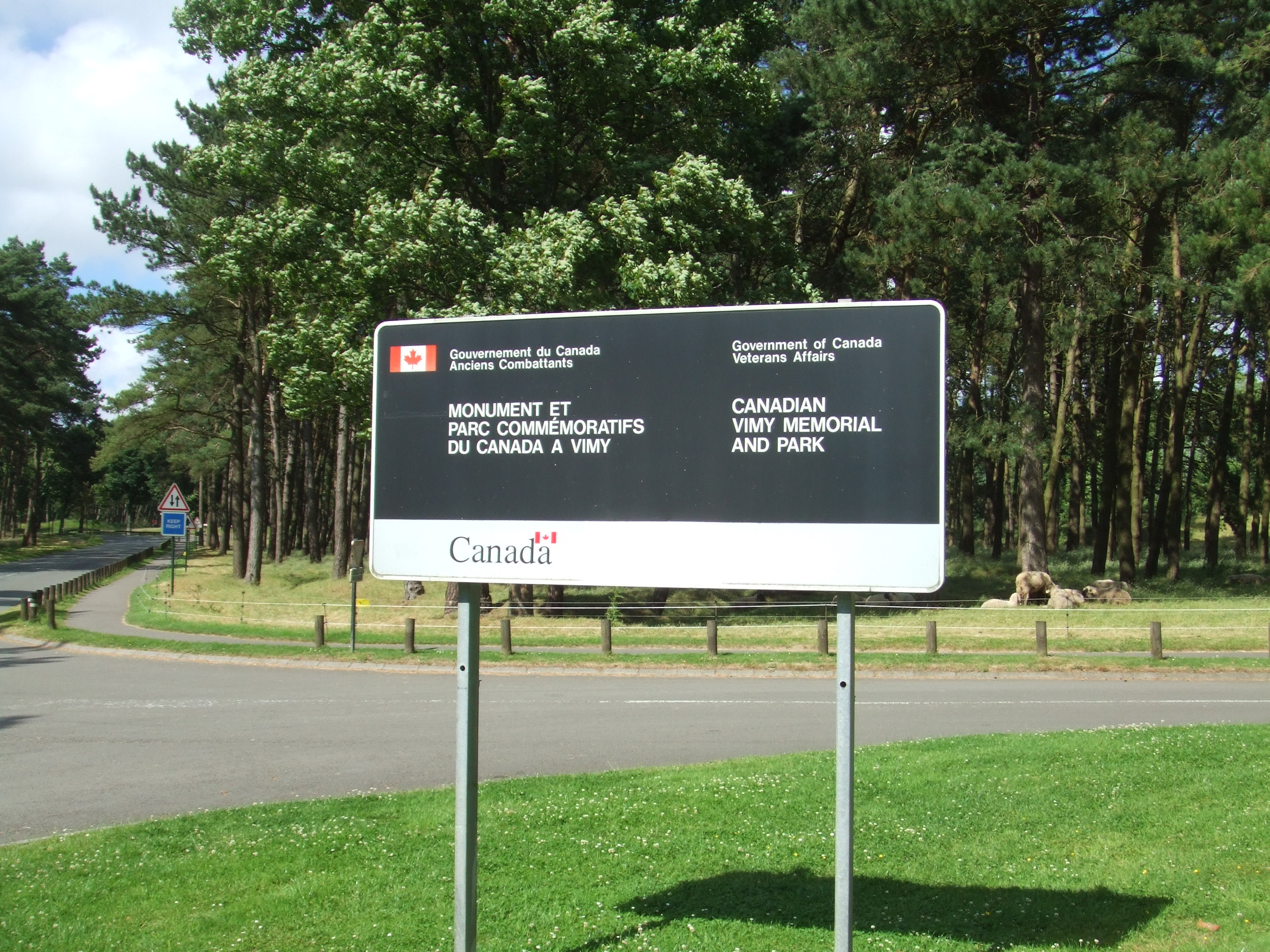 The small villages and towns that dot the landscape around Vimy Ridge have a decidedly Canadian flavour to them. For example, the town of Neuville-Saint-Vaast features a “Maple Leaf Inn” and a “Rue du Canada” (literally, “Canada Street”) Or in Givenchy-en-Gohelle, which has a “Rue du 11 Novembre”. Likewise, there’s a small village here in Alberta called “Vimy” in homage to this historical battle. Dozens of towns and cities across the country have a “Vimy Street” or “Vimy Avenue” or “Vimy Place” and so-on, a testament to the importance of this historical battle in Canadian history. To say that I paid my respects to the memorial at Vimy Ridge is an honour. 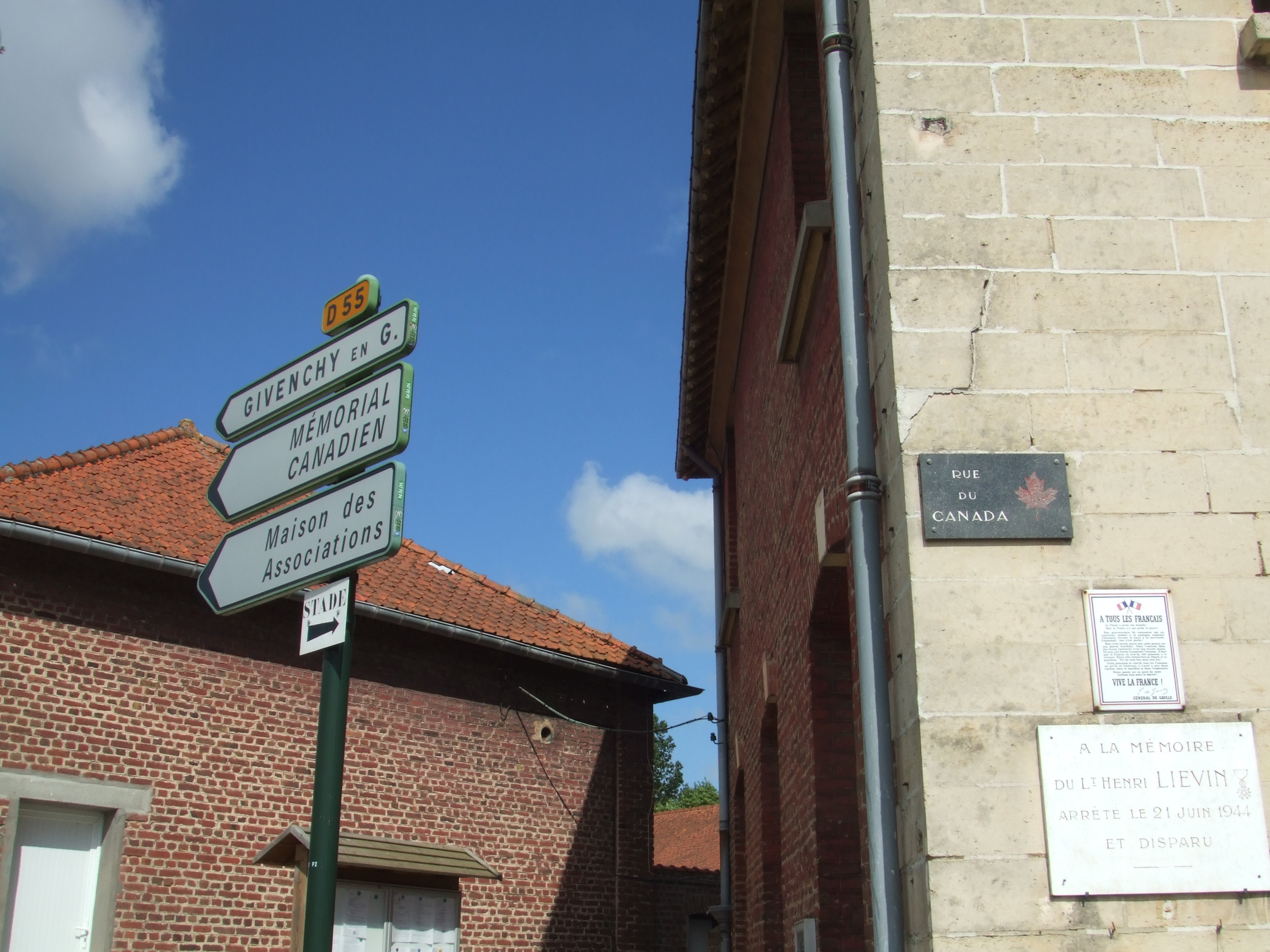